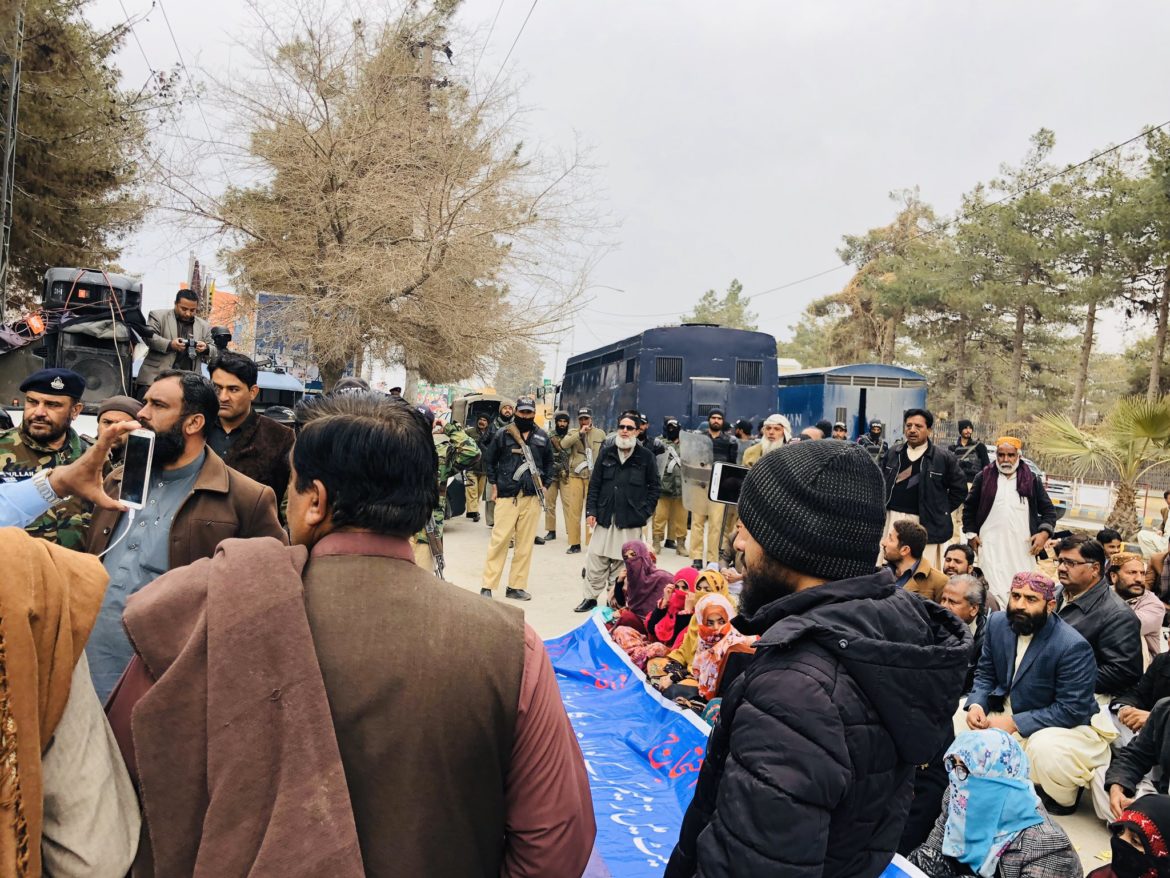 More than 50 students, including female doctors, have been arrested in Quetta, Balochistan today over a peaceful protest. The students were arrested from outside Quetta Press Club for protesting against the decision of conducting online classes, despite internet unavailability in Balochistan, GB and ex-FATA.

Higher Education Commission (HEC) decided to commence classes online despite non-availability of internet in occupied Balochistan. The protest was organized by Balochistan Students Alliance and the only purpose of the protest was to raise their voices against genuine student concerns.

Pakistan army had suspended internet facility in may regions long time back citing security issue in occupied Balochistan. #ReleaseAllStudents and #SayNotoOnlineClasses have been trending on twitter all day today, Wednesday.

A picture below shows students going to mountain tops and studying in order to catch internet signals.

Picture 1: Students from Balochistan climbing a mountain to get signals for attending a class

Picture 2: Students in Quetta being arrested for demanding termination of online classes and provision of internet

Ever since the Pandemic happened and the number of cases soared, all universities, colleges and schools were closed to prevent further spread and shifted classes were shifted online, via skype and zoom sessions.

Since the internet plays a vital role in decision of ‘work from home’ and ‘online classes’ being implemented successfully, the concerns of these students are justified. There has been a surge in digital videos, conference calls via Skype, Zoom apps and a rise in data and internet packages.

A peaceful protest is being conducted since weeks now against unbearable fees & digital divide but no one supported them. There was no violence recorded. Yet they were brutally lathi charged today. Several people have tweeted in support against this injustice and these students.

Acquiring education is the right of every citizen, be it poor or an upper class man. This is  a fight that every oppresses student must fight.

Arresting students because they protested and demanded for equal opportunities and access to online education? For how long are we going to stay silent!#ReleaseAllStudents

Without the internet students all over occupied Balochistan have been missing out on their classes. They will not be able to cover the coursework and clear exams.

Many people have condemned the arrest and mistreatment of female students and doctors. They are requesting civil authorities to give protection against such injustices; rather than  providing justice, they are tortured.

According to the publication, news intervention.com, the protesting students said: “The HEC’s decision for beginning online classes is one sided and prejudiced, which completely ignores the ground realities. The HEC’s decision makes it clear that the students of Balochistan are not the part of this education system, which is an attempt to keep away the Baloch students from education.”

The video breaks my heart. It will be remembered in the history that “hum kitab say muhabbat krnay walay hain” was answered with batons and prison vans.
ظلم کے یہ ضابطے ہم نہیں مانتے #ReleaseAllStudents pic.twitter.com/dOhzO3FpNN

Over 50 students arrested outside Quetta Press Club for protesting against unavailability of internet in Balochistan, ex-FATA and GB & the decision to conduct online classes despite lack of this facility. Text & pic via @Advjalila#ReleaseAllStudents pic.twitter.com/jMGXeb51US

Mahrang Baloch is one such peaceful protestor. She posted a video saying said that they were protesting against the unilateral decision to conduct online classes, “barbaric state doesn’t change its behaviour towards oppressed nations,” she said.

The arrest of Baloch female students protesting against Internet unavailability in wake of Online Classes by HEC, is highly condemnable. Requesting civil society to protest against such injustices. Instead of providing justice,State is torturing the peaceful protestors.@mazdaki pic.twitter.com/J7UvbyJSpe

I call upon CM Balochistan @jam_kamal to stop using force/coercive means against peaceful students, asking for solution to corona related edu crisis. You should visit the police station, release them & listen to them!#ReleaseAllStudents #ReleaseOurStudents#SayNoToOnlineClasses https://t.co/QIpoKv28OM

Students protested peacefully for many days against unbearable fees & digital divide. Not a single incident of violence was recorded. Yet, today they were brutally lathi charged & arrested.

The govt is the source of violence, terror & anarchy, not the youth. #ReleaseAllStudents

Male friends are not there now, any one can inform us where are you gyz now??? pic.twitter.com/dY2aIjPfX5

According to Baloch nationalists however, inaccessibility in occupied Balochistan is an attempt by the Pakistani government to stop news from traveling outside regarding their blatant human rights violation.

What do you think the government should do? Retrieve the decision of online classes or provide internet facility in the Balochistan areas?