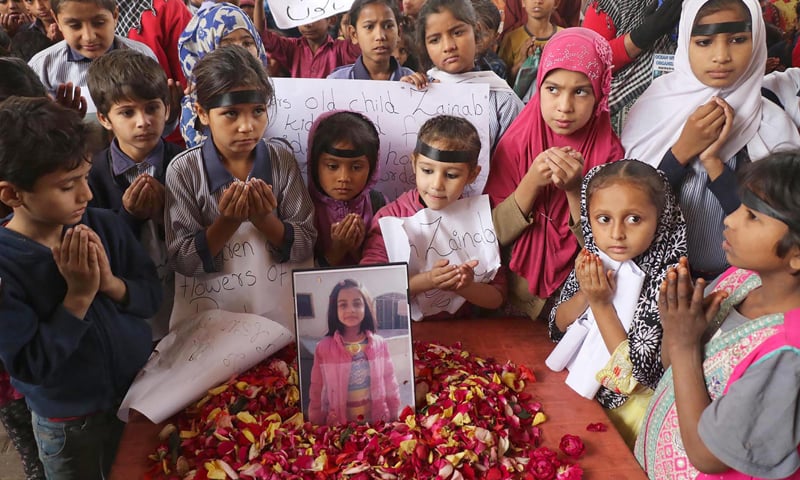 The country has witnessed over 31 cases of rape, sexual abuse/violence and child molestation in the last 24 days, which were reported and registered.  There are hundreds of incidents that still go unreported because of social pressure, shaming, fear of being harmed by the perpetrator etc.

Seems like ever since the motorway incident happened, these cases have become even more rampant and the law and order situation in the country has worsened. The criminals are still on the lose and all people want is justice!

According to a 2019 report by an organization working for child protection and safety by the name of Sahil– 2,846 children were abused cases across Pakistan that year. The number includes 778 cases of kidnapping, 405 of missing children, and 279 rape cases. A total of 3,722 abusers were identified, out of whom 2,222 were acquaintances of the victims.

The core shaking Zainab incident was reported in Kasur in 2018 and after a huge nationwide outcry and protests Zainab Alert Response and Recovery Bill 2020 was approved to avoid such incidents in the future. However, the bill hasn’t been implemented yet!

NetworkSabaat is a group of journalists working independently to cover unreported stories and social issues in Pakistan, and all they want is accountability of the implementation of the Zainab Alert Response and Recovery Bill.

To let their voices be heard , #Act4ChildSafetyNow trended on twitter all morning today!

The Zainab Ansari case in Kasur shocked the entire country. However, it is important to note that there are several cases which go unreported or are not often highlighted.@NetworkSabaat aims to uncover those cases and become voice of the suppressed.#Act4ChildSafetyNow pic.twitter.com/nIQb8Oj0XO

It’s been months Zainab alert law was enacted but there has been no progress. The proposed agency has not been set up, and the police officials have not been trained accordingly.

Another tweet said; we work tirelessly to draft legislative bills, even have them approved but fail hopelessly when it comes to implementation.

Here are some of the Tweets:

The law of our country is pretty straight forward when it comes to rape cases but why isn't it implemented? @NetworkSabaat wont sit quietly.#Act4ChildSafetyNow https://t.co/4tkyScjPzk

We cannot wait for incidents of rape and violence to make noise. A system of law and order needs to be practiced where rapist are prosecuted, without anyone protesting or demanding for it.#Act4ChildSafetyNow | @NetworkSabaat | @MoIB_Official

Pakistan's real problem is the justice system. If we improve our judicial system, many of Pakistan's problems will be solved automatically. Justice should be given only by the courts and not by the parliament or other institutions. #Act4ChildSafetyNow pic.twitter.com/bhv3iRDnNr

We cannot wait for incidents of rape and violence to make noise. A system of law should be implemented on Provincial and national level. #Act4ChildSafetyNow @NetworkSabaat@MoIB_Official pic.twitter.com/jEq7bp05rN

Zainab’s rape and murder in 2018 had sparked outrage and protests across the country after she was found dead in a trash heap in Kasur on Jan 9, 2018, zainab alert bill was passed 2 yrs later, but hasn't been formulated which is worrisome #Act4ChildSafetyNow@MoIB_Official pic.twitter.com/Dh8W4b0PBd

Another tweet highlighted how most of the perpetrators and child abusers are people these children are familiar with and have easy access to – such as family members, relatives, etc.

Sadly, most of the children who become victims to child abuse, sexual abuse, molestation or even rape are the ones who already know these attackers as they are mostly relatives. May Allah protect us all from such people #Act4ChildSafetyNow @NetworkSabaat pic.twitter.com/KicygCv3SI

According to the Zainab Alert Law and bill passed in the Senate, a case would be registered within 2 hours of complaint made by parents regarding child abuse and a special agency will be created to report on missing children and maintain an online data base. Moreover, trials in courts will have to be completed within three months. Do we see all this happening? The recent Marwah incident is proof that the law has not been implemented!

The Act also calls for the creation of a special agency to issue alerts on missing children & maintain an online database of cases. Police will also have to register cases within 2 hours of receiving a complaint by parents. But do all of us know that? #Act4ChildSafetyNow

Under Zainab Alert Bill, trials in special courts will have to be completed within three months.

Sounds swift on paper. In reality is this happening even? @MoIB_Official @NetworkSabaat#Act4ChildSafetyNow

While the law’s implementation is still awaited at a national level, there has been some progress on an individual basis when it comes to the safety of children.

Before the law was passed by Parliament in March 2020 , the Sindh Police had already introduced the Zainab Alert App which aims to respond to complaints of missing children.

The overall issue of children’s safety and the implementation of the Zainab Act has taken a backseat since the coronavirus pandemic.

Here is to hoping the government implements the measures laid out in the new law and doesn’t wait for yet another harrowing incident after Marwah, to stir the law into action.

Does the fault lie in our judicial system? Do we have to wait for such incidents to be repeated in order to protest and raise our voices? Share your thoughts in comments below.

7 TikTok Beauty Hacks That Will Make Your Life Easy