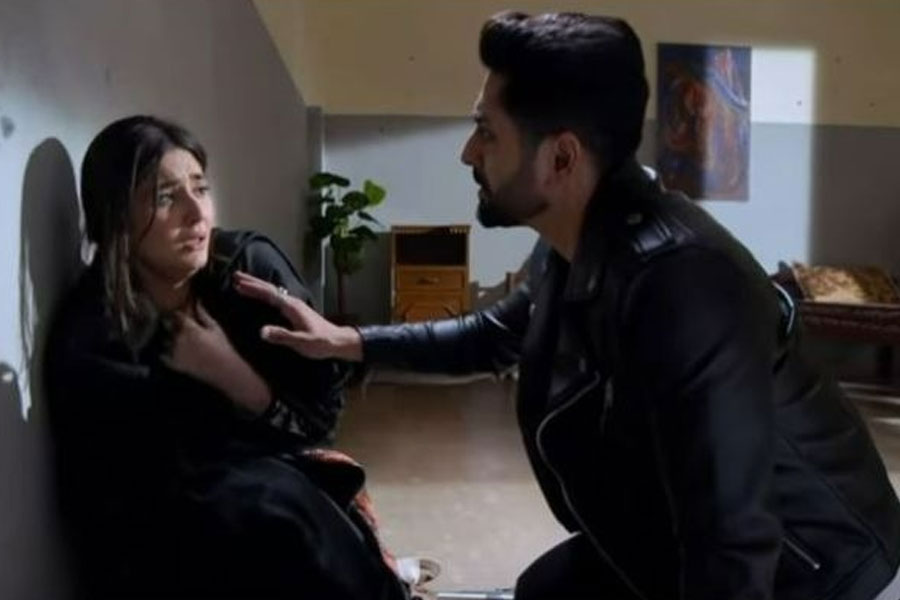 Pakistani Drama ‘Kaisi Teri Khudgarzi’ has landed in hot waters after netizens called out the TV serial for its toxic storyline.

The script has been accused of glorifying abuse and openly showing that men can forcefully marry and bully women if they want to.

Moreover, given the recent events of harassment and how #JusticeForKhadija is already trending, this is adding more fuel to the fire.

The drama serial starring Danish Taimoor and Durefishan Saleem portrays a crazy ashiq Shamsher played by Taimoor who is romanticized as a love-struck spoiled brat who simply cannot take no for an answer. To make it worse, the character of Mehek (Duresifhan) is shown as a weak woman who is powerless against Shamsher.

What’s even more disgusting is that the storyline justifies his actions and normalizes his delusional behaviour. But the audience has now had enough. Netizens are now calling for a ban on the show.

Dramas like #muqaddar #kaisiterikhudgarzi and similar are somehow also responsible for the incidents that happen in our society, you cant change my mind #justiceforkhadija @aamnaisani @hassanchoudary you guyz do a great job in criticizing such stuff, please do it more fiercely

As a character, Shamsher in #KaisiTeriKhudgarzi – played by Danish Taimoor – is rich, obsessive, aggressive, entitled & self-confessed to be mentally unstable. Men like Shamsher do not turn into Prince Charmings. They turn into assaulters, offenders; they turn into Zahir Jaffers

I haven't started watching Kaisi Teri khudgarzi and never intended to, but yesterday I watched episode 15 with my colleague. While reading the comments, it was so hilarious to see how ladies were romanticizing shamsher's obsession. This isnt LOVE. Love can NEVER be forced.

Ma'am have you seen an ongoing drama on ARY #kaisiterikhudgarzi same is being shown in that too and guess what people are appreciating acting skills of an elite hero who is forcing a poor girl to get married with him, so media is teaching this kind of behavior by glorifying it

Just wanted to say that I’m proud of these results…..even if I’m really worried for 22% of you. Men like Shamsher destroy lives. #KaisiTeriKhudgarzi #PakistaniDramas https://t.co/xEE1IsdAdN

tell me she was talking about #kaisiterikhudgarzi like i thought Shamsher would change after mehak’s fake death. but no. ‘agar tumhe phir bhagne ki koshish ki toh mein tumhe apne haatho se khud marunga’ whatever. the show so shit, i stopped watching after that🙂#danishtaimoor https://t.co/4v7KqzRvqs

A user pointed out the same and said that a societal change needs to come otherwise productions and channels only care for money.

Kaisi teri khudgarzi gets millions of views in a few hours, trends on top on yt, gets highest trps – need societal change for these dramas to end. They are not stopping otherwise because producers and channels are 🤑🤑🤑 responsibility ka naam o nishaan nahi https://t.co/7Prpjd89yG

In an interview, actress Urwa Hocane opened up about how drama nowadays has glorified abuse and toxic masculinity, and that stories nowadays are all about romanticising negative characters. Moreover, she added that the girl does not step up for justice until the 40th episode instead of raising her voice from the first, which is setting the wrong example for our youth.

Written by Radain Shah and directed by Ahmed Bhatti, the ensemble cast for this drama includes veteran actors Naumaan Ijaz and Atiqa Odho as well.

Do you agree with Urwa, moreover, do you think such storylines are encouraging the youth of Pakistan to romanticize harassment and assaulters?