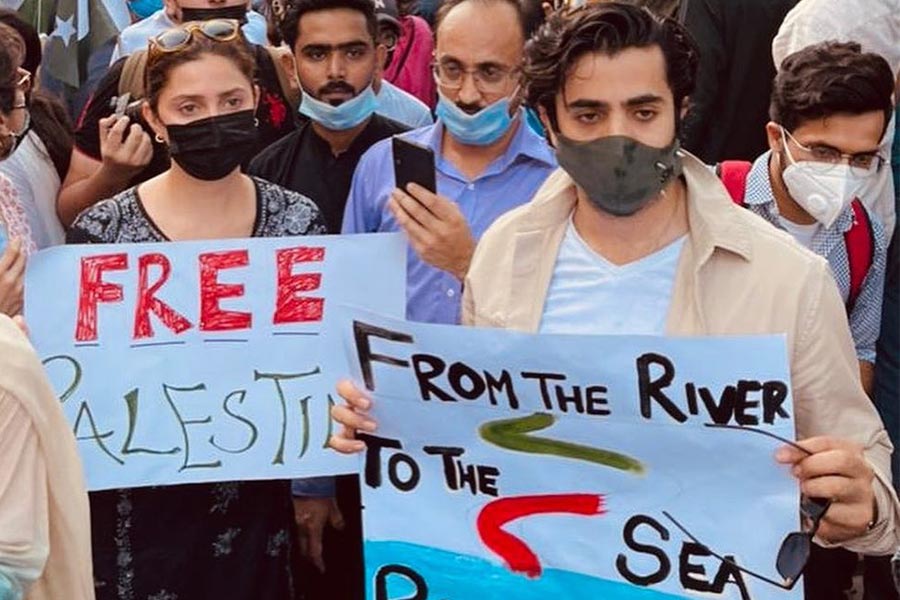 In Karachi, thousands of people gathered on the streets today to protest the Israeli war crimes against Palestine. The protests took place in many cities of Pakistan today, where people walked with pro-Palestine slogans that condemned Israel’s heinous crimes and shamed its defenders.

The protest came out after huge crowds came out on streets across the world to protest the Israeli attacks on Palestinians living in Gaza. These protests took place in the US, Australia, Canada, Europe, and the Middle East, with protestors marching with pro-Palestine signs. Among common people, celebrities and influencers also made their way to the protest.

Mahira Khan and Shehryar Munawar were spotted together at the protest with their signs that said, “Free Palestine,” and “From the river to the sea, Palestine will be free.”

Hania Aamir was also spotted at the protest draped in the Israeli scarf called keffiyeh — a scarf with the traditional Palestinian print. Her sign said, “We Can’t Breathe Since 1948. Sincerely Palestine.”

Ashraf was spotted with Ayesha Omer at the protest. She took it to her Instagram and said, “ANYONE who supports a stance on this forceful takeover not sparing children, women or even the elderly is a part of the problem.”

Sarwat Gillani wasn’t able to attend the protest but raised her voice on her platform and was with us today in power!

Whether you attended the protest or not, you have a platform that you can use to raise your voice against the injustice taking place in Palestine.

Not only is Bella protesting out on the streets of NYC, but she’s also educating people about Israeli atrocities by using her 42 million followers strong Instagram account. It surely is the true loyalty to mankind and her Palestinian roots.