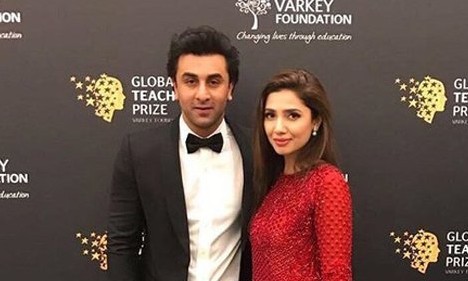 Pakistani heartthrob actress Mahira Khan has again been spoken about alongside Indian actor Ranbir Kapoor on social media. Yes, it is about the photos taken somewhere in the United States a few years ago where Ranbir and Mahira are seen hanging out together.

Khan had never officially addressed this particular controversy as someone violated her privacy outside of work until she was invited to Vasay Chaudhry’s talk show some time ago. In a cryptic manner, Chaudhry reminded Mahira of those images and wanted her to speak on the topic, to which she replied, “What is the question?”.

Chaudhry then went ahead and asked the actress,  “How did it affect you?”. Khan replied, “Oh, it still shows up everywhere no matter what I say”.

“It was the biggest learning experience of my life, that kind of trauma that you can experience because it wasn’t just social media, it was headline news every day”.

Vasay then added, “I don’t think it wasn’t as big of a deal to turn it into a headline”. Mahira then said, “Well, that’s what they did, and I went through something big because it was a personal moment, not a professional moment”.

Mahira and Ranbir were then seen together in London, attending an event and were photographed together by the press, which raised many questions again on social media.

Pakistani heartthrob actress Mahira Khan has joined forces with the international #JoinTheChorus campaign with No More, Commonwealth, and Gentle Forces to raise awareness on sensitive issues such as domestic/sexual violence. The star announced her association on her Instagram by posting numerous posts. She wrote in the first post, “We either know of or have experienced first hand some abuse or sexual/domestic violence.

10 Facts About Expo 2020 Dubai That Makes it Unique