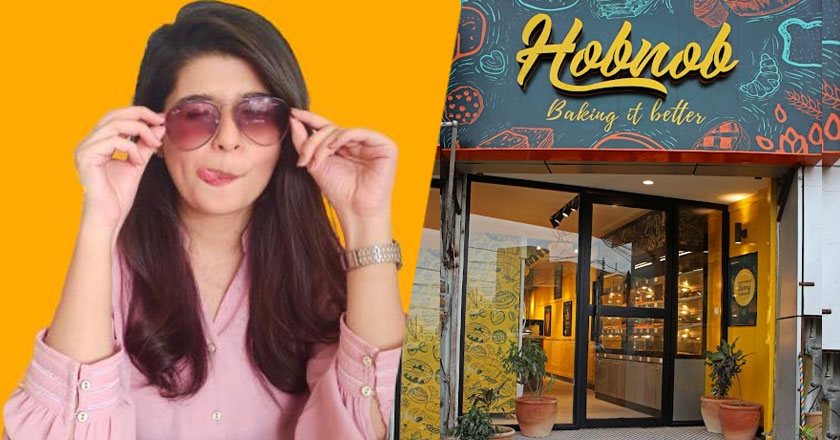 On 30th July, 2022 self-claimed ‘certified dessertarian’ Fizzah Masood, who also goes by the Instagram handle @sweet.all.things, posted a rant on the Facebook Page ‘Voice of Customer.’

The post was about how the influencer was ‘utterly disgusted’ when she placed an order at the Sindhi Muslim (SMCHS) Hobnob Bakery branch, a caramel tart to be more specific.  Around 30-minutes later, it arrived to her, she reportedly noticed that there were some peculiar marks on the filling, which looked like a rodent’s footprints.

She further claims that she immediately complained about the incident on the app, but allegedly received no response from the other end. Fizzah further goes on to say that she will never order from there again and has ‘banned’ herself from the bakery.

Utterly disgusted to my core by the hygiene standards maintained by the renowned HOBNOB. I was craving something delicious, and what caught my temptation was a caramel tart from Hobnob Smchs. My order arrived in about half an hour but the defining moment was yet to come!

God knows the delipidated standard of cleanliness in Hobnob, I will never forget this sickening experience of this bakery that sprawls all over Karachi Hobnob! I immediately complained about it on the app but got no response. No wonder some of you would have actually eaten items from here only because it had a hard surface and footprints didn’t leave a mark.

Clearly, the brand doesn’t care about food safety or risking their customer’s health, just busy minting money. It’s not something that came straight out of the kitchen, there are many individuals involved in the process of making it to delivery and no one bothered to check the quality. Not going to order again, never never never. Given the low hygiene standards, I have now banned myself from this place.

The picture is attached for reference. Hobnob not baking it better! 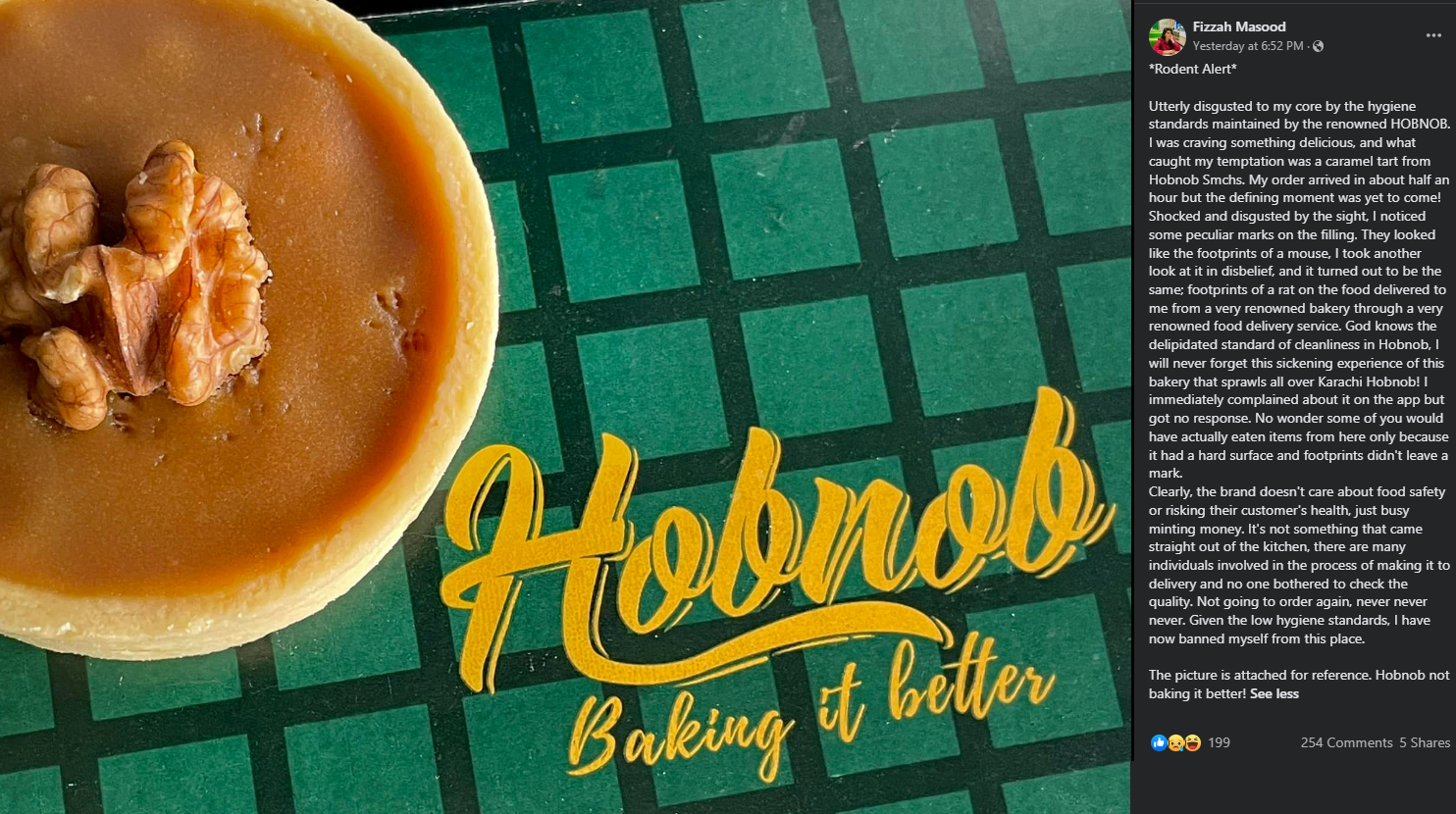 As a response to the allegations, Mariam Akberali responded with a statement on the same Facebook page, stating that when a customer has a negative experience, they are contacted immediately and the issue is resolved. Moreover, they are compensated or the product is immediately replaced as per SOPs.

However, Mariam claims that Fizzah has ran a smear campaign against the reputation of the bakery, not only did she post on Instagram, and Facebook page ‘Voice of Customer’, but also on ‘Karachi Food Diary. It doesn’t end there, Mariam also shares a screenshot of the rant as a sponsored post by @Sweet.All.Things.

Mariam continues to pen, ‘As the owner, devastated to see such a terrible experience suffered by a customer, I called her right away and spoke to her. I tried to understand how it could be it be possible- the tarts are placed in the cold display and the outlet she purchased from is one of our strongest. She said that she would edit her post with a note saying that we reached out to her but she did not and continued to engage with comments on the posts.’

The next thing I see is a sponsored post on by Instagram by Fizzah’s page Sweet All Things promoting her negative feedback- paid promotion of a negative experience that has not yet been proven. And a crucifying post on Voice of Customer, with many writing in about their negative experiences for which we were never contacted so there is no way for us to understand what might have actually happened.
Are these seeded commenters? Are we doing everything wrong? Is it productive to perpetuate hate against businesses that are doing their best to put out the best possible products at this very difficult time for our nation?
Should we as a brand take any hit, any smear thrown our way and say nothing? Because there is no way to know what is true and what is not? I will not allow anyone to attempt to hurt a business we have built up with the best of intentions and sheer hard work.
To everyone on this platform— PLEASE do not participate against a smear campaign against ANY brand. If something terrible’s happened, let the brand know! 9/10 times they will fix it right away. And if they reach out to you, with a promise to make things right immediately, please do not put money behind your negative feedback on your business’/ influencer page live stories. Unless of course you are being paid to do it.
Thank you. 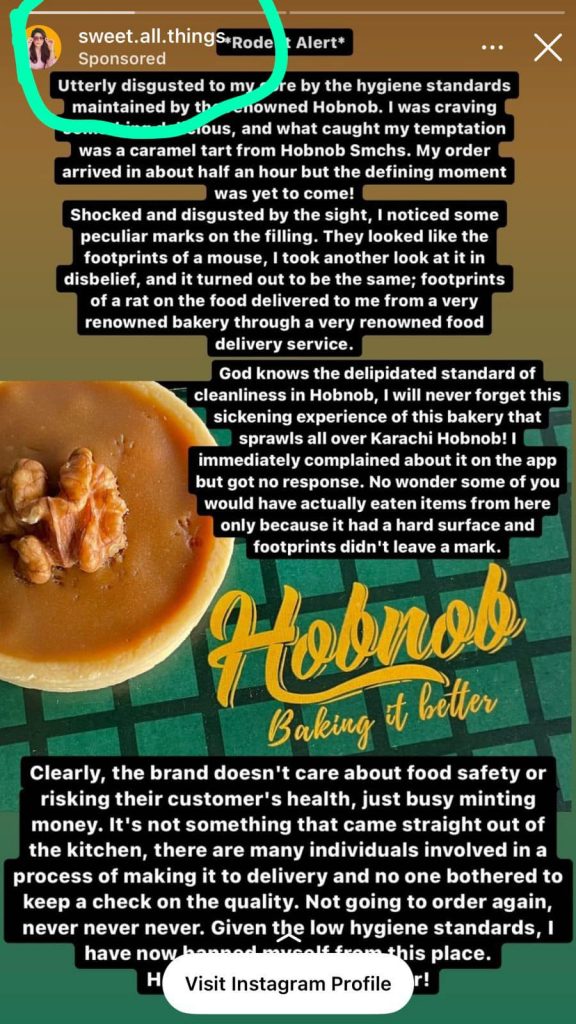 What Does Social Media Think?

Here are social media’s two cents on the incident: 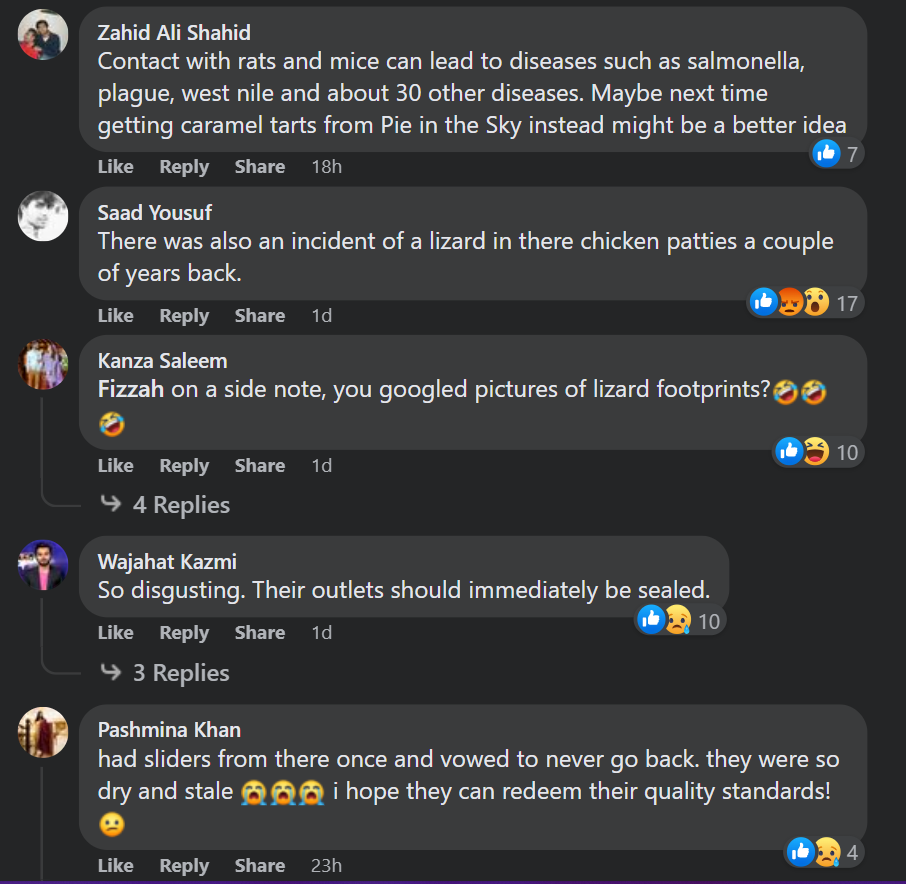 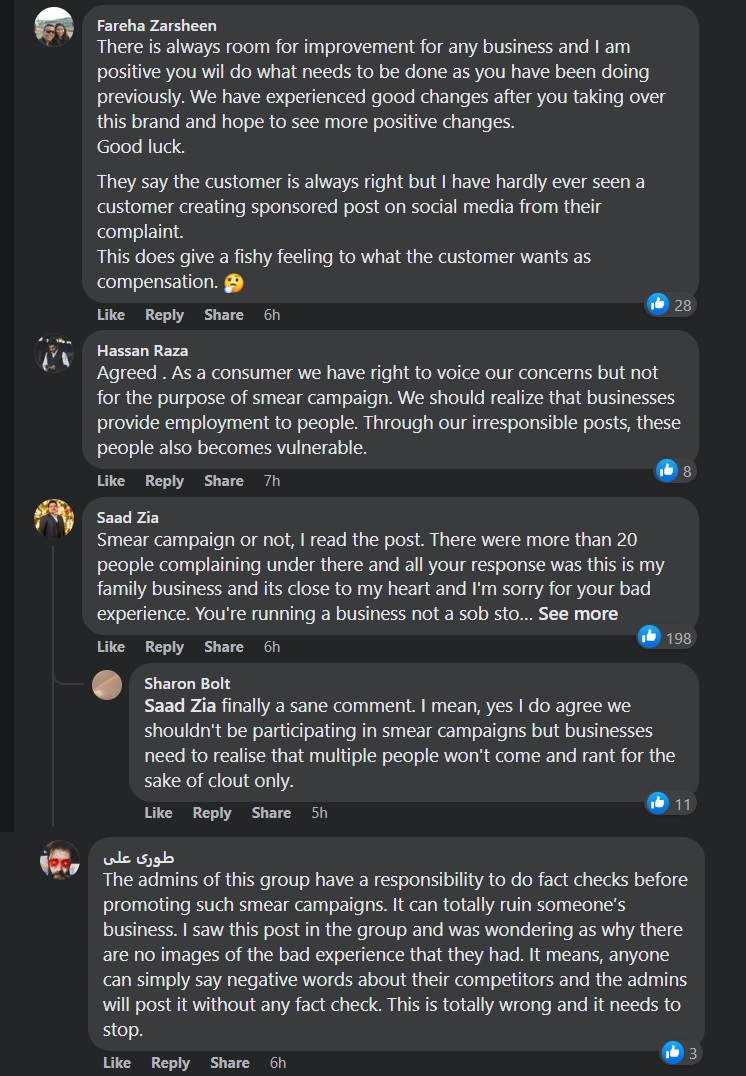 Who do you think is right in this situation? Share your thoughts with us in the comments below.