Sunday, June 26 2022
Top Posts
3 DIY Hotpot Recipes You Can Make at...
5 Tips to Keep Your Hair Sweat-Free During...
Fawad Khan to Make Debut in Ms Marvel...
“Women Can Accomplish Anything They Set Their Mind...
TikTok Releases First Album of Viral Hits
Mehwish Hayat Makes Her Debut as a Djinn...
‘Girls are No Less Than Boys’ Says Pakistani...
Punjab Government to Provide Scooties to All Female...
Is Akshay Kumar’s Upcoming Film ‘Raksha Bandhan’ a...
On This World Music Day, Spotify Celebrates K-Pop...
FeaturedMedia MarketingTrailblazer 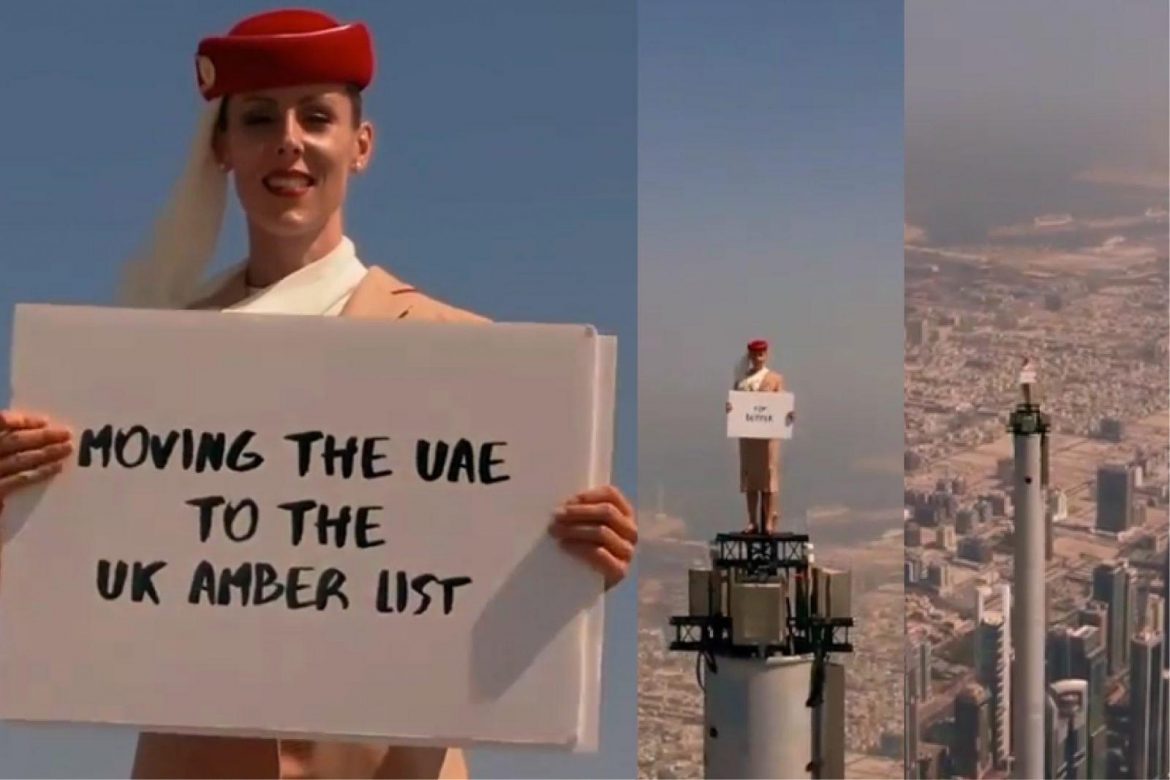 We all know how the airline industry has suffered immensely from the beginning of the pandemic. Now, as the world is learning to live with it, Dubai International Airport (DXB)-based Emirates Airlines decided to kick start its latest ad campaign with a blast.

For its latest campaign, #FlyEmiratesFlyBetter’s ad, Nicole Smith-Ludvik performed a stunt by being dressed as an Emirates flight attendant and standing on top of the Burj Khalifa. The Burj Khalifa, at 828 meters (2,717 ft), is apparently the tallest building globally and not a place you would want to fall from.

The ad announces moving UAE to the UK’s Amber List, which means Emirates will now fly to the UK with its passengers. The caption said, “Reconnect with your loved ones or take a fabulous vacation. From 8th August travel to the UK gets easier,” which of course has made emirates feel they are on top of the world (quite literally!).

Watch the Ad Yourself

Reconnect with your loved ones or take a fabulous vacation.
From 8th August travel to the UK gets easier.#FlyEmiratesFlyBetter pic.twitter.com/pEB2qH6Vyo

Many also wondered if the Ad was shot in a studio in front of a green screen and not on top of Burj Khalifa. Emirates uploaded a clip revealing the ‘behind the scenes” to record this jaw-dropping ad and also to clear the suspicion.

The captain said, “Here’s how we made it to the top of the world’s tallest building, the @BurjKhalifa.”

Real or fake? A lot of you have asked this question and we’re here to answer it.
Here’s how we made it to the top of the world’s tallest building, the @BurjKhalifa. https://t.co/AGLzMkjDON@EmaarDubai #FlyEmiratesFlyBetter pic.twitter.com/h5TefNQGQe

Twitter users were stunned to learn that the Ad was actually shot on top of Burj Khalifa and that this was truly a daunting task for an ad.

@emirates This is amazing! Scary! 😱 https://t.co/OTlTLMIBcY

I hope they paid this woman a million bucks! https://t.co/MJxK0wXG6x

Wow… this takes an incredibly brave person to do this!!!! (Note: video is real, no green screen was used!)https://t.co/gY2thiGD62

Sweaty palms? Lol, the Hoover Dam is leaking over here!

I admire the fact that people are not afraid of heights and can engage in such stomach-wrenching thrills, but it's so not for me. I felt queasy when the camera zoomed out in the main ad.

Sarah Al Amiri has become the youngest female Muslim scientist to Lead UAE’s mars mission. UAE was one of the nations that successfully entered a spacecraft into orbit around Mars on the first try after India and the EU. In UAE, leading the expedition was deputy project manager is Sarah bint Yousif Al Amiri. She is a 33-year old Iranian-born is a computer engineer.