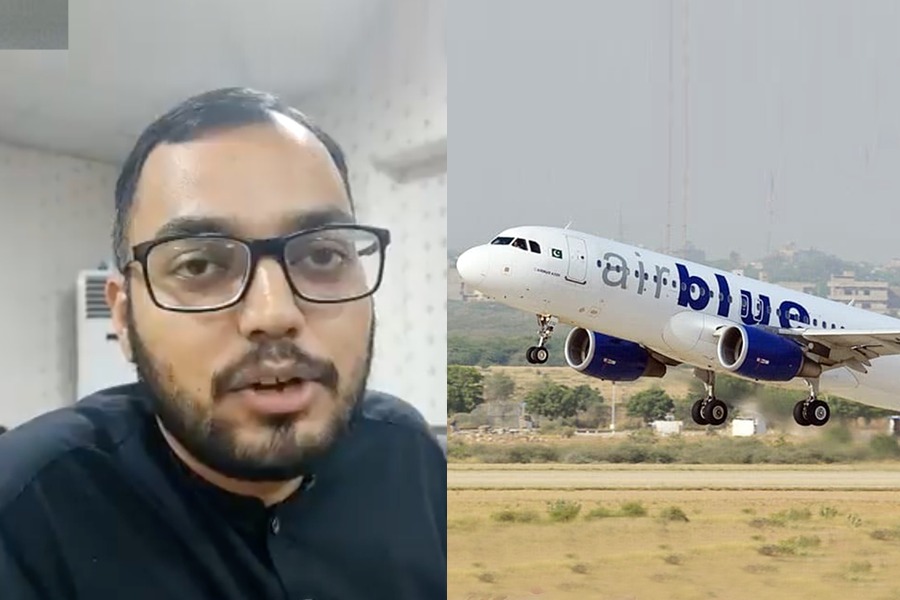 Public display of affection is not something we often witness in Pakistan or other Muslim countries as strict laws apply. Those who dare to cross the law are heavily fined and jailed as well.

A video of a passenger from an AirBlue flight has been making rounds on social media where the passenger narrates his encounter with a couple on a flight on the 20th of May from Karachi to Islamabad. According to the passenger, the couple was busy getting intimate on the plane.

In Pakistan, under section 294 of the Pakistan Panel Code (PPC) states: “Whoever, to the annoyance of others; a) does any obscene act in any public place, or b) sings, recites or utters any obscene songs, ballad or words, in or near any public place, shall be punished with imprisonment of either description for a term which may extend to three months, or with fine, or with both.”

Naturally, the families sitting around them didn’t feel comfortable and complained to the cabin crew about their behaviour. Much to their surprise, even after the air hostess asked them to stop, they started kissing. Upon another complaint, the hostess handed the couple a blanket, so they don’t make other people uncomfortable on the flight. They continued with their lewdness under the covers.

At the end of the flight, the couple stood up to tell people who complained to the crew that they have no right to interfere with their privacy.  The passenger submitted a complaint to the airline but didn’t receive any response as yet.

The story is for sure comical, so it did divide social media and cause a debate on whether the couple was right or wrong. Many also created memes and other jokes on Twitter just for a good laugh and to remind people of their hypocrisy.

The same people would have been watching pornographic movies 15 minutes ago with VPN and now they are criticizing a couple doing kissing. #airbluekissing#Airblue pic.twitter.com/R7mX9E3V4j

We love a good meme!

“A sad man whines about a couple kissing in the plane. A sad nation joins the while”

A sad man whines about a couple kissing in the plane. A sad nations joins the whine. #Airblue

Everything wrong with us:

Desi couples make sure they fight like dogs in front of children, but anything even remotely intimate will be limited to the bedroom. What do you expect from an entire nation that grew up watching hate normalised and acts of love labelled as shameful?

This will be funny, even for the investigators!

More support for the love birds

I absolutely love the couple who kissed on the flight. Wish my parents kissed in public. Pakistanis hate love cuz they only grew up seeing their parents fight. Affection is something they aren’t aware of.

This is the guy who was kissing his wife and doing inappropriate things on a local #Airblue flight, shame on him , Is this Islamic republic of Pakistan? pic.twitter.com/Ko4GLaicGS

The amount of attention #airbluekissing is getting is concerning but at the same time those who are justifying this act are unbelievable.. #فحش_میڈیا_کو_لگام_دو pic.twitter.com/lD91tUVfXe