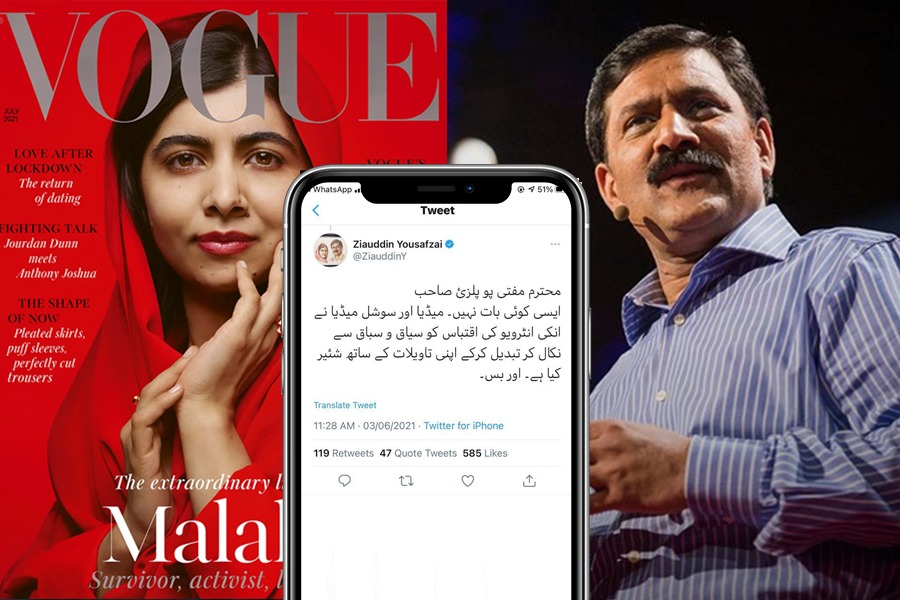 Malala’s father, Ziauddin Yousafzai, has cleared on social media that recent comment of her daughter from British Vogue’s interview was taken out of context, twisted, and circulated on social media with sinister interpretations.

Malala’s recent interview with British Vogue included her speaking about marriage, and might I add, she spoke exactly as any 23-year old would have. She said,  “I still don’t understand why people have to get married. If you want to have a person in your life, why do you have to sign marriage papers, why can’t it just be a partnership?” of course, her mother disagreed.

“My mum is like,’ Don’t you dare say anything like that! You have to get married; marriage is beautiful.’”

A  cleric based in Peshawar asked Malala’s father to clarify his daughter’s comments about marriage. He tweeted:
“A news report has been making the rounds on social media since yesterday that your daughter Malala Yousafzai has categorically rejected the institution of marriage and said that ‘partnership’ is better than getting married,” Mufti Shahabuddin Popalzai, the imam and khateeb of Peshawar’s Qasim Ali Khan Masjid, said in a tweet tagging Ziauddin Yousafzai. “We are all deeply disturbed by this statement. Please explain,” he added.

Ziauddin replied to Popalzai’s tweet. He said, Malala’s interview was twisted, and several publications quoted her comments out of context.

“Respected Mufti Popalzai Sahib, there is no truth in it. The media and social media have taken an excerpt of her interview out of context and shared it with their own interpretations. And that’s it,” Ziauddin replied on Twitter.

You are a brave man. Let’s ignore the trolls. Much love and respect ✊

Mathira Thinks Malala Being a Role Model for Muslim Women Should Advocate Nikkah &amp; Not a Partnership. Read the full story here:

Malala has been trending on Twitter since last night after her interview with British Vogue came out. In the interview, Malala explains how a 23-year old is currently living with her parents and struggling with the notion of marriage while her friends are finding partners.