Will The Perspective of Weak/Evil Female Characters Ever Change in the Pakistani Entertainment Industry? 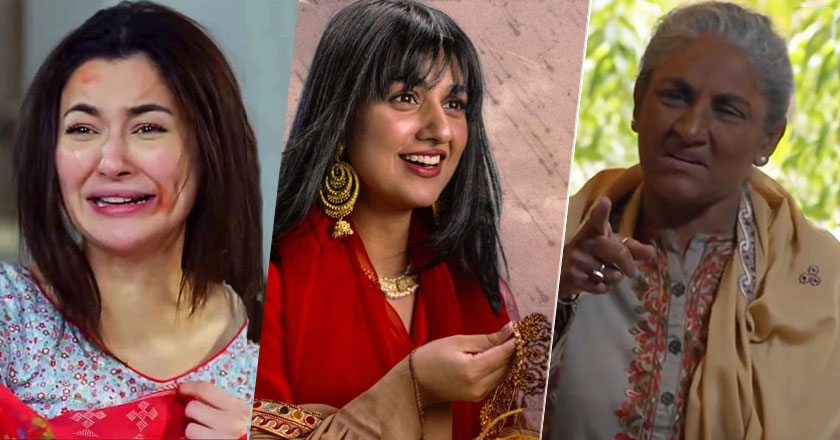 There once was a time when Pakistani dramas took over the hearts of people with their out-of-the-box scripts, concepts, talent, and much more. Praises were sung for the storylines, even across the border.

However, the dramas and scripts being written today are making us question what kind of stories and characters are we showing, and what influence is it leaving behind.

The hard truth is that there is an increase in demand for misogynist, bad boy, law-breaking, murdering male characters and sad, alone, victim-blamed, dependant, gold-digging female characters

Mother-in-laws are bossy, and abusive, and will do just about anything to break their son’s marriage apart, sister-in-laws will join this pact, whereas the damsel in distress will remain voiceless and powerless until the last episode.

Sounds familiar? We thought so too. Instead of showing how mature, stable, independent, and caring these female characters are and how they’ve beautifully managed to maintain the work-life balance, they are labelled as greedy, materialistic or even too career-oriented and ambitious women who don’t give two cents about their families.

This perception of women is not only dangerous to feed into young minds, but is also largely incorrect.

Here are a few examples of what kind ‘role models’ Pakistanis have nowadays:

While the duo, Hania Amir and Farhan Saeed, were loved by the audience, can we step back and focus on the bigger issue here? Throughout the entire drama serial, Hania Amir aka Hala has been shedding tears like her eyes are Niagra Falls. For some odd reason, it is a common perception that South Asian daughters-in-law are abused and tortured by their mother-in-law, and have little to no say in the household.

Hala literally plays the bechari -bebass bahu from the beginning right down to the end! She was even tortured by her aunt in her childhood, and had a daadi who swooped in like Wonder Woman to save her now and then, but died (as always) leaving Hala all alone. Hala eventually starts to confide in hubby Hamza, but of course, that would mess up the plans her dear MIL have for them, thus starting the lies, deceptions, misunderstandings, and whatnot.

Really? What about those girls who have raised their voices? Those women who have balanced their work and career, who stand up for themselves? Why are women always shown to be weak and easily bullied?

Rabi (Neelam Munir) from Pyar Deewangi Hai is another example of a woman who has a husband who loves her unconditionally and yet, the sneaky mother-in-law comes out of nowhere like a pesky cockroach and always manages to make her the bad guy (or girl in this case) and guess what? Like always, she is also Rabi’s aunt – taadaa!

How can we forget the wicked witch who is the root cause of all the problems in Hala’s life, right? In Pakistan, when a girl is right about to get hitched, she is given tips, ones in which her friends and family members warn her about a controlling, wicked, evil, a woman who will make her life miserable – the MIL. While in our own lives and in the lives of many others we know, the MILs are sweet, supportive, caring, and let their daughter-in-law’s life on their own terms, but not Shahjahan!

This lady here who has dominated on Pakistani television screens has shown countless MILs and ones to be, how to be evil, how to create rifts between sons and their wives, how to manipulate innocent mama’s boys into falling into deep traps when they will always ‘be safe’. From verbal abuse to physical, this saas of the year has done it all with Hala – making this MIL a sight we’d never want to see.

How can we forget about Gul-e-Rana as Naseem in Pyar Deewangi Hai who not only plays a dark-skinned character (which received ample backlash from the audience for perpetuating the dark-skin stereotype) but will also do just about anything to break off her son’s marriage – what a  hobby these MILs have found, way to go story-writers!

Iqra Aziz felt like a professional extortionist in the drama serial, which became a snooze fest a few episodes in because she had the same pattern of behaviour. Get married to an easy ‘bakra‘ that loves you and will serve you anything and everything on a silver platter while you blow off his hard-earned money, spend it on yourself or your boy-toy, and you know the rest.

Whereas Sara Khan’s character also shows us the same ‘gissi pitti’ story of how a girl born into a middle-class family pretends to be the Queen and a fake to keep up an image and leaves her father penny-less.

Shazma from Woh Pagal Si. Played by Zubab Rana is not too far away from these characters herself. Not only does she openly cheat on her husband but she also takes his wealth and wants easy money over hard-earned halal money.

How is this fair to all the middle-class girls who work day and night and some more than 1 job to feed their families and provide the basic necessities for them? Ever thought of writing something for them instead?

What justifies a womaniser having a few side chics by his side? The phrase ‘Men will be men’ which is ‘Woh larka hai’ – the three words that give permission from cheating on their wives, to even murdering a random person for their girl! How cute! Just the type of men we need in our lives who will make every living second a nightmare trapping us in jail sounds like a dream! But, what about the chics who know that the man-child is taken, and still pursue him like he is the pot of gold we’ve heard about waiting for us on the other side of the rainbow?

Shamsher from Kaisi Teri Khudgarzi, Mateen from Pyar Deewangi Hai or Zaheen from Woh Pagal Si are hand-picked examples of women who are waiting for the minute their men leave their wives so that they can steal everything, and mind you these girls will go to any extent to keep the men on a leash.

Shelter homes and pet stores are filled with pups and dogs for adoption FYI.

Have anything to add? Share your thoughts with us in the comments below.