Sunday, June 26 2022
Top Posts
4 Antioxidants That Your Skin Needs if you...
5 Ways to Prevent Ovarian Cysts in Women
3 Lassi Recipes to Beat the Heat in...
3 DIY Hotpot Recipes You Can Make at...
5 Tips to Keep Your Hair Sweat-Free During...
Fawad Khan to Make Debut in Ms Marvel...
“Women Can Accomplish Anything They Set Their Mind...
TikTok Releases First Album of Viral Hits
Mehwish Hayat Makes Her Debut as a Djinn...
‘Girls are No Less Than Boys’ Says Pakistani...
CultureTrailblazer 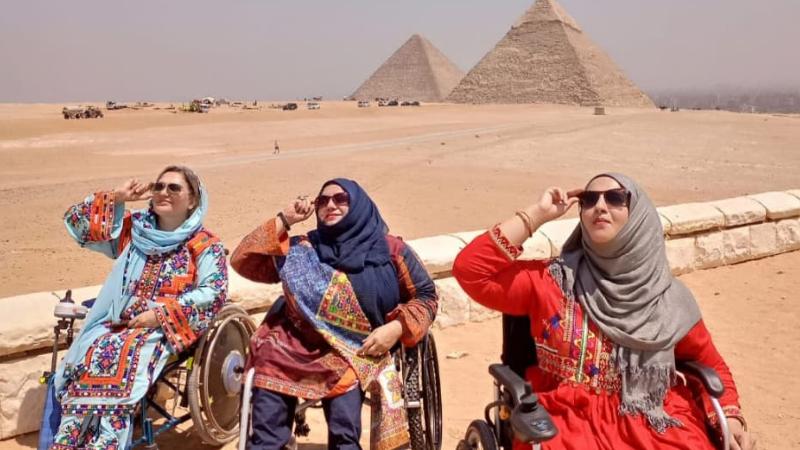 An activist and entrepreneur, Tanzila Khan from Punjab, is on a mission to help improve women’s health. Zargoona Wadood from Quetta, whose work focuses on women with disabilities, and Afshan Afridi from Khyber Pakhtunkhwa, working in the development sector since 2013, connected and decided to travel together.

Why did Khan, Wadood, and Afridi choose Egypt to travel solo?

Khan, Wadood, and Afridi chose Egypt as their destination because of its rich history. All three of them are fascinated by Egypt due to its incredible history and, of course, the culture. Additionally, the halal food was a plus point for them. Moreover, the three admire Prophet Musa greatly, and so this added up to the list of things that persuaded them to choose Egypt to travel to.

Remembering her joyous trip, Khan shared some fun facts on her Instagram page from her trip to Egypt.

She wrote that all three of them fought thrice while in Egypt. “We all fought thrice during this trip and had arguments only to break into laughters in minutes feeling like reality TV contestants”. The second was breaking down and sobbing at different intervals.

She wrote, ” Each one of us broke down at one point at different moments. Sat sobbing like schoolgirls at beautiful locations. It has taken us so long to be this Indpendent on our own terms. One common ground was recalling how our fathers have been our pillars of support and without them we cant be anywhere. Salute to all Babas of the world.”

She also mentioned how challenging it was for them to travel solo, but they made it happen by hook or crook.

The language barrier was a significant problem for them. However, they managed to speak to their drivers and explain how they wish to be handled. “We had to be really loud and vocal on how we want to be handled and it works no matter what country it is.”

On not having an accessible washroom in a restaurant, Afshan fell into one cubicle. However, she managed to get on her chair and move on as nothing had happened. Another challenge was to pay double for accessible rooms. They also had to book two cars instead of one since their wheelchairs went into another. Khan wrote, “We spent DOUBLE of what we had intended. Let’s call it disability travel tax.”

Regardless, the three will soon travel again and hopefully share unique snippets with us on social media.

Middle East’s largest country, Saudi Arabia, had opened up military recruitment to women in February. On Wednesday, after 14 weeks of training, the first female Saudi soldiers graduated from the Armed Forces Women’s Cadre Training Center. At this auspicious event, the head of the Armed Forces Education and Training Authority, Maj. Gen. Adel Al-Balawi gave a speech.