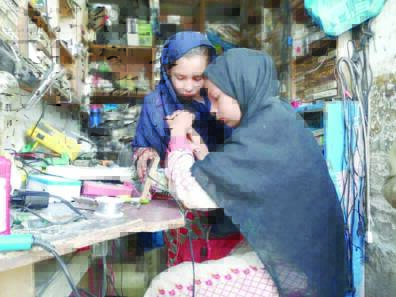 Women have proved their mettle in every field, and we know there is nothing women can’t do that men can; infact, they are born multi taskers, managing home and work like pros. Be it any profession, women can work equally well as men and excel in any career. What’s even great to see is parents, specially fathers becoming a source of constant support for their daughters, uplifting their talents and being proud of their achievements.

One such proud father is Naseeb Jamal who hails from Karachi and owns an electrical repair shop in the city’s Qasba colony. This man is teaching his daughters how to repair electrical appliances and work as electricians with him at his shop. Female electricians in Pakistan. How amazing is that? An uncommon profession for women in Pakistan, Naseeb Jamal believes it is imperative to trust their daughters and make them learn these useful life skills in order to make girls more independent and empowered. Making them acquire good education goes hand in hand with useful life skills.

It has been almost 16 years that my daughters have been working with me. I have eight daughters and a son. four of my daughters are married, while two stay at home and the other two come to work with me, says Naseeb Jamal in the video.

In a viral video Naseeb revealed how he has eight daughters. While two of the elder ones are now married, they were 6 and 4 years old when he first started brining them to the shop with to teach them electrical repair work; he shared how he faced backlash from his own family and neighbors, who judged him for taking his own daughters to an electrical repairs shop.

He has now trained 6 out of his daughters in electrical engineering work and dreams of establishing a training center where he can teach this skill to girls for free.

But he saw no harm in this! Infact he encouraged all parents of daughters to encourage them to study and make them lawyers, doctors, electrical engineers- just about anything, if it’s a respectable profession. He wants parents to realise that there is no difference between a son and daughters.

He wants parents to make daughters their source of pride.

As time passed, his neighbours and family members who were once against his decision, started respecting him. Even though there is meager earning, he has a respectable profession and wants to impart his skills onto his daughters.

He added that he is determined to get his daughters educated and said, “It is another dream they study engineering.”

More power to this father. We wish every father in Pakistan starts following in his footsteps!