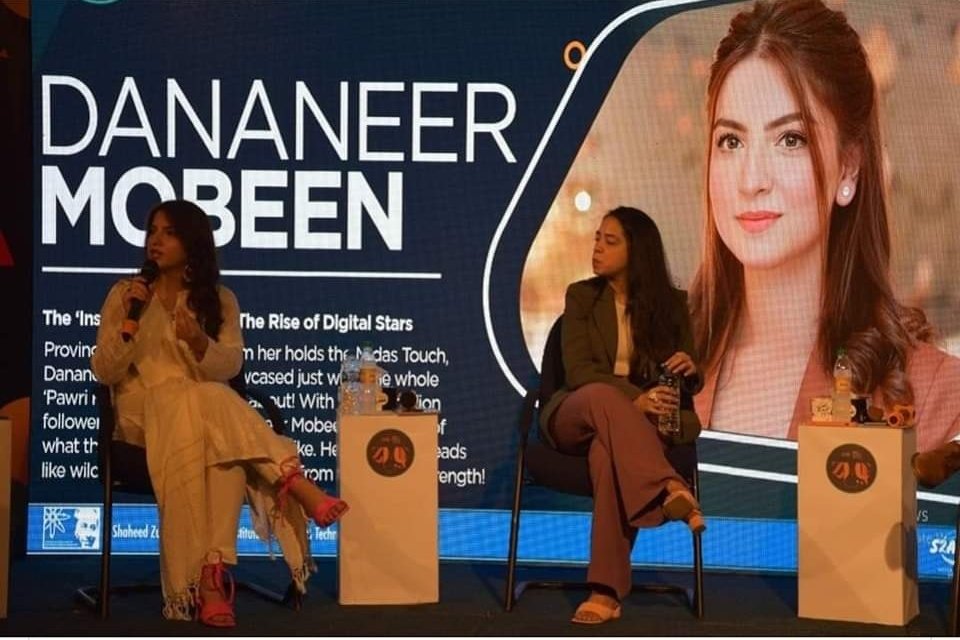 One of Karachi’s credible universities, Shaheed Zulfikar Ali Bhutto Institute of Science and Technology (SZABIST ), has been criticized online for inviting Dananeer Mobeen, aka Pawri girl, as a guest speaker.

Dananeer was invited to a talk arranged for media students, “The Rise of Digital Stars,” where digital media creators were present as guest speakers. After the discussion, students and internet users took it to social media to express their disappointment in selecting speakers for the talk. They said the decision reflects the declining standards of educational institutes in Pakistan.

In 2021, life drastically changed for Mobeen after her “Pawri Horahi Hay” clip went viral.  She became an overnight social media influencer. We know how numbers on social media matter as they collectively enhance the chances of increasing reach in today’s world.

While Pawri girl’s meme was trending far and wide on social media with a gazillion of shares and likes, it allowed her to quickly earn a massive following on Instagram, which made her the most wanted influencer.

The pawri clip was a clip she made randomly when traveling to Nathia Gali with a group of friends. The video remained on her phone for 10 days after she recorded it and then was uploaded at her friends’ request on her Instagram. Currently, she has 2.1 million followers on Instagram.

Why are People on the Internet Criticising the Choice of Speaker for the session held at the university?

A digital influencer may take 5-8 years to reach the following Dananeer has garnered within 2 years. People’s disappointment may be linked to Mobeen’s overnight success over someone who has been through the grind, and hustled to uplift their career to gain followers, recognition, and improve their craft.

Dananeer got invited by SZABIST as a motivation speaker? This represents the declining standards of not only our society but the educational institutions as well.

A user wrote, “we have multiple successful people this generation to be invited to educational institutes.”  He added, “I wonder what she talked about?”

We have multiple successful people from this generation to be invited in educational institutes. I wonder what she talked about? As speaker 😂. Yes yes i m some majeed from some place who didn't like this 😂😂😂 but Deep down we all know this is stupid by Szabist. https://t.co/6BfRH8dSYg

this represents why the whole mantra surrounding motivational speakers is a scam and should be completely abandoned https://t.co/sSzZpKGhzv

Absolutely no hate to the person here. But towards the declining standards of not only the society but reputed educational institutions too. A week ago, a young Urdu poet committed suicide due to lack of recognition. He had talent and genuine content. But no one knows his name. https://t.co/994WQhgnTs pic.twitter.com/SFxsev6FEc

I had to sit thru a session with then Chairman Pakistan Bait ul Maal during my orientation cermony at SZABIST in 2008. Aisa lag raha tha political rally mei aa geya houn ghalti se 😂😂 https://t.co/linRvzo4oq

Many People on the Internet also Lent Their Support to Dananeer

While there were many to criticize Dananeer and the declining standards of the university, many also took Dananeer’s side. They explained how she was a perfect choice, someone whose story is a success story.

Dananeer was invited by SZABIST not as a motivational speaker but as a speaker for a panel called “The rise of digital stars” and she is perfectly fit for that. Media students needed this panel for their future plans in media. Enough with useless criticism to degrade others https://t.co/8FQj1ZQp2a

She wasn't invited as a motivational speaker she was invited for speaking on "Instant Revolution-The Rise of Digital Stars" for which she is perfectly fine, I guess knowing things before tweeting would make whole lot of sense. https://t.co/37RpSiPVsK

Dananeer has achieved fame money appeal-a general likability. None of which is taught in educational institutions. People from the digital platform can and do relate to her. not every mot speaker needs to have phds and bald heads bro https://t.co/rSmvoajRsO

Ummm what has that girl done for you to be so against her? Having the ability to turn a viral moment into a career requires brains and talent, others are forgotten after 15 minutes of fame. https://t.co/Dn9l2wlgFo

Who said you need a degree to be a motivational speaker. She is a blogger who worked hard and finally got the attention she wanted. She is a success story now running her own business and emerging as an actor. https://t.co/om3e6RqQzt

Most memes tend to die soon enough after trending for a bit. However, Dananeer Mobeen’s Pawri Girl video is still exploding on social media not just in Pakistan but also in India. Dananeer revealed on Nida Yasir’s Morning show yesterday that she loves creating content and is always doing that unconsciously on the go. The pawri clip was another video that she made randomly when she was traveling to Nathia Gali with a group of friends. In the clip, she had said…

What Is Period Acne & How To Get Rid Of It