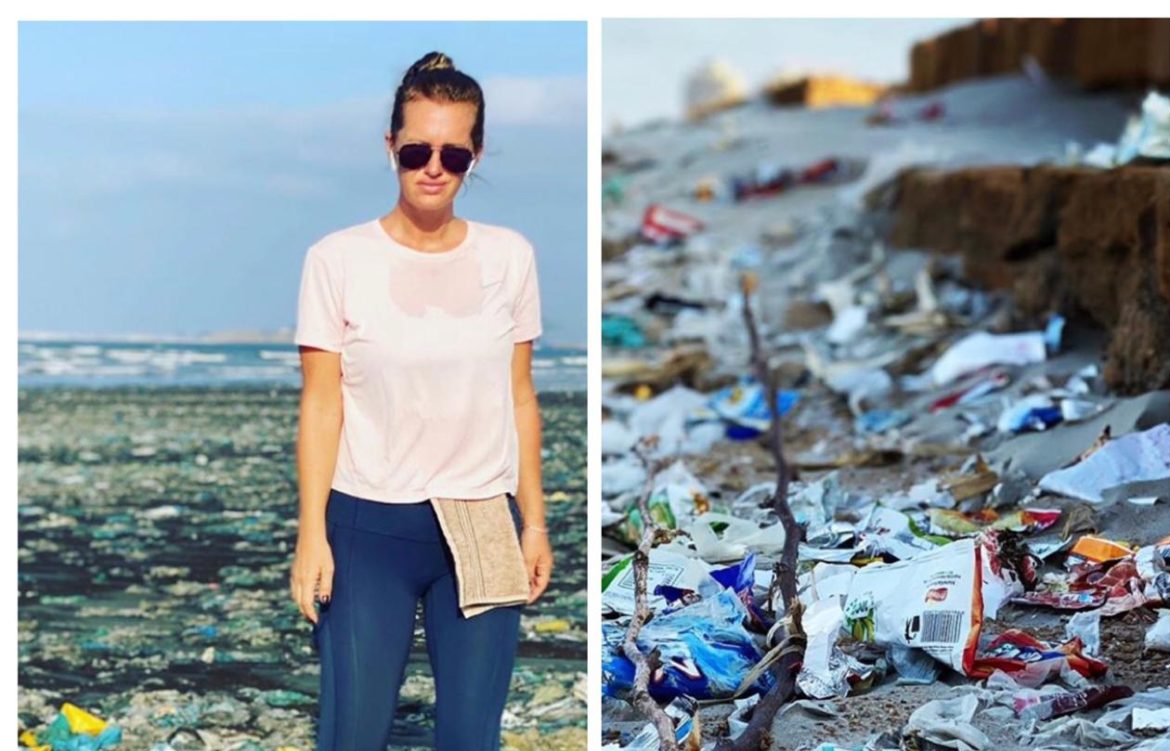 On Monday, Shaniera Akram took to her Instagram posting a picture of herself standing around the waste and dump on the clifton beach – with quite an alarming caption.

She stresses on the need to stop littering and being ignorant of the reality that our city is producing trash without an effective means of disposal. She urged everyone to start working together in order to keep the city hygienic and contributing to making it a clean space to live in.

She’s pointed out the fact that in order to do so there have to be trash bins so that people can dispose their garbage. Below in her instagram post she has appealed to the Cantonment Board Clifton (CBC) to look in to this.

Yo @cantonmentboardclifton we are going to need a few bins over here. Please don’t make me beg 🙏 it’s one thing to ask people to pick up their rubbish but another not to give them anything to help them dispose of it properly. Let’s not give them a reason to drop it #CoastlineLittered #CantIgnoreIt #BinIt #StraightInToTheSea #WhatAreDoYouNeedHelpWith #LetsDoItTogether #CleanKarachi #TogetherWeCanMakeADifference @dhakarachiofficial @dhakarachiofficial

She also posted a picture of a poor little girl walking around barefoot in the trash and pointed to the seriousness of the situation in terms of safety and hygiene.

Wasim Akram also took to his instagram page and posted a video showing the current condition of Clifton beach. He says not only does the place need to be cleaned up, but the people who litter are the culprits too. To have a cleaner and healthier environment , it’s the citizens responsibility to play the major role and unless we don’t adopt clean habits, our city will never be free from diseases, global warming and the negative impact caused by garbage and plastic disposal into the sea.  See his video below.

SHE BROUGHT THIS MATTER TO THE NOTICE OF CBC LAST YEAR

Shaniera Akram’s disappointment on the state of Clifton Beach led her to beg CBC to look into this matter last year as well. Here are a few images and videos she posted last year in 2019  on her Instagram.

There is no bigger heartbreak than the love one has for our city and our beach. Karachi and all who live here on our land and in our waters, are literally choking to death. This has been so hard for me to post but if we really want to clean up our city then now is the time because Karachi really needs our help. YES we need better garbage disposal, YES we need to enforce recycling systems but we also need to start playing our role. Did you know a plastic bag takes between 1-10 000 years or more to decompose? We don’t need more bandaids of beach clean ups we need to get to the root of the problem! This is our home and we need to look after it. Karachi is imposing a ban on plastic bags from Oct 1st but it’s up to us to enforce it. Stop the use of plastic bags and polystyrene containers in your home and office NOW. Everyone must play a part so that we can all have a better future. If just half of us stop the use of non recyclable plastics that will make an incredible difference already . Make the change so that our city has a chance. Ask for paper and say no to plastic ! #LetsCleanKarachiForGood #SayNoToPlastic #PaperIsSafer #OurCityIsChoking #SayNoToRestaurantsWithPolystyrene #UseMaterialShoppingBags #AskForPaperBags #KarachiNeedsOurHelp

On behalf of all the citizens in Karachi, I Shaniera Akram declare Clifton beach in the state of emergency. There is Kilometres of medical waste, including open syringes, viles of blood, broken glass medical containers, that has come in from the ocean spread out over kilometres across the beach. Our beach is biohazard zone and needs to be shut down immediately. I am so sorry to the people including myself who use and love our beach but this is beyond safe. #CliftonBeachStateOfEmergency #ImmediateShutDown #Extremelydangerous

“Medical waste, syringes, vials of blood that has come in from the ocean has spread across Clifton beach for kilometres”.

The Sindh police cordoned off the area soon after her tweet and not just that, Shaniera received love and support from all the citizens of Karachi whereas she thought that the people will hate her for closing down the beach. Akram’s efforts were instead lauded by the citizens and people were grateful for her to come up with this initiative.

Not on my watch!!! Thank you to the tremendous support I have received from everyone your messages of love, support and respect mean so much to me. To be honest I was so scared that everyone was going to hate me for wanting our beach closed, but I think I did what anyone would do when faced with such a moral and serious situation, I called for help, and you all came! I love my city and my country and I will always do what ever I can to protect the lives of the people living here. But remember it wasn’t just me, Everyone played a massive role, voicing their opinions, retweeting and just caring in general sent the alarm bells ringing which got the attention of the right people. I should be thanking everyone one of you. We are facing many problems in our city but if we all stand united we can overcome anything #WeAreKarachi #WeDeserveBetter #TimeIsNow #SaveOurCity #WeArePakistan #United #MostLoveableCityInTheWorld because I have people like you @wasimakramliveofficial who always believes in me

Soon after her tweet, CBC took action and isolated the clifton beach. Akram shared images of the Clifton beach, praising CBC’s hard work. “Thank you CBC for fulfilling your promise by not only protecting your staff but also the people of Karachi,” she wrote.

Not once did they complain nor played the blame game. Unidentified Medical waste washed up on their beach & they got to work, not only working around the clock cleaning up dangerous waste but also raised the bar & showed Karachi the way cleaners should be protectively uniformed https://t.co/v4h2iJM082

From this to this! Protective gloves, closed footwear, sunhats, reflective jackets & identification, industrial medical waste bins & biohazard waste handling equipment. Thank you CBC for fulfilling your promise by not only protecting your staff but also the people of Karachi 👏🏼💪 pic.twitter.com/2IPlFZgFls

She also posted on her Instagram – explaining that if you’re determined towards achieving a certain goal – nothing can stand in your way.

Clifton beach this morning showed me that we can accomplish anything if we work together. I am marching today in Karachi because i can. Everyone is a part of this world and everyone can make a difference, no matter how small or big. If we ignore a problem it won’t just go away, it will just get worse, Climate strike is about being aware of the environment you live in, and making differences for a positive impact. Join me and march with the world, for the world! #ClimateStrike #WeCanAllMakeADifference #ClimateChange #HealTheWorld #DoYourBit #MarchForChange

Thanks to ⁦‪@iamShaniera‬⁩ for initiating this needful campaign and to all government officials and massive thank you to workers who come there every morning to make it look the way it is now . #cliftonbeach #congratskarachi

BACK TO THE SAME MESS AGAIN

However, this year we’re all right back to where we began. With piles of garbage on the same Karachi beach. Shaniera is determined yet again and appeals CBC to shed some light on this disastrous city situation.