Much like the realme 9 Pro+’s Light Shift Design, Sajal debuts a bold and different look for realme 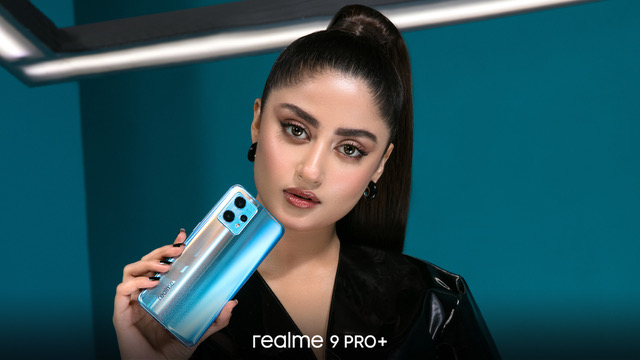 A stylish and performance-oriented smartphone like the realme 9 Pro+ needs a brand ambassador like the illustrious Sajal Aly. The actress and model have a history of successful TV and film projects locally as well as in the international sphere. She made her acting debut in the 2009 sit-com Nadaaniyan and went on to have many breakthrough roles in local telefilms and TV serials. In 2016, she made her silver screen debut with Zindagi Kitni Haseen Hai before landing a lead role across the border in the Bollywood film Mom.

She is all set to make her Hollywood debut in Shekhar Kapur’s What’s Love Got to do with it? Partnering with realme, Sajal has made an aesthetic shift. She has taken on a young, fresh, trendy avatar showing she can pull off any look much like the realme 9 Pro+ with its aesthetic Light Shift Design. This innovative design is available in the realme 9 Pro+’s Sunrise Blue variant and will be the first color-shifting smartphone in its price segment. 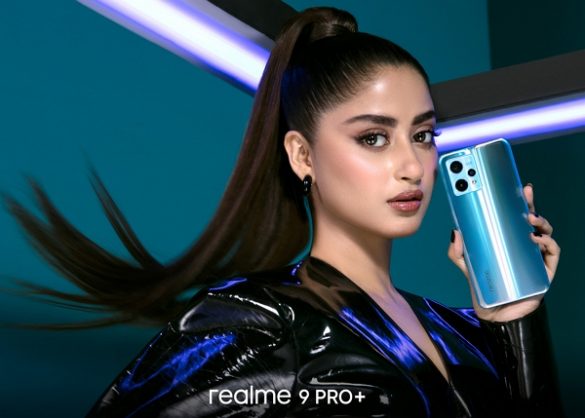 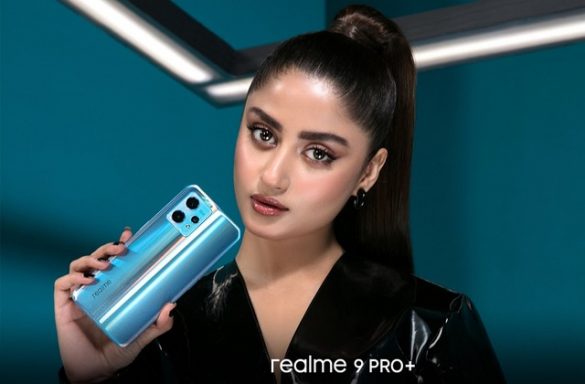 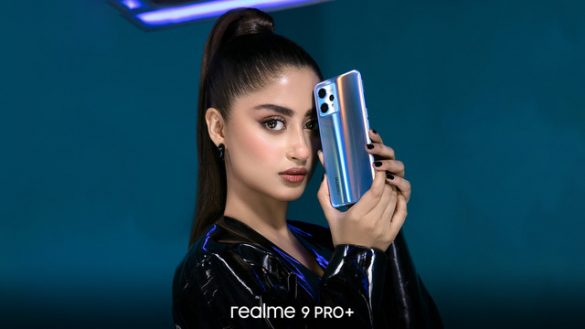 Inspired by photo-chromism and organic photochromic materials, the rear panel of the smartphone changes color from Sunrise Blue to a sparkling red color under sunlight or UV light. Once removed from the source of light, the back panel reverts back to its original color in a time period of between 2-5 minutes. realme fans from 9 different time zones around the world were asked to contribute images of the rising sun, which allowed designers to pick out the most classic color changes that occur during sunrise. T

his led to the selection of a cool blue and a harsher red to accurately reflect the colors of the sky. It took over 200 attempts with scientific testing to overcome the challenges standing in the way of making this design a reality. This included inquiry into how to ‘alter’ the molecular structure to make the material change colors and revert back quickly.

In order to finally achieve this effect, realme first created the pioneering dual-layer photochromic process. After some creative thinking, an organic composite layer was layered on top which not only guarantees the desired effect but also increases the color rendering rate by 40%. This three layer process creates a shiny, color-rich, rear panel with a vibrant vertical beam that shines from any angle you view it from.

With such a fun and dynamic design concept on the outside one might be tempted to think there isn’t much substance on the inside but the realme 9 Pro+ will surely prove you wrong. Boasting premium features such as a 50MP AI Triple Camera with Sony IMX766 OIS Sensor, MediaTek Dimensity 920 5G chipset, 60W SuperDart Charge, and a colossal 4500mAh battery, the realme 9 Pro+ is coming to give tough competition to the high-end smartphones in the market. So Dare to Leap with realme and Sajal Aly and gear up for the upcoming release of the realme 9 Pro+ which will be available with your local smartphone vendors very soon.

Reporter Claims Ahad Raza Mir Cheated on Sajal Aly with Another Actress from the Industry. Read the full story here:

A reporter has claimed that Ahad Raza Mir cheated on his wife, Sajal Aly with another actress from the industry. Pakistani entertainment industry’s popular couple, Sajal Aly and Ahad Raza Mir have parted ways legally. The news was confirmed last week. It has broken the hearts of thousands of fans across the globe. Many are speculating on what caused the actors to separate and are coming up with various reasons.