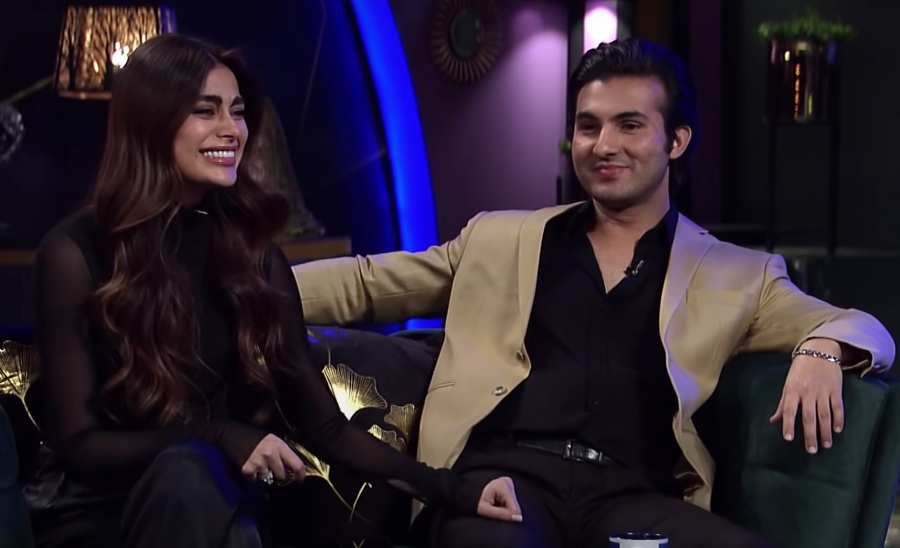 Shahroz Sabzwari and Sadaf Kanwal are sure one popular couple. The two have displayed love and affection for each other on-screen multiple times. This time Sadaf displayed jealousy out of love after hosts asked her on a show of who she won’t let her husband work onscreen with. She was given three options: Ramsha Khan, Alizeh Shah, or Hiba Bukhari.

At first, Sadaf was confused about who Hiba Bukhari was but later chose Alizeh Shah. She quickly chose her and patted Sabzwari; they both giggled in their seats and moved on to another question.

Maybe something about Shah didn’t settle with Sadaf, or maybe it was an inside joke, but who knows what happens on the inside. Shahroz and Alizeh have appeared in a show before called Love Story, a telefilm for Aaj Entertainment.

Swipe right to watch the clip:

We don’t really know the story yet, but all in all, the couple gets stuck between many controversies. In the same show, the couple also unveiled how they met for the first time.

Many were interested to know how they had met. Fans and media greatly questioned the association of the two stars as rumours were going around in circles that Shahroz was dating Sadaf. At the same time, he was still married to Syra, which he had initially denied in a video he uploaded on social media.

Sabzwari had previously released short clips of him clarifying to the public that the reason behind the divorce with former wife Syra Yousuf was not infidelity.

In one of the clips, he said he and Syra were separated when he met the model. He denied accusations of cheating on his wife with the model.  Syra stated on her Instagram that it was due to “irreconcilable differences”.