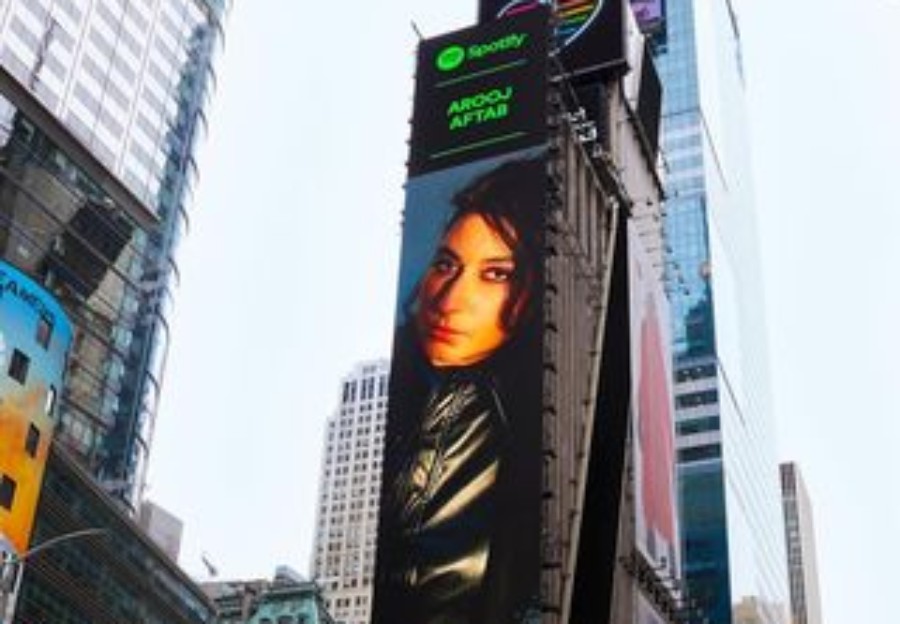 Pakistani musician, Arooj Aftab, also nominated for a Grammy award, has been featured on a billboard in New York City’s Time Square.

Aftab is EQUAL Pakistan Ambassador of the Month. Spotify Pakistan updated their official Instagram with an image of Arooj’s face up on a billboard in Times Square.

The caption says, “This is a 𝙨𝙞𝙜𝙣 – @AroojAftabMusic has entered New York Times Square. Congratulations to #EQUALPakistan’s artist of the month.”

“I am extremely excited to be the first Ambassador of EQUAL Pakistan because this kind of well-structured program will help uplift women in the audio industry of Pakistan,” said Arooj Aftab.

Aftab has earlier spoken about changing stereotypical social norms in the music industry, “If I could do something to promote women artists of Pakistan, I would give them all the gigs. All the women working in the music industry are super talented, so the industry should give them a chance to prove themselves and learn from those opportunities to get better at what they are already doing. We hire men by just looking at the potential that they have, but in the case of women, we are constantly waiting for them to prove themselves. I think this mindset needs to change.”

Aftab herself was present at the New York Time Square. She posed in front of the billboard and posted a picture on Instagram giving credit to all those who made it possible.

Ali Sethi and Shae Gill’s Pasoori from Coke Studio’s season 14 has made it to the top 3 on Spotify Global viral 50 lists. Sethi announced the news on Instagram, he said Zulfiqar Khan told him it would top the charts last year, but he didn’t believe it at the time. He wrote, “One year ago when @zulfiqarjkhan heard this tune I’d sent him on a voice note, he told me with a tremendous calm that it will enter the global charts. I laughed, drank my coffee,

Contraceptive Pill for Men Found to be 99% Effective in Preventing Pregnancy: Important Development