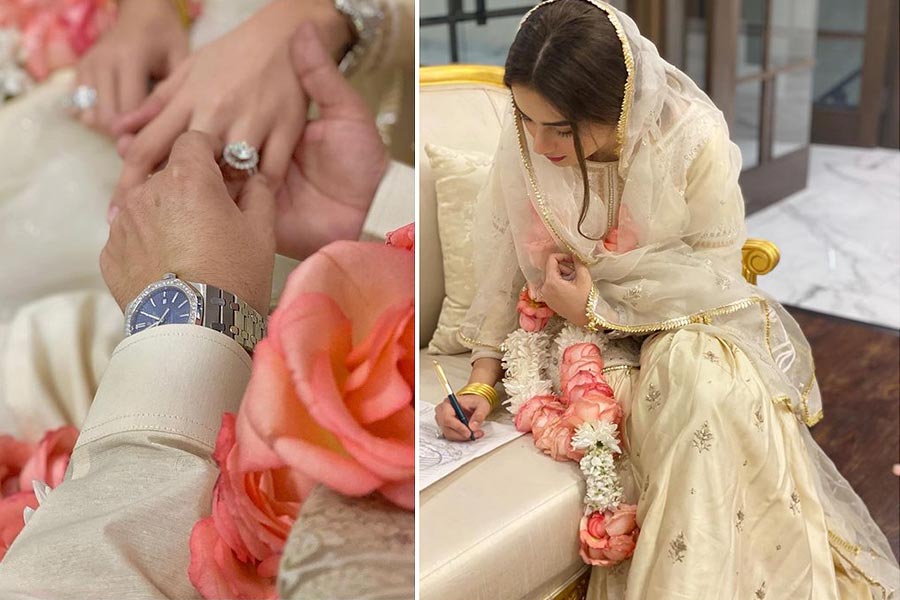 Pakistani model Alyzeh Gabol has officially tied the knot in Dubai. The famed model announced the news on her Instagram by uploading pictures from her nikkah.  In pictures, we could only see Gabol signing her nikkah papers in an ivory wedding trousseau. The groom and the bride exchange their engagement rings; however, the man of her dreams was kept a secret intentionally. As much as we’d like to know who the famous model tied the knot with, we think its best to keep some things in the dark.

Isn’t that ring beautiful? Wishes poured in from the fraternity as soon as the model updated social media with the news. Aima Baig, Sadaf Kanwal, Faraz Manan, Mushk Kaleem, and others sent their best wishes.

This is Alyzeh Gabol’s second marriage. The model was previously married to Osama. Both of them have a daughter together and are lauded for maintaining a healthy relationship for their daughter even after their separation. The couple was spotted celebrating their daughter’s birthday peacefully a little time ago.

A perfect example of how things should be. Failed relationships shouldn’t be forced on anyone. Instead, we should make space for the newer ones and open arms to the happiness we think we deserve. We wish the couple all the happiness in the world on their special day! Have something to add? Let us know in the comment section below.

For more news and updates, stay tuned to Wo 360.