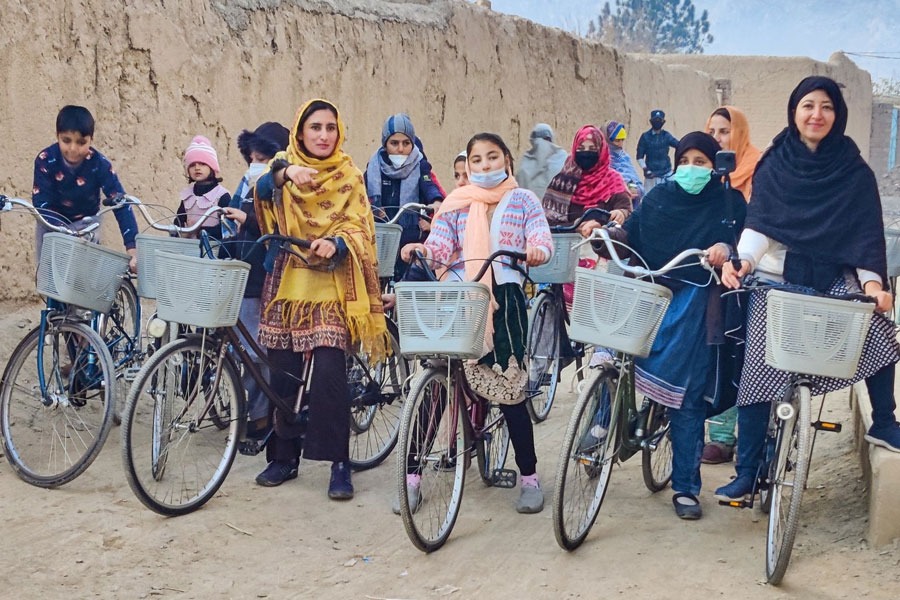 Pakistani adventure athlete, Samar Khan, recently made headlines when she became the first-ever person and only female athlete to summit and snowboard on a virgin peak (5,610 meters).

In honor of her achievement, the peak has been named ‘Ghar-e-Samar’. Moreover, Khan has opened doors for young girls who dream to get into adventure sports including snowboarding, skiing, sleighing, and many more.

Once again, Samar Khan has done something that once was thought as ‘impossible’, she has successfully conducted the first-ever cycling camp in the history of Landikotal-Khyber.

Khan’s camp gave not 2 nor 3 but 15 girls the joy of cycling and the ability to enjoy this one-of-a-kind sport and experience.
Khan took to Twitter to express her feelings about this iconic achievement she has engraved in history. She wrote:

Proudly conducted a cycling camp first time ever in the history of Landikotal-Khyber. More than 15 girls experienced the joy of cycling which is now shaking the imaan of many misogynists & ignorant calling it ‘be-hyaayi’. But we stay strong & determined

Proudly conducted a cycling camp first time ever in the history of Landikotal-Khyber. More than 15 girls experienced the joy of cycling which is now shaking the imaan of many misogynists & ignorants calling it 'be-hyaayi'.
But we stay strong & determined. 💪#SamarCamp 🚴🏂 pic.twitter.com/DNH49YEFsi

The group then proceeded with a rally organized by a Landi-Kotal-based social activist and journalist Jamima Afridi.
During the rally, international cyclist Samar Khan said that the environment in the tribal areas is different from what was perceived. The people are now ready to let their girls participate in such activities.

Afridi also shared that the girls had received permission from their homes to take part in the rally, and some of them came along with their mothers.

However, despite parental permission and complete consent, some right-wing groups have considered the activity a source of obscenity.

So much so that Afridi shared that she has received death threats and that an organized hate camp has been arranged to protest against her.

However, she says she is unmoved by these threats and will continue to arrange such events for the tribal girls so that they can eventually compete in national and international competitions and eventually represent Pakistan.

We’d like to take this opportunity to say ‘more power to you Samar Khan and Jamima Afridi’ may you continue to pay the way for these girls.