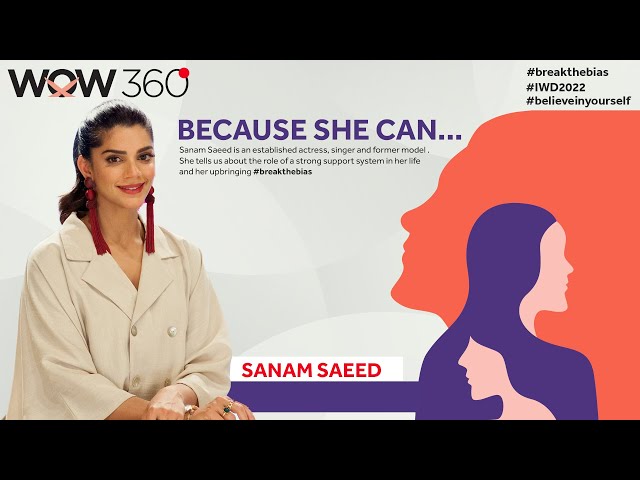 Pakistani actress, Sanam Saeed reveals to Wow 360 how she chose to #BreakTheBias in the entertainment industry.

Out Editor in Chief, Farhat Kapadia Mehboob spoke to Sanam Saeed during an exclusive interview where she revealed how she chose to #BreakTheBias in her field and the role of a strong support system in her life, especially her mother who have her confidence and her nurturing upbringing.

Sanam said, “Fortunately, I’m among some of the fortunate women who have had a very smooth journey in this field/ industry but I would say that was because of the very strong background that I had; a strong support system, and a strong background where the mother plays a big role in grooming her daughter and equipping her with correct tools to face life, especially in the industry like this. These tools are self assurity, self-confidence; therefore, you’re not insecure. ”

“When you are insecure you kind of take a lot of wrong turns when you are secure with who you are, where you are, the people you are around, and how to conduct yourself with different people – Also dressing the right way. it all kind of comes from the upbringing that I had that made me confident enough to walk around in any crowd, deal with any kind of person, man, child, or a woman.”

“Being respectful; you give respect, you get respect – so that applies to an animal or a human being. If you are kind and give anyone respect then you get that back but of course, there have been instances where that doesn’t happen that’s why I say I am one among some of the fortunate people. ”

“Also, with anyone that has been through an unfortunate situation being a woman in this field, the saddest part is that when she goes to a) If she doesn’t have anyone to tell that something has happened b) If she has someone and no one does something about it – So actually the biggest weapon in my journey was that if anything ever happened as a child, I’m talking about sexual abuse or misconduct or any kind of misbehavior, I knew I could go to my parents.”

“My parents would draw blood. I knew there would be a fight that somebody would protect me. The immediately gives you the confidence to go on to face something as you know you have got backup support. When you don’t have that, it can be scarring. ”

IWD 2022: Rida, a Mechanical Engineer Talks About How She Chose to #BreakTheBias. Read the full story here:

Rida is working in a predominantly male-dominated field. She tells her inspiring story on how she started her career, the barriers she faced & overcame, and how she chose to #breakthebias. She provided us with insightful information that can help women break barriers in order to retain themselves in their jobs and how also how they can advance their careers, in this profession.

IWD 2022: Rida, a Mechanical Engineer Talks About How She Chose to #BreakTheBias