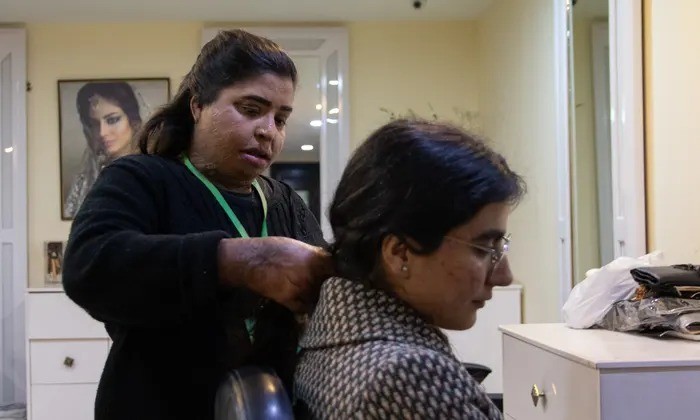 BBC Asia’s report on acid attacks has been shortlisted for Best Report of the Year in Asian Media Awards 2020. The report focuses on the turmoils and road to recovery of Margaret Heera, the acid attack survivor of Depilex Smileagain Foundation, Pakistan created by Musarrat Misbah.

BBC Asia’s news reporter Shabnam Mahmood reported on the acid attack survivor documentary, that has been nominated for Best Report of the Year in Asian Media Awards 2020.

Margrat is putting back her life’s pieces together, that was left in shambles when her husband threw petrol at her and set her on fire. She is working as a beautician thanks to the charity set up by Musarrat Misbah in the name of Depilex Smileagain Foundation, to help women who have suffered acid and burn attacks. The 23-year-old has been able to learn new skills so that she can support herself and her family.

Below is the BBC report shortlisted for the award:

Margaret Heera from Lahore is a victim of a heinous incident of violence. She was ill treated by her husband and in laws for not bringing enough dowry at the time of marriage and was locked in a room one day when she refused to bring money from home. Her husband spread kerosene oil and lit her on fire, leaving her severely burnt in the tragic incident.

She saw the DSF advertisement one day and got registered with the foundation in 2015 and has gone through multiple surgeries since then. She has also completed beauty course and works as hair stylist in Depilex Salon in Lahore.

In addition to providing her son educational assistance, DSF also provide the survivors with legal assistance through networking; through this, the culprit was sentenced to 50 years of imprisonment.

Depilex Smileagain Foundation is committed to providing the acid survivors with medical care along with an equal chance of becoming productive, independent members of the society; their vision is long term.

The Asian Media Awards recognise the strength and depth of the media industry. Established in 2013, the awards aim to highlight the ground breaking work of reporters and producers in highlighting issues affecting race relations and human rights.

The awards reward those who excel in the British Asian and Mainstream media. It also acts as a platform for those working in the industry to network with organisations where they are vastly underrepresented.

Have something to add to this story? Share comments below.