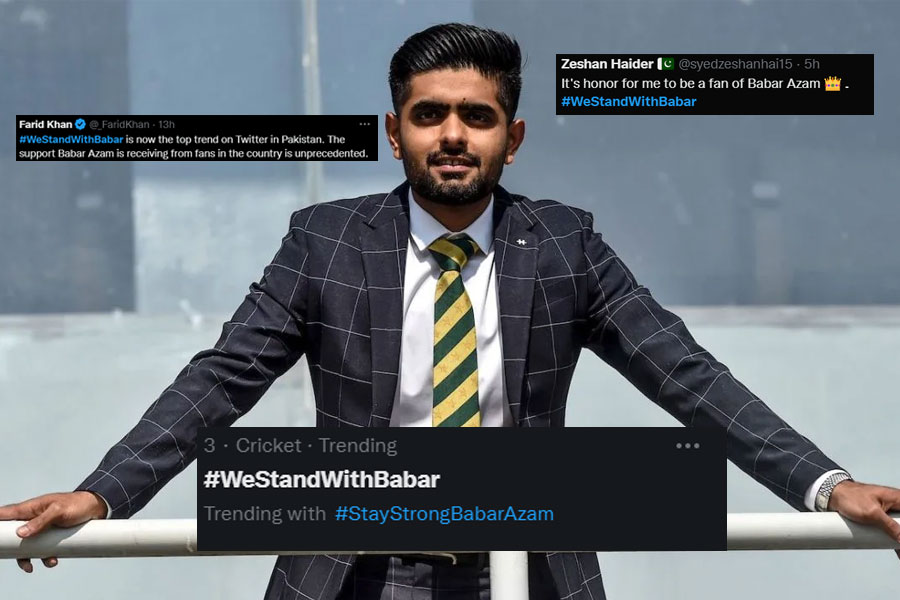 The recent controversy surrounding Pakistani cricketer Babar Azam has had serious repercussions in the cricket world, with allegations being made against the cricketer regarding sexting with a teammate’s girlfriend.

This has caused a great uproar on social media, with fans of Babar Azam expressing their support with the hashtags #westandwithbabar and #staystrongbabarazam.

The allegations have been met with criticism from some, while others have voiced their support for the cricketer, citing his clean record, great batting average, and loyalty to Pakistan cricket.

To begin with, Babar Azam has been a great ambassador for Pakistan cricket, having played for the team since his debut in 2013. He is the highest-ranked T20I batsman in the world, and his impressive batting average of 49.46 makes him one of the most consistent batsmen in the game. His loyalty to Pakistan cricket is also well-known, as he has featured in every international tournament since his debut and has been an important part of the team’s success.

However, such a positive and exemplary record can be marred by one single incident. To make matters worse, Babar Azam has now been accused of sexting with a teammate’s girlfriend, which is a serious breach of trust and could potentially have damaging implications for the cricket team.

The accusation was first posted by verified Twitter account Dr Nimo Yadav, saying: “Babar Azam sexting with GF of another Pakistan cricketer and promising her that her bf won’t be out of the team if she keeps sexting with him is just.”

According to FoxSports, among the accusations — which have been widely reported by Pakistani and Indian publications — was that Babar promised the woman that her boyfriend’s spot in Pakistan’s XI was safe if she kept sexting him.

But the account, which is a parody page, then deleted the original tweet and apologised to Babar directly.  Hours after dropping the bombshell, Dr Yadav lashed at the media who for picking up his fake news and reporting it as a genuine sex scandal.

“What a clown media we have, mirror now telecasted a dedicated show based on my satirical tweet and put nasty allegations on Babar Azam without even verifying the source of the news (me),” Dr Yadav tweeted. “I was the one who started bf in the team story, this was fake. Apologise to Babar.”

The potential scandal didn’t appear to impact Babar, who posted a happy snap while appearing to be on holiday in Sydney on Monday.

Doesn't take too much to be happy ☺️ pic.twitter.com/udKmZTHl6V

#WeStandWithBabar is now the top trend on Twitter in Pakistan. The support Babar Azam is receiving from fans in the country is unprecedented.

Indian propaganda exposed yet again. The Instagram user, eish.arajpoot1, which leaked the images and videos of Babar Azam, was created in #India, with the account registered to an Indian phone number.#WeStandWithBabar #WeStandWithBabarAzam #BabarAzam𓃵 #FactCheck pic.twitter.com/3wdPKDgPWD

Its an honor for me to live in Babar Azam era ❤️
#WeStandWithBabar pic.twitter.com/i4YqrPoqve

The ONLY thing I'll Never goona regret is being This man's LOYAL Support N never leave N Stop supporting Him At any cost #StayStrongBabarAzam #WeStandWithBabar pic.twitter.com/KgQN8UuilR

IF THE WORLD IS AGAINST HIM, I'M AGAINST THE WORLD 🙌#WeStandWithBabar pic.twitter.com/t2tGVS65lB

Even though it was just a hoax at the end of the day, it is important to remember that reporting such incidents that are linked to national stars like Babar Azam spread like wildfire and tarnish Pakistan’s reputation worldwide.

There is no doubt that Babar Azam has been a great player and a great ambassador for Pakistan cricket, and his fans have the right to express their support for the cricketer through social media campaigns.

Here’s How Pakistani Female Golfers Made an Uproar in 2022

3 Exciting Things About Karachi’s Electric Bus You Should Know