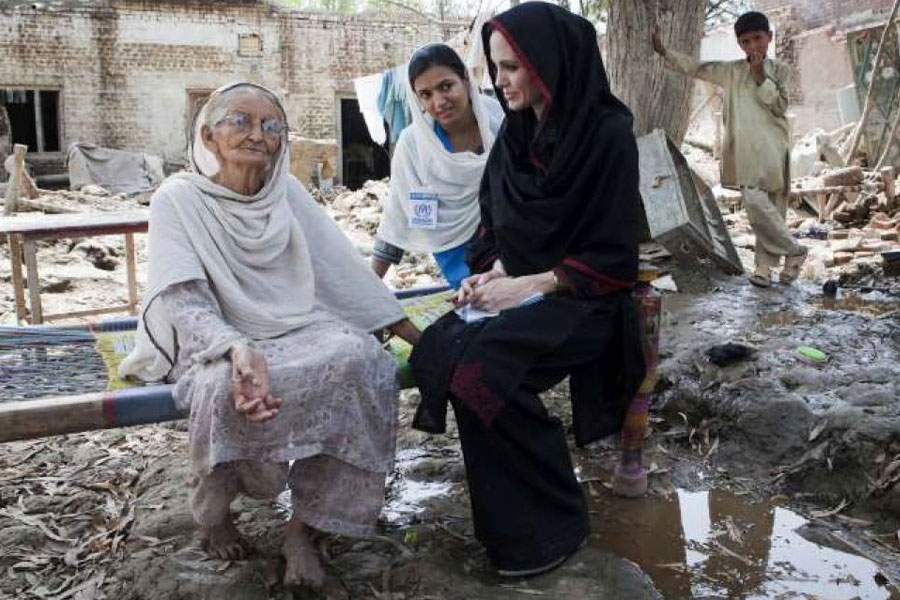 Hollywood superstar Angelina Jolie is reportedly due to visit the flood-hit country of Pakistan. Jolie is not just one of the most popular actresses around the globe, she is also a filmmaker, humanitarian, and the United States (UN) Special Envoy.

Reportedly, the visit will be to see the damage done by the unprecedented monsoon rains, and floods, and to carry out relief activities and rescue operations.

Ever since the floods have hit, almost 1/3 of the country has been displaced, leaving over a thousand dead and hundreds of thousands homeless.

While other countries have promised to provide aid and money to help Pakistan get back on its feet, citizens of the country including its stars are doing their best.

However, many are still inaccessible and unable to get food, shelter, medical attention, and the help they need. Moreover, reports of children dying from starvation, and people passing from water-borne diseases or snake/scorpion bites are also making rounds.

Women are finding it difficult to find a safe and private spot to go to the bathroom, they are scared that while doing so, a man may try to take advantage of them or the children as there is no more ‘veil’ in between.

This visit would not be Angelina Jolie’s first to Pakistan. The humble woman visited in 2010 after the disastrous quakes and floods hit the country causing major devastation. She personally met the families of survivors, heard their stories and consoled them.

5 Reasons Why Maternity Leaves are Important