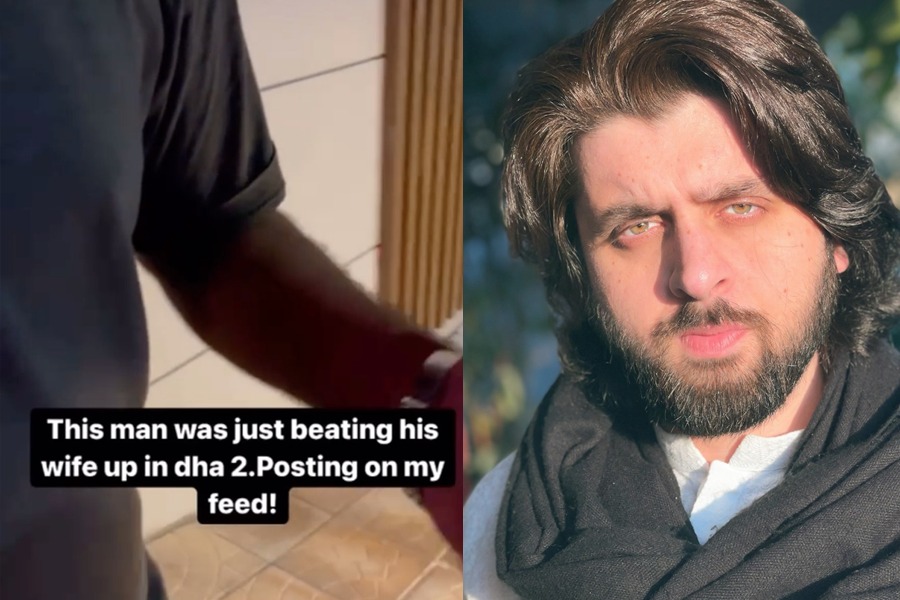 Amid recent domestic violence cases and gruesome murder cases that surfaced in Pakistan, many people are fearful for the lives of women in the country.

If people spot a woman being beaten up in public, or worse, threatened for her life behind doors, they take it seriously and immediately report it to the authorities.  More and more cases are being reported to the police every day.

Actor Meiraj Haq spotted and recorded a violent husband beating his wife in public in Islamabad’s DHA Phase 2 at Celebration Planet. The actor tried to intervene and call the authorities, the man in question yelled at him,

She’s my wife, you have no right to do anything about it. I can’t tolerate you coming in my wife and my problem. I was beating her up because it was my problem.

The actor also got the staff at Celebration Planet involved to call authorities as soon as possible and also urged them to speak to the lady who was being beaten up by his husband in public. Apparently, the man who was beating his wife was an employee at Celebration Planet. Whilst he beat up his wife, everyone else was watching instead of reporting it.

Delay in Passing the Domestic Violence Bill in Pakistan

Regardless of the alarming acceleration in numbers of domestic violence cases in the country, the Bill for Domestic Violence (Protection and Prevention) Act 2020) introduced by Human Rights Minister, Shirin Mazari, has not yet been passed in the National Assembly.

The bill aims to check the inhumane acts of violence occurring in closed vicinity, turning them into an unsafe environment. These acts include physical and emotional abuse, for instance, threats, verbal abuses, slapping, punching, etc. This also includes any financial or economic abuse. The Bill also aims to empower courts to give custody protection, residence orders, and interim orders, along with monetary relief to violence victims.

According to the bill, “all acts of physical, emotional, psychological, sexual and economic abuse committed by a respondent against women, children, vulnerable persons, or any other person with whom the respondent is or has been in a domestic relationship that causes fear, physical or psychological harm to the aggrieved person.”

Following actions in the list will also be defined as domestic violence:

The delay in passing the bill by the state has been due to the bill’s opposition by the Pakistan Ulema Council, renowned religious scholars, and other right-wing elements. The bill proposes laws that will punish men if found guilty of abuse or violence. They will be liable to pay heavy fines, go to jail for 6 months to 3 years, wear GPS trackers, stay away from the complainant, not contact the complainant, move out of the house, etc.

Since Tuesday night, the hashtag #ArrestUsmanMirza has been trending on Twitter after graphic videos of an incident circulated on social media. In the clips, Usman Mirza was seen assaulting, torturing, and stripping a woman and man. Islamabad Police have now arrested Usman Mirza.