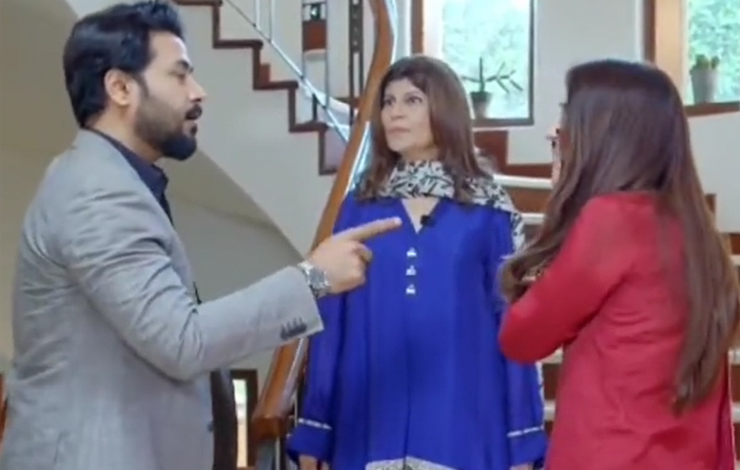 ARY Digital’s latest drama serial Angna has been making rounds on social media since yesterday for a scene in its latest episode. The scene in question shows a husband slapping a wife in front of his mother, which has been severely criticized online.

Domestic abuse and gender-based violence are on the rise in Pakistan. Drama makers, to the actor, all those who are playing a part in some capacity to produce such content must take responsibility for their actions and discourage such scenes from making it to tv.

Angna has been categorized as a family drama but shows a woman being slapped for not changing her clothes by her husband just because the mother-in-law wants her to change. This is not family content. Even PEMRA lets this kind of content make it to tv, but a little affection between a couple is banned.

“This is the kind of filth we see in nearly every single television show in Pakistan and then wonder why our society is so f**ked up,” tweeted a user.

Everyone from top to bottom, including actors, producers, writers, and directors, are to be blamed.

This is the kind of filth we see in nearly every single television show in Pakistan and then wonder why our society is so fucked up.

Amazed that our actors, producers, writers and directors don’t know better than to sign up for this crap.

A once proud industry destroyed https://t.co/6HA3bunbyB

Every other week; there is just more absurd content from #PakistaniDramas that one ups the last one.

On top of that, I don't understand how actors, like #RubinaAshraf of a vast legacy don't speak out over such foul content.#BanPakistaniDramas https://t.co/4QXtuYv9Su

Veteran actress Samina Peerzada also tweeted in this regard. She wrote, “….It is not just the actors to be blamed for showing violence against women in plays but the entire setup…”

I retweeted Hassan Hussain’s tweet about a scene from a play. it’s not just the actors to be blamed for showing violence against women in plays but the entire set up starting from the top. We have to stop this notion that slapping women in a scene will get ratings. Content will.

TW: Domestic Violence ⚠️
It’s 2022 and our dramas are still glorifying the man-child archetype. Here’s a scene from drama ‘Angna’ depicting a classic case of a ‘mommy’s boy’ as he assaults his wife in front of her. #AliAbbas #RababHashim #RubinaAshraf

this is absolutely disgusting. I will never understand why they think this is acceptable like wtf. https://t.co/r4fzjDfBLN

“I’d rather have my kids watch a loving and healthy couple rather than this bullshit..”, wrote another user.

and pemra is still whining over a hugging couple, i’d rather have my kids watch a loving and healthy couple rather than this bullshit. there’s nothing shameful about loving, humans are literally made to love and if this is the shit our shows promote then fuck off please https://t.co/TGeTUXrfRX