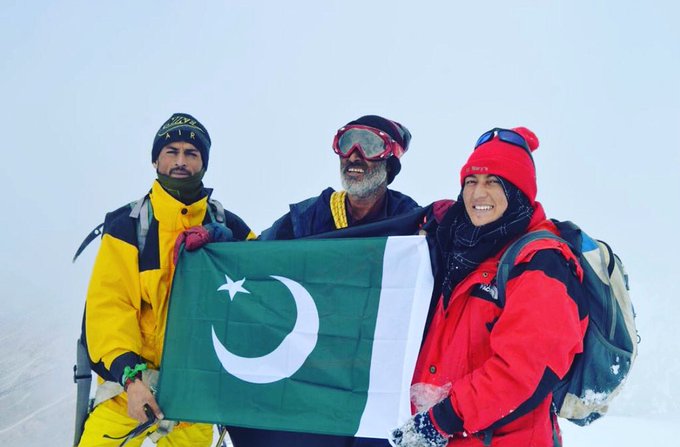 Amina Shigri, a Pakistani 15-year-old from Gilgit-Baltistan, has become the first girl to summit Khosar Gang Peak. She was part of a three-member family team of climbers who successfully summited 6,400 meters Khosar Gang Peak located in northern Pakistan.

The other two members of her family who joined her in the expedition were her brother and mother, who were proud of her accomplishment to become the first female from Shigar valley of Gilgit-Baltistan to climb the peak.

On August 26, the family commenced their journey to climb Khosar Gang Peak. It took over one week for the 3 of them to scale the peak located in Shigar valley. Once the news was out on social media, congratulations poured in as the pleasant news was shared.

While speaking to local media, Amina said she had dedicated her latest achievement to Ali Sadpara. While Amina was pleased with her own talent, she encouraged other men in society to let their daughters and sisters come out of their homes and show their real talent.

Amina also said she is disappointed that during the summit, the clouds became a real nuisance, due to which she and her bother, and father were not able to witness K2 in its glory.

More power to you #AminaShigri And may you have a great future as a mountaineer ahead.

And indeed you are a hope for all the young women in the region. https://t.co/C4uAgqJt97

So proud of this young lady, Amina Shigri, flanked by her father and brother on the summit, Khosar Gang peak.

You know what breaking a barrier means? Exactly this what it looks like.

More power to you and wish u a great career ahead.

Sajid Ali Sadpara also congratulated Amina Shigri on her success. He wrote on Twitter, “Congratulations to 1st female Balti Climber Amina Shigri for her 1st ascent of Khusor Gang 6400m, along with her father and brother. Besides snow, she blazed the trail for all females of the Baltistan region and proving that they can touch skies if given opportunity #AminaShigri

Congratulations to 1st female Balti Climber Amina Shigri for her 1st ascent of Khusor Gang 6400m, along with her father and brother. Besides snow, she blazed trail for all females of Baltistan region and proving that they can touch skies if given opportunity #AminaShigri pic.twitter.com/8vCDbqaJNx

You rule, gir! Summit every peak, do it in power! 🇵🇰#AminaShigri https://t.co/mqNsR2v9Bg

Shehroze Kashif Becomes the Youngest Pakistani to Make it to the Summit of Mount Everest at Age 19. Read the full story here:

Lahore to Have First Transgender Rehabilitation Centre in the Country