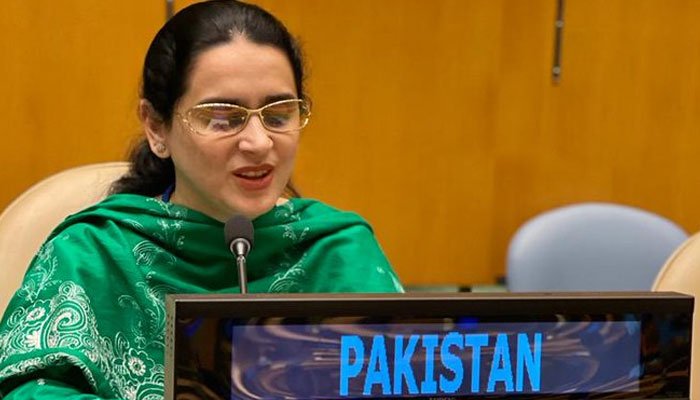 On Saturday, the visually impaired diplomat from Pakistan, Saima Saleem, won the praise of many on social media, including Pakistan’s permanent representative to the United Nations Munir Akram, for her commendable United Nations General Assembly (UNGA) speech by using braille (a form of written language for blind people) for the very first time to present the country’s position.

Saima is the first blind Civil Servant of Pakistan. She holds several honorable degrees including M.Phil in English Literature from Kinnaird University for Women (Pakistan, 2008), Fulbright fellowship in Advanced Studies in International Affairs from Edmund A. Walsh School of Foreign Service, Georgetown University (United States, 2012) and LLM in international law with a specialization in international human rights law and international humanitarian law from Geneva Academy, University of Geneva (Switzerland, 2019).

Currently, Saima is working as the Deputy Secretary at the Prime Minister Office. Prior to that, she was Human Rights Expert in Geneva.

Pakistan’s permanent representative to the United Nations,, Munir Akram congratulated Saima Saleem on her powerful speech representing the country during the UNGA session on Twitter. He wrote, I congratulate Saima Saleem, my team member, for successfully putting forward Pakistan’s position by exercising the right of reply. She spoke using Braille for the first time from UNGA hall

Saima really did a great job. Hats off to her… https://t.co/b5em6Pe3pD

Splendid and robust representation by a well chosen delegate. https://t.co/e3cxusxgxV

Weldone ! Pride for Us ! https://t.co/HTiyDSI5Pb

She don't have eyes but much wiser than most of us. https://t.co/ZhJAQgPevQ

In her speech, Saima presented hard-hitting statements opposing India’s occupation in Jammu and Kashmir. She said despite Jammu and Kashmir being an internationally recognized  disputed territory, India’s presence in the region remains. She said it is not India’s internal matter and that India’s use of the false statements, repeating stale arguments are similar to all occupiers.

She said that final settlement needs to be decided under UN auspices in accordance with the democratic principle of a free and unbiased election. She then called upon the international community to take knowledge of the captivating evidence and hold India accountable for the henious crime it has committed in the region for decades.

You can watch the full speech below:

Visually impaired Pakistani student Khansa Maria, currently a student at Georgetown University’s campus in Qatar, bags a scholarship to Oxford University. Khansa will be pursuing a master’s degree in evidence-based policy intervention and social evaluation next fall. She is Pakistan’s 2021 Rhodes Scholar-elect.

How You Can Get a Free Ticket to Dubai Expo 2020