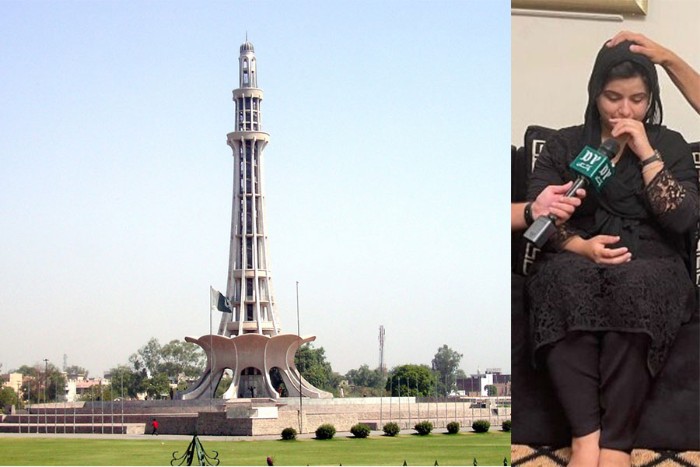 On independence day, a mob of at least 400 men harassed and assaulted a woman in Lahore’s Greater Iqbal Park.

In her complaint, which has been lodged with the Lari Adda police station, the victim said she was filming a video near Minar-e-Pakistan on the 14th of August with her friends, who she went along with Minar-e-Pakistan when a mob of 400 men attacked them.

“I was stripped, and my clothes were torn apart,” she said while detailing the graphics of the assault. The woman told the police that the mob picked her up and tossed her around. Her phone, cash, and gold ornaments were also snatched. She added that she cried for help, but no one came to her rescue.

The horrifying incident was recorded by many people, and the videos have been circulating on social media. Today, the top 5 trends on Twitter trending in Pakistan were related to the incident: #minarepakistan, #lahoreincident, #ayesha, #400men, and #NotAllMen.

Every day we hear of ever-increasing incidents against women from rape, child abuse, monstrous murders, and now this tragic incident.

The girl was interviewed by reporters who confirmed that neither she was in vile clothes nor had she ever made any indecent videos.

Celebrities, activists, reporters are appalled to see the videos on social media of the tragic event and are calling out men of this country to address this heinous crime, so no more women have to ever face such tragedies in the country. All in all, people called out for “No More Victim Blaming.”

I can’t believe what I just saw!!! I’ve said it before and I will say it again – make an example out of these men!
#MinarePakistan

Damn I’m sorry.. I keep forgetting – it was Her fault!! Poor 400 men.. they couldn’t help it. #MinarePakistan

The assault of a young women by a mob at #minarepakistan should shame every Pakistani. It speaks to a rot in our society. Those responsible must be brought to justice. The women of Pakistan feel insecure and it is all our responsibility to ensure safety and equal rights to all.

Disgusted , Furious , Heartbroken , Ashamed !
Ashamed of being a man today , ashamed that the men of this country keep doing these horrible acts every other day, ashamed that the law of my country does not hang these predators so that this doesn't happen again #MinarePakistan

We cannot continue to bury our heads in the sand. #Pakistan is not safe. Not for our women. Not for our children. Our children aren’t safe from rape even in death. This is the disgusting shameful reality. #MinarePakistan

All those trying to justify, defend or downplay the horrific incident at #MinareEPakistan will be blocked. No time for paid trolls trying to project an image of safety when women are being raped from motorways to historical sights to graveyards

Anytime now you're going to hear 'well why did she go there? Why was she making a tiktok?'. If people can do that with noor mukaddam rest assured they'll do it here too. And they'll get support because believing it was her fault is easier than accepting reality.

Disgusted, petrified, ashamed and speechless.. Quaid-e-Azam! We are sorry. #minarepakistan .

Now that we hav a plethora of evidence of what unfolded at #minarepakistan Can we finally see our police in action by putting those men responsible for this gruesome act behind the bars? Is this too much to ask for our women?#400men #lahoreincident #needanswers #protectourwomen

The clips are truly devastating to watch

The girl screams for help as she’s groped by hundreds of men. There is Azaan going on in the background.

I’m finding it hard to wrap my head around that scenario. #minarepakistan

I want to hear what the “not all men” brigade has to say this time!!!
Hope this incident is dreadful enough to open your eyes..atleast this time there will be no judgement about the girl & how she could have AVOIDED the situation!
Extremely DISGUSTED! Disturbing!#lahoreincident

Aamir Liaquat said he spoke to Imran Khan regarding the matter. He is sad and angry. Ayesha will get justice soon!

Just spoken to the PM Imran Khan regarding Minare Pakistan Incident, Imran Khan is sad and angry over the Lahore incident. Ayesha will get justice soon In Sha Allah#MinarePakistan

What she was wearing is no longer a question!

Also no more of, Islam gives women all the rights.
Unfortunately most here dont follow even Islam's basic tenants of human decency but know how to preach it to others like an Islamic scholar

Signs or Symptoms that May Indicate a Hormonal Imbalance

How to Create Mood Ambience with the Perfect Lights & Candles