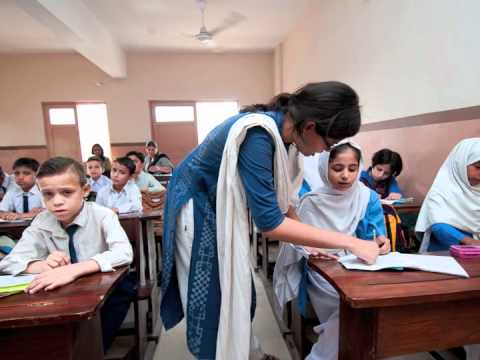 Just when you think it can’t get any worse for women in this country, another incident forces you to change your beliefs. A female teacher in Mianwali was suspended from her job for being a mother and bringing her child to work yesterday, 28th September 2020.

The female teacher named Ishrat Sattar, was suspended for misconduct and inefficiency after she brought her infant to school during an inspection by DEA, CEO of Mianwali – she was found playing with her child in the classroom.  The incident sparked quite the frenzy on social media with #FemaleTeacherSuspension trending all day on Twitter!

We live in a society where children are
insecure.
It wasn't such a big crime ..
👇
"Bringing a Child to school by a school teacher"

According to latest updates the teacher has been reinstated and her suspension has been withdrawn after the incident caught social media attention and sparked public fury.

The teacher Ishrat Sattar works in the Higher Secondary School Harnoli which is located at Tehsil Piplan District of Mianwali.

The incident forced people to speak up against the unfair and unjust act, pointing out how there is open discrimination against government and private sector employees.

#FemaleTeacherSuspension is what makes me feel stranger in this department. I don't belong to the place perhaps. No compassion, no affiliation, no empathy. Just pharaohs roam around!

#FemaleTeacherSuspension these policies are taking out the roots of education and making a deep psychological effect over nation builders so that we nation builders may not produce better than them officials in future….

We live in a society where children are
insecure.
It wasn't such a big crime ..
👇
"Bringing a Child to school by a school teacher"

They demanded equal rights for teachers; if the Peshawar Additional Commissioner Sara Tawab was praised for bringing her child to work and performing her duties with a baby on her lap, why did a female teacher get suspended for the same action?

The New Zealand Prime Minister Jacinda Ardern brought her baby to the United Nations General Assembly and was praised by the world, while a teacher has been subjected to suspension for doing the same. This is horribly biased and prejudiced. But not a shock.

Why dual standards for Additional assistant commissioner and a teacher?#FemaleTeacherSuspension#Team_Defenders pic.twitter.com/byB2Bwnr0k

As the latest updates reveal, the suspension of Mrs. Ishrat was revoked, and she was reinstated. Here is the letter as proof. However, Dr Murad from PTI had a different story to tell. Read his tweet below.

Following is the Actual Report of the Teacher being suspended. Verified by various sources not just CEO. Please do not become activists just because you have telephones and not FACTs. I have asked the CEO to restore her with a warning. If this happens again, action will be taken. https://t.co/sLYOvEU24G pic.twitter.com/rI2z3LnKcS

Is being a mother a crime in this society? Can’t a mother work and look after her kids at the same time? Are quitting their jobs and staying home to look after their children the only option for the working women in this country. If not, why are they bashed, labelled as inefficient and suspended for bringing their children to work?

The government or private industries, need to invest in daycares. We need to give women options for childcare, so that she can work worry free for a few hours during the day. This isn’t too much to ask.

What do you think really happened? Is this some political agenda, or an actual blunder by the school which is now being covered up? Share your thoughts in comments below.