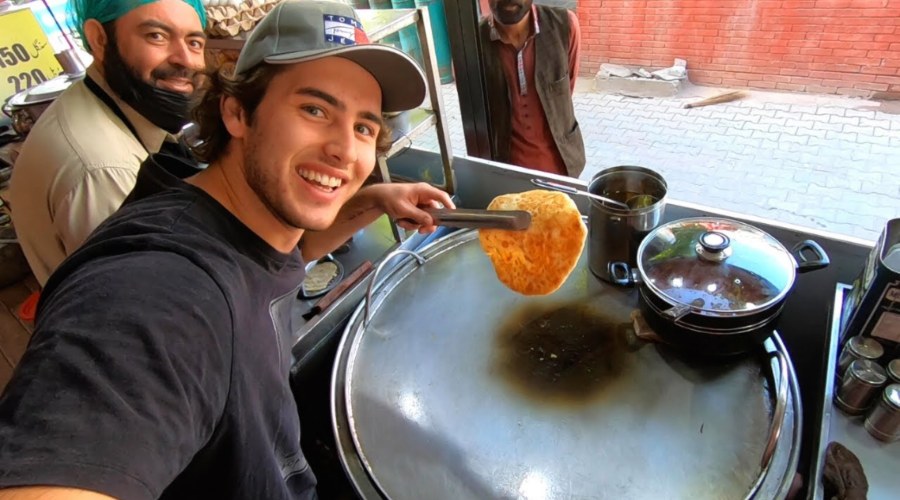 Pakistan’s tourism industry is flourishing with each passing year, and that is no secret. While locals make their way to the northern areas of Pakistan, international tourists have also been spotted enjoying the yet to be discovered beauty of Pakistan by travellers abroad.

An Australian YouTuber Luke Damant made his way to Pakistan after spending an ample amount of time in India a year ago. Luke first came to Karachi from where he was planning to travel up North to Islamabad. He came across cheese paratha that was being served at a local restaurant and instantly ordered it. Much to his surprise, he instantly fell in love with it!

In Islamabad, Luke was in awe of the hospitality of locals who offered to pay for his food and gave him free souvenirs

From here onwards, there was no going back! Everywhere Luke travelled next, he wished he could find oozing hot cheese parathas.

A video he recently uploaded on his YouTube channel displays his love of cheese paratha at large as he leaves his guest house at 1 AM to hunt down cheese parathas and finds his favourite spot in Islamabad open for a feast.

Apart from spectacular cheese parathas, Luke also tried chicken biryani and finally understood what was the buzz about

A pretty pink in colour, Kashmiri Tea is a Pakistani hot beverage. It has a rich, creamy, and sweet taste. A kehwa (tea base) is first prepared with Kashmiri or Green Tea leaves and whole spices like star anise, cinnamon, cloves, and green cardamoms. Then the kehwa is boiled with milk and sugar to make the tea.

Weekend on WOW: How to Make Kashmiri Tea: Recipe