Our favorite Pakistani actress and morning show host Sanam Jung is finally back on the tv screens after a long time and the fans can’t stop talking about her comeback in the latest Hum Television drama serial ‘Qarar’.

The story of the drama is written by Aliya Bukhari and the director is Barkat Sidiki. Alongside Sanam Jung, the show stars Muneeb Butt, Ali Safina, Rabab Hasim, Seemi Pasha and Mekaal Zulfiqaar.

The drama revolves around the cultural norms in a typical Pakistani household, dealing with the thick and thins, highs and lows and their bonding getting intense during the course of time.

However, the drama has a very common storyline in which an orphan young girl lives with her Mamoo, tolerating his wife’s and cousin’s behavior who are always poking their noses in her life and blaming Maya for their own mistakes. Unfortunately, our audience enjoys cliché storylines and therefore, dramas with mainstream scripts tend to be the highest rated.

Moving on, lets dive into Sanam’s character in the show and the recent few episodes of ‘Qarar’ because you all have been curious for quite some time now.

Sanam Jung Maya has given her heart to Ali Safina Salman for their marriage as he gives her the attention she needs. But, things get bad when Sanam’s gets to know that her engagement has been fixed with Muneeb Butt Ammar. Maya’s mother approaches Rabab Hashmi Faria for letting Ammar visit them for proposal and Maya urges that since Faria started this situation, she should be the one who ends it too.

Faria meets Ammar and tells him to reject his proposal for Maya and Ammar agrees to it.  Later, Maya calls Salman just so his wife answers it and she realizes her mistake. Now, Maya decides to accept to Ammar’s proposal but the only person to blame is Faria now as she was the one to tell Ammar to reject his decision to ask Maya’s hand in marriage.

Later on, Maya’s family accepts Ammar’s proposal and he just couldn’t contain himself with joy  Faria is now the bad person in Ammar’s eyes and has assumed that she only wants the worst for him, which will make him hurt her in the coming episodes. 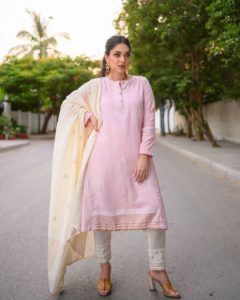 To sum it up, it’s safe the say that even though the storyline is pretty cliché , what has made this show the talk of the town and have the fans hooked to their tv screens is Sanam Jung’s comeback after her last Hum Television drama ‘Mai Na Janoo’ alongside Zahid Ahmed.

Sanam has never failed to win the audience’s hearts and ever since she has been in the industry, she has received love and appreciation from her fan following all around the world. In 2016, she took a break from showbiz after getting married to Syed Abdul Qassam Jafri and now has a beautiful three year old baby girl Alaya. Whether we talk about her morning show ‘Jago Pakistan Jago’ or some of her best dramas ‘Dil e Muztar’ and ‘Muhabbat Subh Ka Sitara‘ the actress has always kept her fans close to their tv screens with her contagious smile and wonderful acting skills.

Even though, most of us believe that ‘Qarar’ won’t be Sanam Jung’s best drama, her role in this show is quite different from the ones she’s usually played in the past and even though the storyline line seems quite predictable, it has kept the audience engaged and we still can’t wait to switch to Hum tv and watch her latest episode every week.

Are you following Sanam Jung’s latest drama? What are your thoughts on it? Share with us in the comments.