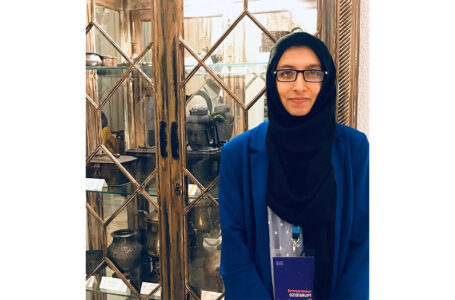 Sakina Abbas has been named as Pakistan’s first female Google Developer Expert for Flutter and Dart. Finally, Pakistani women are setting foot in the tech ecosystem and are making their mark. Abbas is a FAST university graduate; she owns her own business called ‘ReacTree’. It was her passion for growth and technology that helped her kickstart her own venture.

Who are Google Developer Experts?

What are Flutter and Dart?

Introduced by Google, Flutter is an open-source UI SDK, a software development kit that allows users to develop applications on both iOS and Android. Other than that, users can also develop web apps essentially for all kinds of platforms.

Designed for application development, Dart is an easy-to-use programming language. It is one of the most popular languages to develop apps due to its familiarity with the C language.

Sakina earned her title of Google Developer Expert by showcasing her interest in Flutter and Dart which led her to learn the technology and share her expertise with people worldwide. Upon hearing news of her latest achievement, the new GDE said:

“Thank you to each and every one of you who has supported me all along. It’s the fact that you’re able to learn something from me and then apply it yourselves at the end of the day that motivates me to keep contributing to this community in every way I can.”

Here is How Pakistani Freelancer Ayman Sarosh Earns a 6 Figure Salary on A Monthly Basis. Read the full story here:

It is possible to earn a six-figure salary after working tirelessly for years, but who would have thought you could earn a six-figure monthly salary by staying at home? Well, one such example is Ayman Sarosh, who has earned $15,000 by working on a freelancing website called Upwork within 18 months, which means she makes roughly Rs. 130,000 on a monthly basis.

Here is How Pakistani Freelancer, Ayman Sarosh Earns a 6 Figure Salary on A Monthly Basis

How to Make Easy Chicken Korma: Ramadan with Wow