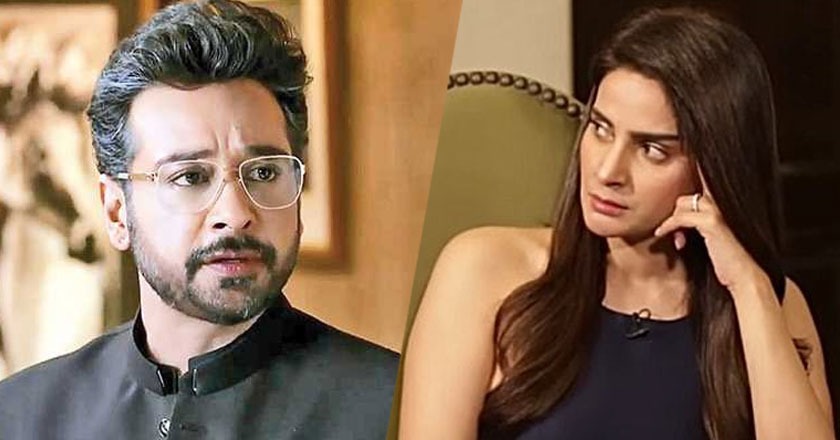 Saba Qamar has been in the spotlight the past few days for her phenomenal acting in Sarmad Khoosat’s latest ‘Kamli’.

Not only did the diva receive a standing ovation at the private premiere amongst her fraternity, but she also received commendable praises from those who have had the fortune of watching the masterpiece.

However, the starlet has once again become the center of attention, because this time around, she cleverly and respectfully replied to another well-known name in the industry, actor Faysal Qureshi.

Without mentioning her name aloud, the actor shared an ageist remark about Saba Qamar in her new serial Fraud. He said:

Translating to that is she can portray a 24 years old character on screen, then I should be shown as a 27-years old.

During an interview, when Saba was asked about this remark by the host, she politely said:

I respect Faysal Qureshi ji a lot. He is a brilliant actor, I respect him. It’s his opinion which I take very gracefully but what can I do Faysal, I am still getting these roles

Whether she is playing the role of a young adult or a mother, be it in Fraud, Mrs & Mr Shamim, or her past projects including Cheekh and Bhaagi, the actress has time and time over again proved that she knows how to get the job done.

Moreover, Saba is one of the few Pakistani stars who have had the opportunity to work in Bollywood, that too alongside an internationally accredited name, Irrfan Khan – which is something only a handful of individuals can claim.

Nonetheless, we wish both the stars the best of luck in their future endeavours, and hope to one day see them together once again on the screen after they have set their issues aside.

Have you seen Saba Qamar’s Kamli yet? Share your thoughts about the film in the comments.
Stay tuned to WOW360 for all the latest news and updates.