Noor’s barbaric murder that took place in Islamabad has shocked the nation to its core. The heinous crime has sparked a discussion on social media over women and their rights in this country. People are actively offering each other help and asking masses to call out toxic and predatory men in close circles, so a crime such as the barbaric murder of Noor never takes place again.

Pakistani actor Saba Qamar is also going through a series of emotions, as all of us are. She went on to her social media to share a powerful message with her fans.  In a post, she wrote, “Someone said today that all of us women are just one man away from being the next hashtag, and it sent shivers down my spine.”

In the past couple of months, we have witnessed 3 prominent hashtags that back up stories of women being abused, raped, or killed in Pakistan at the hands of their family, partner, or husband. 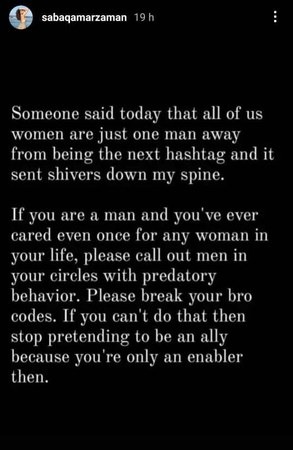 “If you are a man and you’ve ever cared even once for any woman in your life, please call out men in your circles with predatory behaviour. Please break your bro codes. If you can’t do that, then stop pretending to be an ally because you’re the only enabler then,” she concluded.

Saba Qamar played the character of late Qandeel Baloch in the television serial Baaghi, who was a high profile honour killing case that took place in Pakistan.

In the light of the events, actress Yasra Rizvi has pledged on Instagram to raise a feminist son.

I vow to raise a son who is kind, humane, fair, compassionate and respectful. A man with whom women, children, transgenders, other men, animals, every living being feels safe, who is not threatened by women and their agency, who doesnt take their vulnerability as license to exploit, whose first response is to empathize, who doesnt blame the victim, who understands that human life is precious and not anyone’s to take, who knows that every human being has the right to choose, prosper and shine, who knows that he cant touch or for that matter speak to anyone without their consent, who UNDERSTANDS that being a man is not a privilege its a responsibility! I dont know what we can do about the monsters we live amidst or the sham of a society we are a part of at present other than protesting its very existence but we can change the future by starting today. Be more mindful while raising your sons, pay that extra attention to your boys and what they are getting away with, STOP them now from becoming the problem tomorrow.

It is great to witness prominent figures such as Saba and Yasra from the film industry coming forward and becoming examples for others to follow.

The son of a prominent businessman in Pakistan, Zahir Jaffer is in police custody after being found with Noor Mukadam beheaded at his house in Pakistan’s capital, Islamabad. The 27-year-old’s father is Shaukat Mukadam, a former diplomat who served Pakistan as an ambassador to South Korea and Kazakhstan.