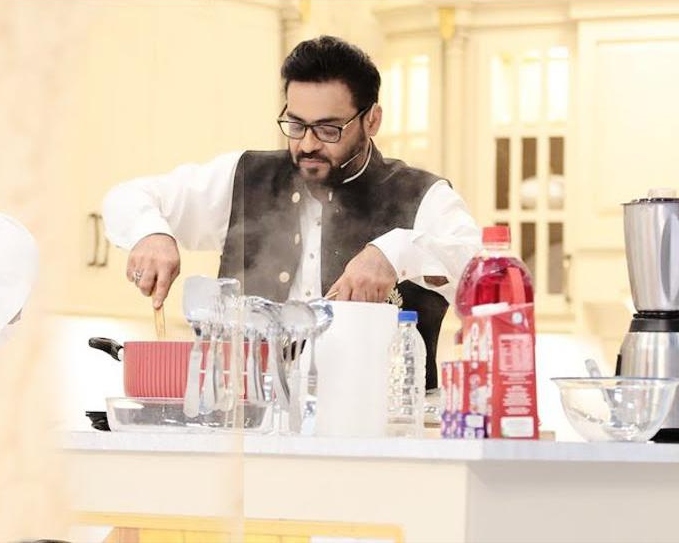 Aamir Liaquat is back with his Ramazan transmission on Express tv. The transmission called the Piyara Ramazan has two shows that are live on tv before iftari and sehri. Liaquat appears to live twice with different patterns for each show.

He who is known for running entertainment-filled Ramazan transmissions seems to have changed his way due to the pandemic. The OST of the show Piyara Ramazan just came out a few days ago which was rejoiced by many.

Watch the OST of the show Piyara Ramazan here:

The show can no longer have a live audience to interact with which means all the fun activities can no longer happen on the sets of the Ramazan transmission and no more giveaways as the producers of the show are carefully taking care of the SOPs and trying their best to keep limited interaction among the people on the set.

So what’s the new course of the show? Well, there are few religious scholars who are present at the show who with Aamir discuss religious matters. Guests seem to have also been invited to the show for different segments. For one, the part, the audience loved online was Aamir Liaquat cooking chicken karahi on his show while also conversing with his guests.

He carefully dictates the recipe of the dish with his audience, when to add what ingredient, and how to avoid common mistakes while making Karahi which, to be honest, we thoroughly enjoyed too. We are sure no one has seen this side of the host before.

Audiences on social media are eagerly waiting to see what else does the great host of Ramazan transmission has in-store for them throughout the month of Ramazan to keep them entertained.

Have something to add? What’s cooking in your kitchen? Let us know in the comment section below.