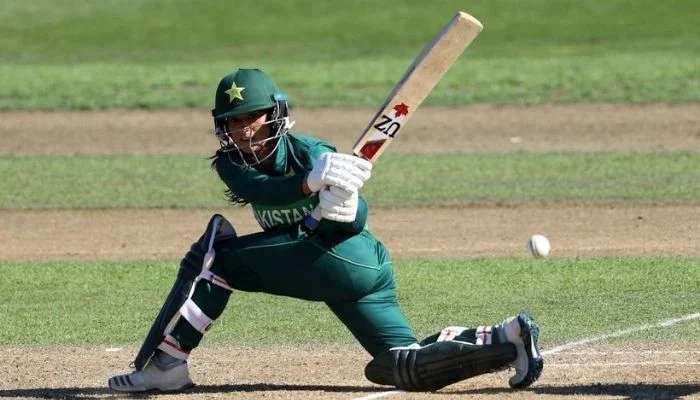 Pakistani Cricketer Sidra Amin has become the first woman cricketer to score a century in the World Cup 2022. She finished the century on 136 balls.

A proud moment for the Pakistani cricket team indeed! The women’s Cricket team of Pakistan is finally catching up with the world, with women in green competing in different series/world cups across the world.

Sidra Amin and Nahida Khan have put up the highest opening partnership in ICC Women’s Cricket World Cup history for #TeamPakistan by surpassing the previous best of 84 between Maliha Hussain and Sharmeen Khan, scored in the 1997 edition, tweeted the real PCB on Twitter.

Sidra Amin and Nahida Khan have put up the highest opening partnership in ICC Women's Cricket World Cup history for #TeamPakistan by surpassing the previous best of 84 between Maliha Hussain and Sharmeen Khan, scored in 1997 edition

Ameen’s century went into vain as Pakistan was defeated by nine runs in a pulsating encounter with the Bangladeshi team, who clinched their first-ever Women’s world cup victory in the competition.

While many congratulated the team for Sidra’s latest milestone, they critically criticized the Pakistani women’s team to pick up the pace and perform better in the World Cup.

This was Pakistan’s 18th consecutive defeat in WWC matches, they last won in 2009.

HISTORY: Sidra Ameen becomes the first ever female cricketer from Pakistan to score a hundred in a World Cup. #CWC22

Sidra Ameen becomes the first Pakistan woman to score a century in the World Cup!

Sports journalist, Zainab Abbas also tweet in this regard. While she was pleased with Sidra Ameen’s century, she addressed the issue at hand, “unable to close games”.

Another loss for the girls in green,Sidra Ameen after scoring a 100 should have taken Pak over the line with 25 required of 18 balls. Yet again the same issue of being unable to close games. #CWC2022

Sidra Ameen is the Women of the match 💯
Huge applause for her Big knock pic.twitter.com/xQKzaP5s1o

It seems like Pakistan has got the blue print from Bangladesh. Brilliant running between the wickets and sensible batting of Sidra Amin and Nahida 👌
Opening stand going strong.#CWC22 #PakvsBan

Indian journalist criticizing the Pakistani cricket team tweeted, “..unless they change gear, Pakistan are losing this.”

Well played, Sidra Amin, but unless they change gear, Pakistan are losing this.

The Pakistan Cricket Board (PCB) confirmed holding the First PSL-style league for women cricketers in the coming year. Last year, in November, the PCB chairman, Ramiz Raja had, announced that he hopes the Pakistan Cricket Board (PCB) will launch a women’s version of the Pakistan Super League (PSL) Twenty20 tournament in the upcoming year. The announcement was relatively vague. However, it held significant meaning for women in sport.

10 Best Things to do in Karachi, PAKISTAN and Attractions You Need to Check