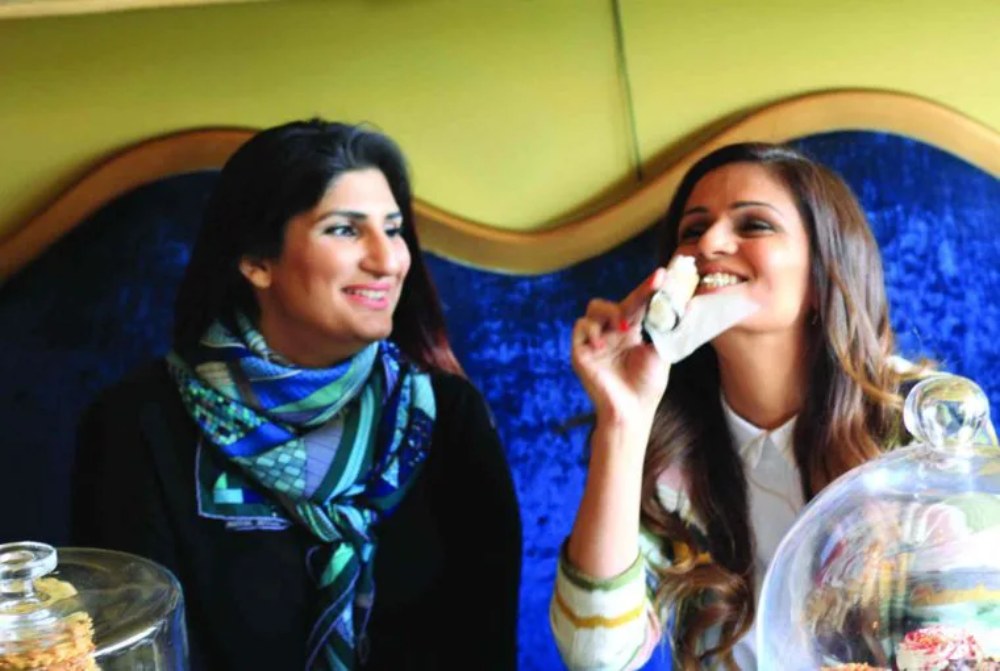 As a society, we are still under the influence of a colonial hangover. We tend to make fun of people who can’t speak proper English, especially of those who belong to lower socioeconomic class. One such fiasco took place in Cannoli by Cafe Soul located in sector F-7/3 of Islamabad where owners Uzma Chaudhry and Dia Haider mocked their manager, Awais who is not fluent in English.

So What Really Happened?

The footage that has now gone viral on social media platforms caught the owners insulting the manager, Awais, who has been working for the cafe for the past nine years just because they were ‘bored’.

Dia started the conversation with Awais by saying, “How many classes have you taken for English?” To which Awais responded, “Three,” Uzma cut in to pass on a comment saying. “Three years, you mean?” Dia then said, “Three Whole Courses!” The two then laughed hysterically.

Uzma then asked, “Could you please speak to everyone in English and say a sentence?” Awais knew his job was at stake, so he uttered a line with the best of his capability. Dia then said, “Shabaash!”. Uzma added, “So, this is our manager who has been with us for nine years. This is the beautiful English he speaks.” Dia concluded, “This is what we paid for.”

Here is What Pakistani Celebrities Have to Say About the Matter: 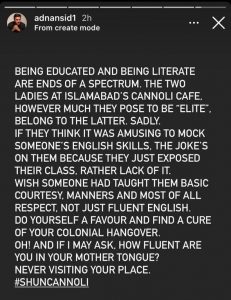 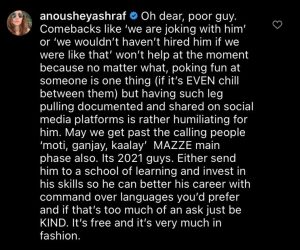 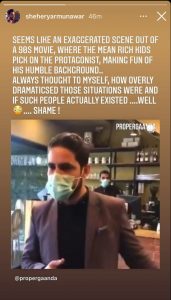 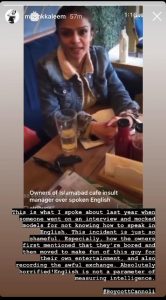 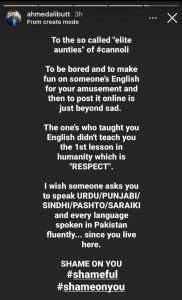 People are calling out the owners for the prejudice. This can be counted as workplace harassment for men.

To the female owners of Cannoli who filmed this man Awais and made FUN of his English, this is called WORKPLACE HARASSMENT and what you two privileged BURGERS did is the most DISGUSTING thing. ENGLISH IS NOT THE MEASURE OF INTELLIGENCE!!!!#BoycottCannoli pic.twitter.com/LLuqUUONiI

Disgusting and shameful!
what a sick mentality, I think language is just a way of communication. However, in different country, speaking Eng makes you feel elite or a kind of superior than others. English is just a language not to define how capable someone is. #BoycottCannoli pic.twitter.com/bA7XmyQB1D

Perfect example of
"prhe likhe jaahil "
Graduating from a good college studying from a Good School Doesn't mean You are Mannered or educated! 💔#BoycottCannoli pic.twitter.com/95epE7vIZF

Awais at least tried improving his English through English classes. But years of education couldn't bring any class to Uzma and Diya #BoycottCannoli

This is the most disgusting thing I have seen on Twitter today belittling the staff if they can’t speak English. I don’t know when would this vicious upper class come out of this English language complex & stop judging people on their Eng language skills#boycottCannoli #cannoli pic.twitter.com/acRtsp6FEx

The owners have now restricted their social media accounts that will refrain people from commenting on their content while also leaving a “so-called” apology which of course people aren’t buying.

Just spoke to Awais. He’s in high spirits and was very professional. We have made him an offer let’s see ❤️

The power of social media truly appals me on days like these when I see some good people are still left on this planet. Hopefully, Awais will move on from these sham owners and find a place that’s worth it! No justification can ever explain why the ladies thought this was just a little ‘gup shup’ with their staff.