“My Guards & My House Workers Were Invited to the Wedding,” Shahveer Jafry Distances Himself from the Derogatory Sign Board at Garrison Gold Club

Shahveer Jafry is one of the most popular Pakistani YouTubers, with a whopping 3.03 million subscribers on the video-streaming platform. He is famous for his comedy sketches on the platform. The star recently tied the knot with fashion designer Ayesha Beig in star-studded events. It is safe to say that he received a lot of media coverage on his big day because of his popularity.

Photos and clips uploaded by fellow YouTubers, actors present at events, Shahveer himself, and media houses did numbers online. Fans were following Shahveer’s big day. While all eyes were on the couple and every little detail, a photo from the reception started making rounds online due to a signboard.  The signboard said, “Drivers & Guard are not allowed inside during function.”

Fans felt angry and disgusted to witness this behavior at such a big star’s wedding assuming it was the host’s fault. A lot of backlash was received on the image online. Shahveer commented on Wow 360’s post on Instagram, distancing himself from the derogatory signboard to clear the air. 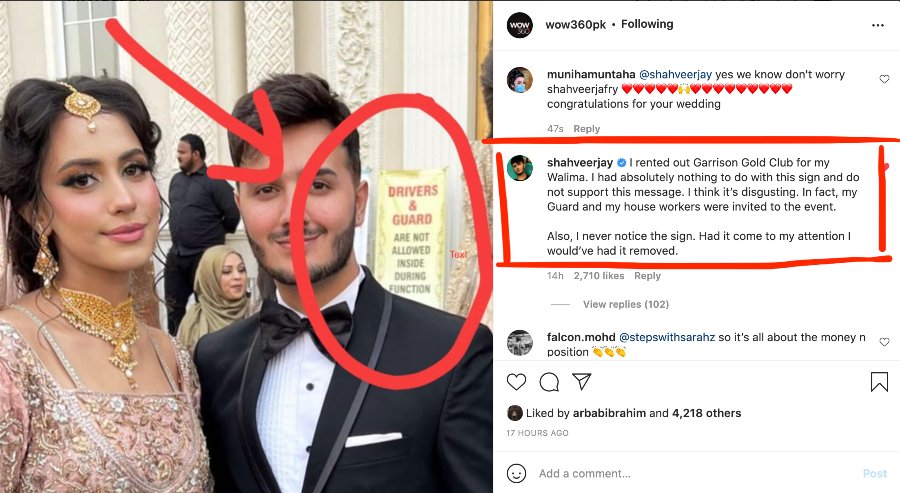 He commented that he feels the board was disgusting, “I rented out Garrison Gold Club for my Walima. I had absolutely nothing to do with this sign and do not support this message. I think it’s disgusting.”

In December 2020, the rumors of Ayesha and Shahveer’s engagement were making rounds on social media. He later laid them to rest with stunning pictures of himself with his fiancee on his Instagram account, making it official.

Just recently, the YouTuber came out with his clothing line named “STY.”

Organizers of the 2nd annual Pakistan International Screen Awards (PISA’21) – to take place at the stunning Madinat Jumeirah, Dubai, on November 5th, 2021 – has revealed the exciting list of 24 award categories for PISA ’21, along with the diverse and eclectic nominees.

Saudi Women Parade their Camels in a Beauty...