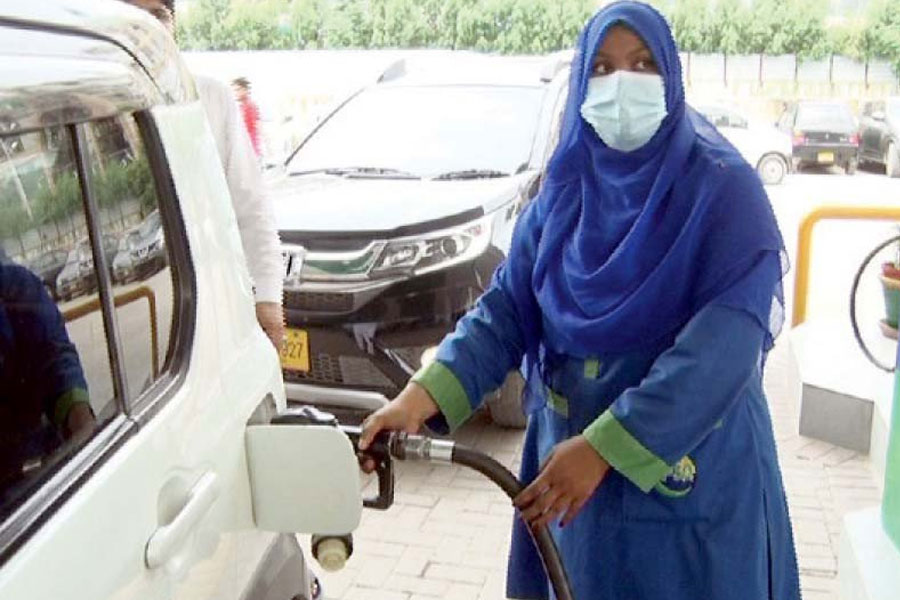 Saman Ayub is a young 24-year-old who has decided to break stereotypes by working in a male-dominated field! Even though it is still a rare sight, we have started to see women employees working at petrol stations along with their male counterparts.

While Saman still faces criticism for working in this line, she is determined to take those who point fingers at her head on to earn a stable livelihood for her family in this time of high inflation.

Unfortunately, Pakistan is one of the countries which is still far behind when it comes to gender equality. However, young guns such as Saman have made it their mission to change the narrative.

Residing at Korangi Crossing, Saman Ayub started working at a gas station in Clifton during the COVID-19 outbreak. The pandemic had forced this young woman out of her home in search of a job that could provide for her family.

“When the coronavirus broke out two years ago, I decided to play the role of a son for my parents,” Saman told a local publication. “I was fed up with inflation and unemployment during the pandemic,” she added.

Saman decided to disregard the social taboos and became a contributor to the family’s income. “I have five sisters and one brother and we all live together with our parents,” she said, adding that being the second eldest among the siblings she took it upon herself to share the responsibilities of her father.

“Petrol pumps are filled with men of all sorts,” she said, adding that she wanted to become a nurse but had to give up her dream due to unfavourable circumstances. “I was trained in various aspects of working at a petrol pump, including capping, refuelling, using machines to charge credit & debit cards, and dealing with customers,” she said. “Now, I can do everything without any supervision,” she added.

On the other hand, Saman had always dreamt of being a nursing professional to help and serve humanity, unfortunately, she had to give up on her education after completing her Matriculation because it had become hard for her family to bear the expenses.

“We have to deal with all kinds of people every day. Some are good and some are bad. If you treat them well, nobody will be bad,” she said.

She admitted that some of her relatives criticized her for working in a men-only environment. “No one can see a woman feeding on her own labour, but no one will feed you even if you are starving,” she said in reaction to the taunts and criticism she had to face.

Saman believes there is nothing that men can do and women cannot. “Everyone can do everything,” she said. “Whenever I come across an angry customer, I smile and walk away because I have been trained to control my emotions,” she said, adding that she does this even if it is the customer’s fault.

Saman said people say that it is a men’s job and women are not fit for it. “I say that I earn by hard work and not by begging,” Saman said, adding that she ignores discouraging people. “But there are also good people who encourage girls like me,” she said.

On Women’s Equality Day, Saman said her message to women is to be resilient and join any occupation or work no matter how big or small it is. “No job is difficult. If men can do it, women can also do it,” she said. “If girls step forward and accept economic challenges, then we can surely develop into a prosperous country,” she said.

What do you think about this courageous young lady? Share your two cents with us in the comments below.