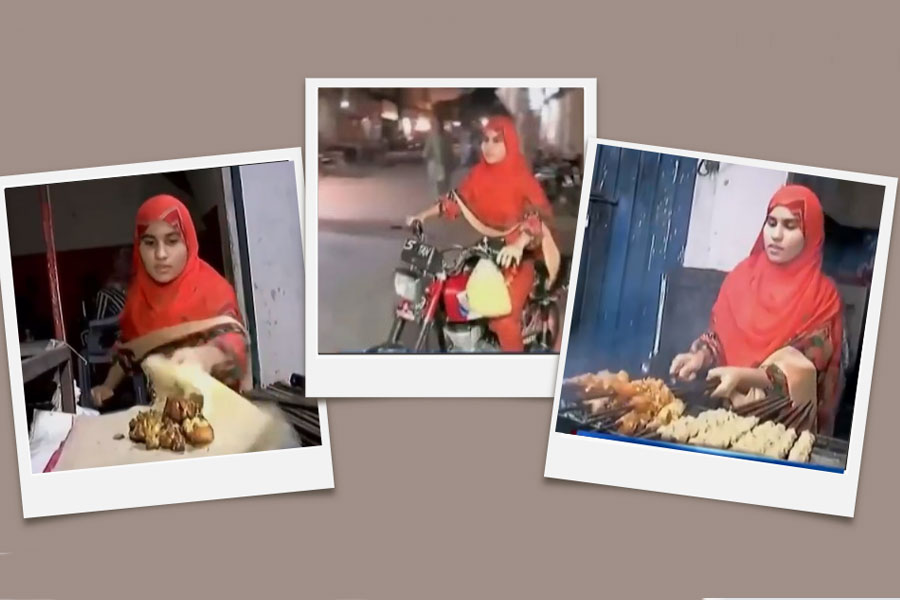 Faislabad’s Misbah Mehar is an example of strength, empowerment, and bravery. This young woman spends her days studying, while at night she helps her father.

Misbah works at a roadside restaurant as a cook. She made delicious barbeque from kabab to chicken tikka, she can make it all. Those who live near and far come from different neighbourhoods to eat her cooked food.

Misbah wants to join the Pakistan Army, she did not want to be a part of the profession always, but after she started to lend her father a hand, she joined it. She has been helping her father for 8 years now.

She even rides a bike and delivers piping-hot food to nearby locations as well.

During an interview with ARY news, her father shared that he was extremely proud of his daughter and that she has fulfilled the responsibilities of a son, for him his daughter is no less than that.

Misbah is an inspiration for young girls who do not let their financial circumstances come in the way of their dreams. Another example of this is  Karachi’s Alisha Jameel.

In a male-dominated society and profession, females find survival a hard task, while many give up, there are young and determined women like Alisha Jameel who are a ray of hope.

Belonging to the Drigh Road locality, Alisha is the youngest daughter of the late rickshaw driver Abdul Jameel. Her father’s untimely demise created tension in the household.

With no males in the household, it was up to his daughters to find a way out of unemployment with the rising inflation. That’s when Alisha decided that she will make her father proud while breaking the shackles the male-dominated society has put around her ankles.

On the other hand, Mahnoor from Lyari is also doing whatever it takes to provide a meal for her children at the table, even if it means driving a high-roof.

After taking a divorce from her former partner, Mahnoor took up the responsibility to raise and feed 3 children on her own. That is when she decided to take control of her life for the sake of her children and sit in the seat that has changed her life.

Kudos to these amazing ‘Iron Women’ for not giving up and becoming an example.
Stay tuned to WOW360.
FaislabadMisbah Meharpakistan
0 comment
0
FacebookTwitterPinterestEmail

Atiqa Odho Advises Women to Walk Away from Toxic Relationships