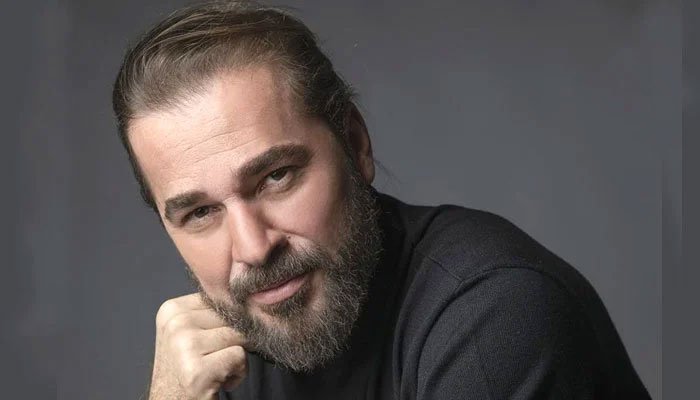 Ertugrul Ghazi’s main lead Engin had a virtual meeting with three terminally ill kids from Make-A-Wish foundation recently- the event was hosted by the beautiful Ayesha Omar and the kids were over the moon as their dream came true.

A video was making rounds on social media about Engin visiting Pakistan to meet the little fans who had expressed their desire to meet the hero, unfortunately, due to the current situation, the actor couldn’t come to Pakistan but fulfilled the kids’ wish by making an appearance virtually.

Make- A- Wish Foundation and the board of directors had already helped make over 13,000 children’s wishes come true for precious Pakistani children. With the help of the the Honorary Consul General of Turkey, and Make-A-Wish foundation, a special event was arranged that turned out to be a beautiful evening. 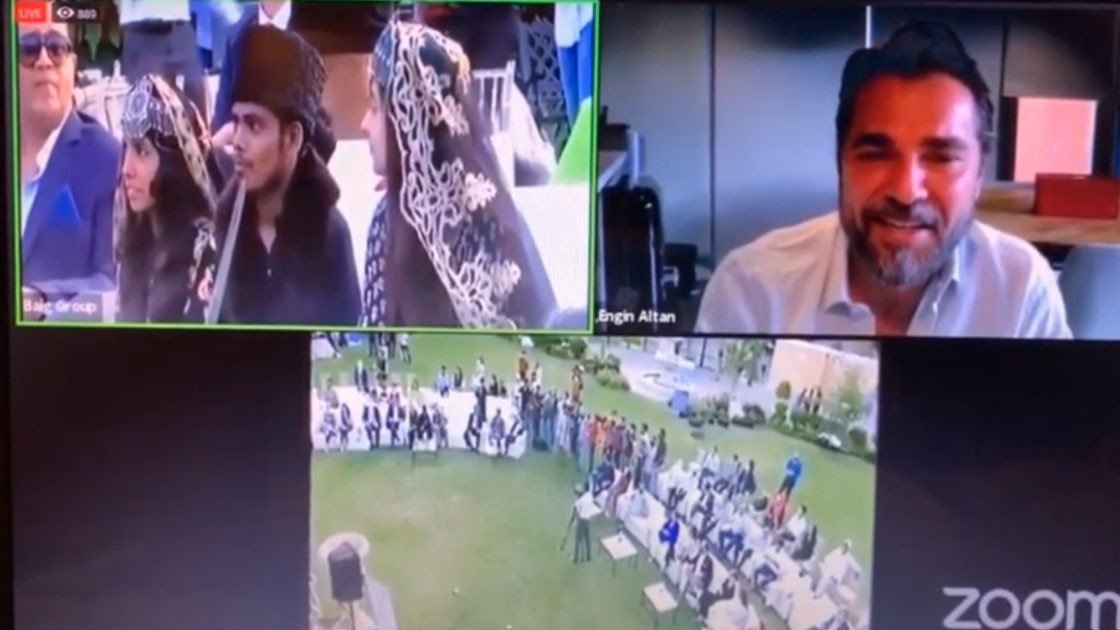 Hosted by the talented Ayesha Omar, the evens started off with the recitation of the Holy Quran, after which the organization and the kids were introduced. The names of the kids were  Sidra, Fizza and Sohail- they had dressed up like Ertugrul characters and were delighted to meet the star.

The ceremony was attended by the Turkish Concul General Tolega Ucak, and other prominent Pakistani stars such as Zeba Bakhtiar, Humayun Saeed and Nadeem Baig.

. . A few days ago, 4 terminally-ill children expressed their desire to meet their hero, Ertugrul @enginaltandzytn . It is not just these children but millions of Pakistanis who would love to meet this fantastic Turkish Actor, including me. @makeawishpakistan @ishtiaq.baig.official and the board of directors who have helped to make more than 13,000 such wishes come true for thousands of precious Pakistani children, took it upon themselves, with the help of the the Honorary Consul General of Turkey, to make this meeting happen. Due to the current situation, a physical meeting wasn’t possible, but a virtual one was. Only 3 of the kids were able to make it as one was not allowed to travel to Karachi by his Doctor. Today, is the day their wish was full-filled. I’m extremely honoured and grateful to have been asked to host (and translate for) this beautiful evening. . 🤲🏼🌹❤️✨🙏 . . #ayeshaomar #turkey #pakistan #makeawish✨ #ertuğrul #ertugrul #pakturkeyfriendship

A video of the Turkish actor Engin Altan Duzyatan, the titular actor of the historic drama series Ertugrul Ghazi, was making rounds on social media, as he announced his plans to visit Pakistan on August 18th 2020, Tuesday.

Ayesha Omar received immense appreciation and felt honored and grateful to be a part of this event and representing Pakistan at this level. She even received a letter of appreciation from the Make-A-Wish Foundation, which the starlet then shared on her instagram.

🌹🕊 . 🇹🇷❤️🇵🇰 . This beautiful jora was lovingly sent to me by @elanofficial and @khadijahshah for Bakra Eid, but I saved it for later. Excellent decision. It was perfect for this magical evening. Thank you Khadija. 😍✨ @makeawishpakistan . Did my own makeup and hair and also styled it myself, with help from @sanya.sohail 💪🏼💋 . . #ayeshaomar #makeawish #pakistan #turkey #pakturkbrotherhood #pakturkfriendship #keepitreal #host

Am overwhelmed with the love, appreciation and support I’ve received in the last two days for hosting and representing Pakistan, on this beautiful evening, from all of you, and I mean each and every single one of you! This was one of my favourite evenings this year and the 3 children who got to met @enginaltandzytn virtually are wayyyyy over the moon. Thank you for having so much faith in me, my soul fam…am so grateful and honoured! it’s my turn to be over the moon…🥰🥰🥰 @ishtiaq.baig.official . 🌕🙏🌹✨ . . #makeawish #wishgranted #ayeshaomar #host #pakistan #turkey #pakturkfriendship #pakturkeybrotherhood . P.s. You can watch the whole event on my igtv. I posted it 2 days ago.🕊🇵🇰🇹🇷 @makeawishpakistan

The video has taken the internet by storm and Pakistani fans are over the moon after hearing this news. They can’t wait to welcome Engin to their homeland.

He says, “Hello Pakistan, I will be meeting make-a-wish children on 18th of August, see you soon.”

Watch the video clip below

The video has been shared several times by social media pages and after Esra, fans desperately want Engin to affiliate himself with Pakistani media and brands.

However, seems like the fans will be disappointed this time as well. Because Make-A-Wish Foundation very recently shared a tweet, saying Engin will be coming ‘live’ on Make a Wish Foundation Pakistan’s Facebook page to chat with the three children.

Here is the official tweet shared almost 2 hours ago:

Watch Engin Altan Düzyatan talk to 3 of our Wish Children to fulfill their most cherished wish of meeting their favourite actor. We appreciate the support of our sister affiliate Make-A-Wish Türkiye in making this Wish possible.https://t.co/8vlTjLViYY#ErtugulGhazi #Ertugrul pic.twitter.com/vcDJasLAZB

We are assuming this means that the actor won’t be visiting Pakistan in person and will be meeting the children ‘virtually’. Let’s hope the actor comes to Pakistan soon.

Ever since Turkish drama Ertugrul has aired on PTV, the lead characters have won the hearts of millions of Pakistanis following the show. His incredible portrayal of Ertugrul Ghazi is lauded by everyone worldwide and both the lead actors, Engin and Esra have received immense popularity.

Earlier, Engin Altan visited the Consulate General of Pakistan in Istanbul and wished his Pakistani fans Independence Day on August 14.

Here are some of the pictures and a short video clip of the actor in which he can be seen wishing Pakistani fans a very happy Independence Day, shared by Pakistan’s consulate in Istanbul on Twitter.

Thank you to @eadksk__ for visiting our #Consulate General Today. You’re undoubtedly the most famous #Turkish Artist in #Pakistan right now and we wish you all the best in your future projects! #EyWallah@BilalKhanPasha @SaleemNiazi_FSP @eadksk__ pic.twitter.com/LM4b0bC5xp

“Thank you to @eadksk__ for visiting our #Consulate General Today. You’re undoubtedly the most famous #Turkish Artist in #Pakistan right now and we wish you all the best in your future projects! #EyWallah,” the Pakistani consulate office tweeted with adorable photos.

Engin Altan, who played the role of Ertugrul Ghazi, visited the Consulate in Istanbul at the invitation of Pakistan's Consul General Bilal Khan Pasha and conveyed a message of Urdu congratulations on Pakistan's Independence Day. pic.twitter.com/xqLg3U9fS9

He was even presented with the traditional Sindhi ajrak

Today #ertuğrulgazi artist @eadksk visit Pakistan embassy in Istanbul and meet the consulate general @BilalKhanPasha on independence day of 🇵🇰 .We wish him great future a head here and there too. #independencedayPakistan#RespectNationalFlag pic.twitter.com/9Q60KrwYtP

Many of the Ertugrul cast members have expressed interest in visiting Pakistan; seems like COVID is the only thing holding them back.

Not only Ertugrul, but the female lead Halima Sultan, played by Turkish beauty, Esra Bilgic, has been roped in by famous Pakistani telco brand Jazz for their latest super 4G campaign. Esra has also been endorsed by the mobile brand, Qmobile-  the starlet has been making waves in Pakistan and fans don’t seem to get enough of her.

Watch Esra in Pakistani advertisements below:

Recently, the famous anchor Waseem Badami did a live interview with Cengiz Coşkun who plays Turgut Alp in the historic drama series. The interview was long awaited and quite interesting, to be honest; the video has reaped over 300 million views till date.

Schools Reopening in Pakistan: How Has COVID-19 Impacted the Lives of Students?