Just a few weeks ago, Pakistani actress Minal Khan got engaged with Ahsan Mohsin Ikram. We see their adorable clips and pictures popping on our feed often. Yesterday, when karachities witnessed their first monsoon rain, the two were spotted having the time of their life in each others company, as anyone should. After all, the weather was great!

Ahsan recently did a Q/A question with his fans on his Instagram. A question asked by someone cracked us up. The question said, “Do you ever get confused between Minal and Aiman?” 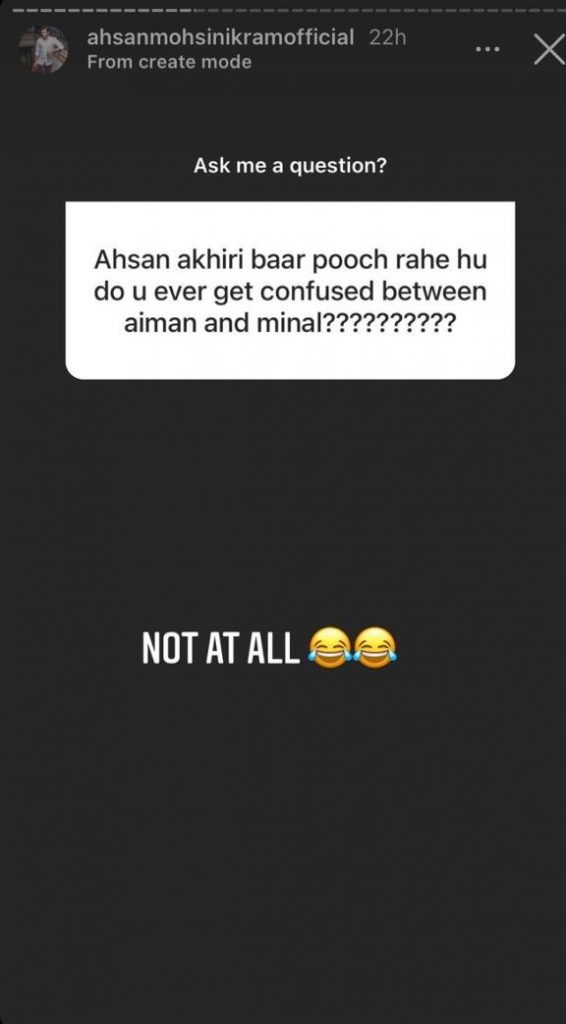 It is not unusual for people to not recognize their fiance if they have a twin who looks exactly like them, sounds like them, and has the same habits to a certain extent. Much to our surprise, Ahsan replied: NOT AT ALL. 10/10 for Ahsan for recognizing his fiance.

However, the circumstances are not the same when it comes to Aiman’s husband, Muneeb. Some time ago, Minal revealed that her sister’s husband Muneeb sometimes gets confused between the two, and we find that hilarious.

During the Q/A session, Ahsan also revealed some interesting details about Minal. Someone asked why the couple always chooses to dine at a certain restaurant, and Ahsan replied that the fans should ask Minal in a cryptic message.

Ahsan and Minal have become a favourite couple in the industry at the moment.

Another funny question that we came across was a fan asking Ahsan to reveal something about Minal her fans already don’t know. Funnily enough, Ahsan replied, saying: After 12, she turns into a vampire.

Earlier this morning, Shaniera Akram took it to her Instagram stories to school Pakistani actress Minal Khan and fiance Ahsan Mohsin Ikram over road safety rules. Yesterday, Karachities experienced their first rainfall this monsoon season. Naturally, everyone was out and enjoying the rain and posting all the fun snaps on social media.

Your NADRA Vaccination Certificate is as Important as Your Passport, Here is How You Can Get it Online