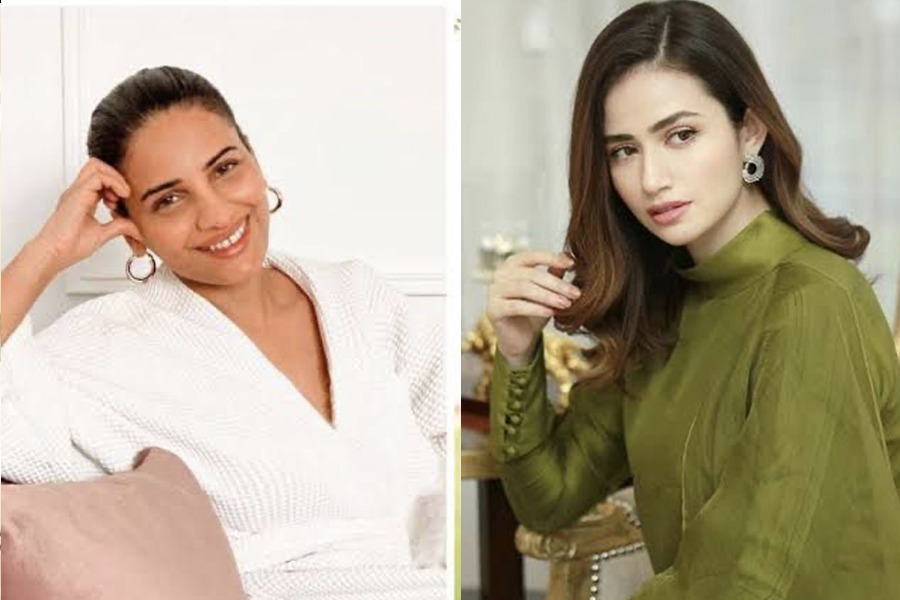 Clothing brand Rang Rasiya had signed Pakistani actress Sana Javed for their Eid Campaign. In the latest developments, they have announced that they are distancing ties with the actress after the allegations regarding her unprofessional behavior have surfaced on social media.

In an Instagram story, the brand representatives said, “In light of the recent allegations brought forth against Sana Javed, we at Rang Rasiya decided to disassociate ourselves from the concerned person who was before the main face of our Eid campaign.”

They further added that the incident between Sana and Manal occurred on their shoot, which they are deeply sad about, “The recent incident involving Manal Saleem and Sana Javed had occurred on our shoot for which we as a brand are deeply disturbed too.”

The brand went ahead and did a reshoot with another celebrity as they respected the public sentiment. They said, “We did a reshoot with another celebrity as we respect the public sentiment, despite the cost that we have borne. It is a request to the fashion fraternity to please be considerate towards the brands too who spend millions on such shoots apart from their time and effort.” 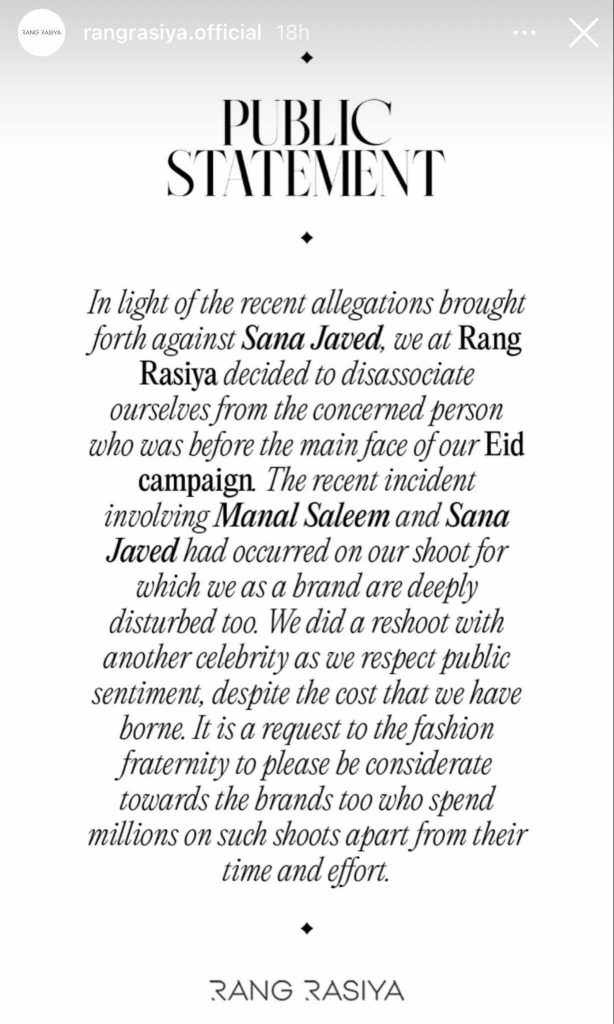 This is not the first time a brand has distanced itself from a celebrity drowning in allegations and controversy. It happens pretty often so that the celebrity’s image doesn’t impact the sales of the brand.

Sana Javed has filed a case against those running a ‘smear campaign’ against her. She wrote in an Instagram post that the past 72 hours, she has “been subjected to all sorts of lies and fabricated stories, bullying, hate speech and threats.”

“It is imperative to state that our client [Murtaza] has at no point in time ever had any relationship of whatsoever nature with Ms. Manal Saleem, not of any sort of friendship nor as rivals you state to be colluded against you,” read the notice.

The post further read, “Please note that as per Section 3 of the Defamation Ordinance 2002, to constitute the legal wrong of defamation, you need to prove that the statements were made by our client about your client [Javed].”

Sana Javed Files Legal Notice, Says a ‘Smear Campaign’ Has Been Initiated by a Group of People Against Her. Read the full story here:

Pakistani actress Sana Javed has finally responded to the controversy surrounding her unprofessional behavior on social media. The actress has filed a case against those running a ‘smear campaign’ against her. She wrote in an Instagram post that the past 72 hours, she has “been subjected to all sorts of lies and fabricated stories, bullying, hate speech and threats.” She highlighted that models and makeup artists coming out with stories is a properly planned strategy against her.