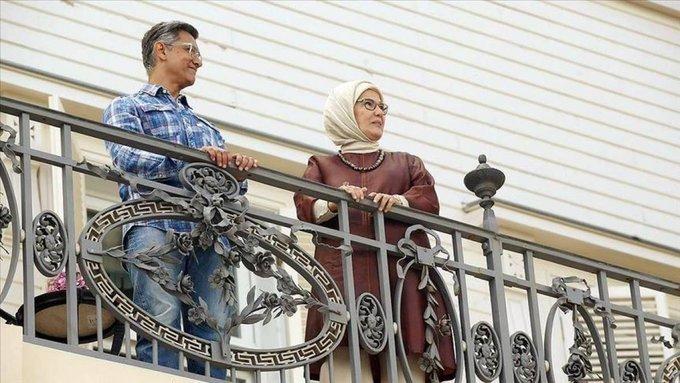 Bollywood Actor Aamir Khan’s recent visit to Turkey and his meeting with the First Lady Emine Erdogan has landed the actor in the midst of a controversy. Amir Khan has been in Turkey for the shooting of his upcoming movie, Laal Singh Chaddha, planning to be shot from October this year.

However, upon his visit there, the actor met the First Lady of Turkey, Emine Erdogan and the pictures have gone viral. Indians have slammed the actor on Twitter for supporting Turkey’s ‘anti-India’ policies and want to boycott his upcoming film.

I had the great pleasure of meeting @aamir_khan, the world-renowned Indian actor, filmmaker, and director, in Istanbul. I was happy to learn that Aamir decided to wrap up the shooting of his latest movie ‘Laal Singh Chaddha’ in different parts of Turkey. I look forward to it! pic.twitter.com/3rSCMmAOMW

The First Lady Erdogan tweeted pictures with Aamir and wrote, “I had the great pleasure of meeting @aamir_khan, the world-renowned Indian actor, filmmaker, and director, in Istanbul. I was happy to learn that Aamir decided to wrap up the shooting of his latest movie ‘Laal Singh Chaddha’ in different parts of Turkey. I look forward to it!

However, the actor is being bashed by Indians for showing blatant support to the cause of the Hagia Sophia mosque in the land of Turkey. Now they want to boycott all the Khans in Bollywood and their movies, calling them out as radicals and traitors.

#AamirKhan has blatantly made a statement by meeting #Turkey's first lady, #EmineErdogan that he supports- conversion of Hagia Sophia in2 a mosque and Turkey's Anti India stand on #Kashmir.Let's into further signs of treachery & betrayal but boycott all future movies of the Khans

Moreover, people called him a hypocrite for shooting an Indian, Hindu movie but supporting anti-Indian activities and policies. They are also angry with Aamir Khan for refusing to meet the Israeli president but choosing to meet the First Lady of Turkey; this for them was a deliberate choice made on Amir’s part.

Aamir Khan Refused to join Nationalist Israeli PM Benjamin Netanyahu when he was in Mumbai.

But he Went to Turkey to meet Turkish PM who supports Pakistan on Kashmir issue and also gave anti-india statements.

Indians believe since Turkey’s friendship with Pakistan is flourishing and Turkey’s President has openly supported Pakistan’s stand on Kashmir, Amir meeting his wife is a clear sign of betrayal.

Turkish president is backing Pakistan's stand on Kashmir and Indian Superstar Amir khan is meeting his wife. Celebrities from smaller countries are more loyal to their motherland than bollywood people ever would be.
According to report
"The meeting was requested by Khan" pic.twitter.com/KOCmAsOJff

Some went as far as calling him more dangerous than terrorists. There is a lot of hate that has stirred for the actor and Laal Singh Chadda is very likely to suffer in terms of business.

#तुर्की_भाग_आमिर_खान#AamirKhan is a fake Indian, he never support india . He is more dangerous than Islamic terrorists.
We need to think before watching the movie of Aamir .now ,this is time to boycott movies of terrorist supporters including #Aamir. 😡😡 pic.twitter.com/UJNlIKOfOe

Yes Mr. #AamirKhan People of India were misguided till 2014 and now they are aware of traitors. Also, Mr Modi is a PM 😎 and you are a looser. pic.twitter.com/Fe5aIr5ndk

However, there were some who supported the actor and called his meeting with the First Lady a harmless, business tactic:

He is a shrewd businessman first, actor and artist second, for him business comes first. He did what he felt was right. To each his own. #AamirKhan

He was shooting in turkey, every actor visits head of state where they are shooting to get ease in approvals

Those who r showing unnecessary outrage how they see meeting with Musharraf of Sudhir pic.twitter.com/nXvo60cBYc

He was shooting in turkey, every actor visits head of state where they are shooting to get ease in approvals

Those who r showing unnecessary outrage can have a close look pic.twitter.com/30ZqflPwQ2

We, as a country, have never spoken anything against Turkey's verbal aggression against India. We as a govt haven't lowered any diplomatic ties despite their repeated alignment with Pakistan. But we expect #AamirKhan to do all this and more on behalf of the govt? And India?

The likes of #AamirKhan can go ahead and meet the top most leaders of Turkey, a nation which is now very friendly with the enemies of our country, is because they fear zero retaliation from citizens of this country.

Many went ahead and even watched Dangal.

Each one teach one…

While visiting Islamabad earlier this year, Turkish President Recep Tayyip Erdoğan compared the situation in Kashmir with the Gallipoli campaign of the World War II.

“Today, the issue of Kashmir is as close to us as it is to you [Pakistanis]… Such a solution (on the basis of justice and fairness) will serve the interests of all parties concerned. Turkey will continue to stand by justice, peace and dialogue in the resolution of the Kashmir issue,” the Turkish President Recep Tayyip Erdoğan had said in a joint session of Pakistan’s Parliament.

According to an official statement on the website, during his meeting with the first lady of Turkey, Amir spoke about his association with social responsibility projects. Emine Erdogan appreciated the actors efforts of addressing the social causes and issues in his Bollywood movies.

“Mr Khan stated that he would complete the shooting of his latest film ‘Laal Singh Chaddha’, which couldn’t be completed in India due to COVID-19, in Turkey, and invited First Lady Erdogan to the film set,” the press release said further.