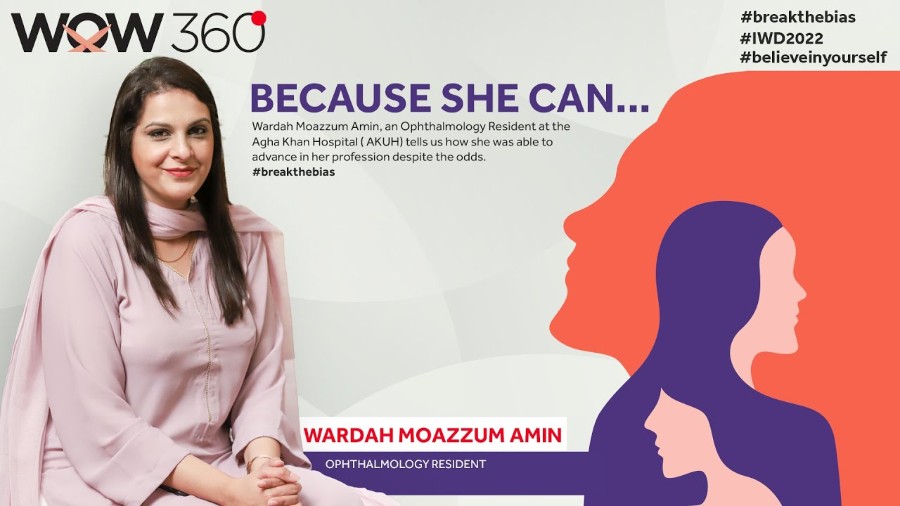 In Wow 360’s series “Because She Can, “ we spoke to Wardah Moazzum Amin, an Ophthalmology Resident at the Agha Khan Hospital (AKUH), on how she could advance in her profession despite the odds.

A mother of a young daughter, Wardah’s determination and a supportive environment have helped her overcome barriers and break the bias. As per the stats disclosed by the Pakistan Medical and Dental College, females make up 60% of the students graduating from medical college.

According to the Medical Council of Pakistan, out of this 60%,  77% drop out of the medical profession. This has been highlighted in Shan’s digital campaign #OathForHer.

In Pakistan, women usually get married after completing their education. Being a doctor counts as a great advantage for women to find better proposals. Once they get married, it depends on their husbands or in-laws whether they allow them to join the workforce or not.

A huge percentage of these doctors with degrees are never allowed to join the workforce, while a small percentage exiting due to other common reasons such as childbirth, lack of a support system, etc. Wardah is part of the lucky 33% of women that have successfully joined the workforce after completing their education.

She says, “I had a really good support system. My spouse has been very supportive. He himself is a doctor, so I guess he understands the requirements also; my parents and in-laws have been supportive, so I have been lucky in that sense, but I also had this thing in my mind that I’m never going to stop. I had this thing in my mind that I would continue to practice one way or another. Before I even got married, I told my spouse about it, so my inlaws were also aware of it”.

In Pakistan, 77% of Female Doctors are Unable to Practice Medicine After Getting their Degree, Shan’s Latest Ad Highlights this Social Issue. Read the full story here:

Shan Food’s latest ad highlights the social issue of women doctors not practising medicine after receiving their degrees. This is due to the social-cultural barriers that limit women from entering the workforce or at times having to drop out because of societal or family pressure. As per the stats disclosed by the Pakistan Medical and Dental College, females make up 60% of the students graduating from medical college.