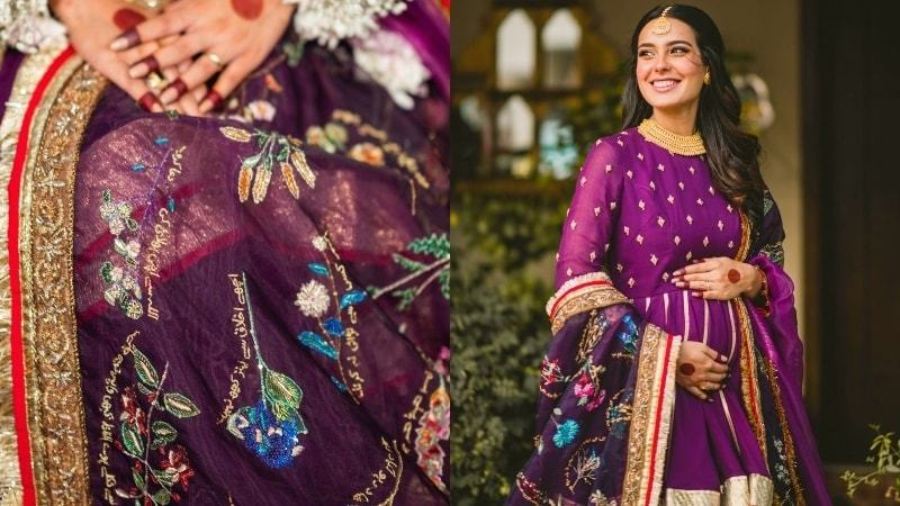 Pakistani actress Iqra Aziz and Yasir Hussain are going to become parents soon. The couple announced the news on Instagram that they are expecting their first child in July this year, along with pictures of the couple at their godh bharai rasam.

People noticed that Iqra’s dupatta wasn’t any ordinary one. It had 100 prayers stitched in Urdu with embellishments and zardozi work by designer Fahad Hussayn and team. We have previously seen Zara Shah Jahan do something similar for Bukhtawar Bhutto, which made us think this is the new trend in town.

In an insta post, the designer congratulates the couple: “ Sau Duaien” is specially curated with lots of love to celebrate Iqra Aziz (an actor & a very dear friend) motherhood. 100 handcrafted prayers with embellishments and zardozi work have been written on the dupatta! With lots of love & prayers, May God protects you from evil eyes.

The designer told a local publication that the actress had requested something that she can pass on to her child. Fahad thought of the concept of putting 100 duaas on the dupatta, which Iqra worked with her husband and mother.

The prayers stitched on dupattas include “logon ke saath bhalai karo gay toh log bhi tumharay saath bhalai karein gay” (be kind to others, and they will be kind to you) and “ilm sub say bari daulat hai” (knowledge is the greatest wealth).

The couple surely did steal the limelight!

Yasir was questioned by the host Vasay Chaudhry on a talk show if there were any gate crashers at his wedding. The star laughed at first and, after being insisted, said, “Our wedding card was on social media, so technically, everyone had it. One of the famous personalities that attended the event ‘forcefully’ was Nausheen Shah.”