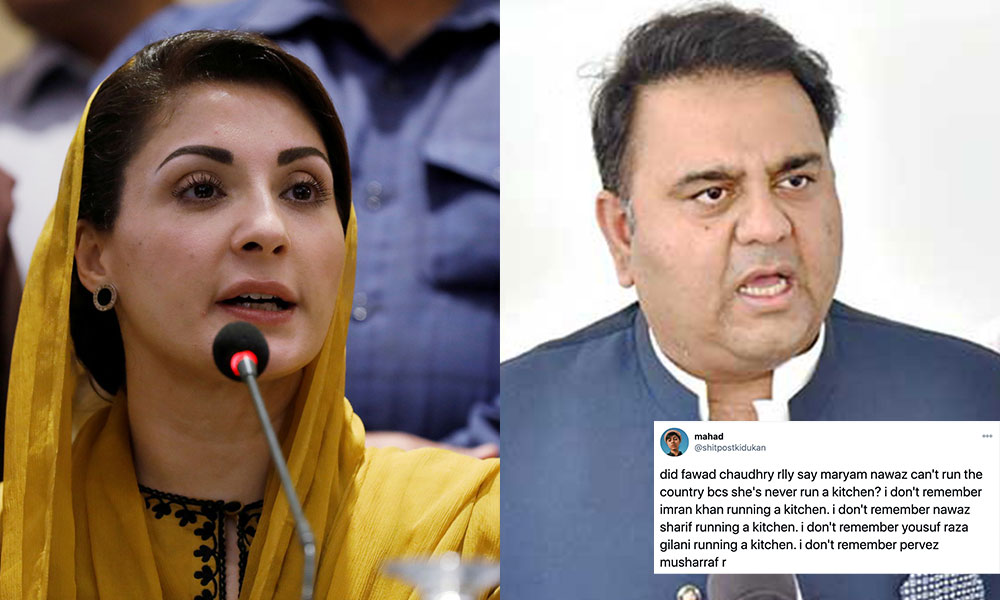 In a press conference, Federal Minister for Science and Technology, Fawad Chaudhry spoke about the PDM’s stance at length. However, something that ticked off quite many people was his remarks towards Maryam Nawaz, daughter of former Prime Minister Nawaz Sharif.

Fawad starts off by talking about how he feels as if Bilawal and Maryam have taken up positions in their parents’ respective political party’s and are signing up to become potential candidates for the Prime Minister’s seat as if this is some kind of internship, and that they can follow their parents’ footsteps steadily.

He then said Maryam Nawaz or Bilawal Bhutto had not worked a single day in their lives. They are not fit for the premier’s seat. He then started throwing sexist remarks at Maryam Nawaz, pointing out that she must go and get a manager’s position in one of her uncle’s factories. She, who has lived under her father’s roof and had servants and luxurious available at her disposal by looting the country’s money, has never even run her kitchen, which makes her unfit to run Pakistan, a nuclear state.

While we partly agree with Fawad Chaudhry’s statement, we discourage throwing sexist remarks at women. Why is it that women fighting for power in any prospect are reminded that their place is in the kitchen? Are all Pakistani men in politics run the kitchen before they run the state collectively? Is that a criterion? Chaudhry passing such a remark on national TV shows the world that even though it’s 2020, we are quite behind in our time.

Hein? Working in a kitchen is what my male bawarchee has always done ….

Disastrous analogy. There is no justification for a federal minister to belittle the gender of 110 million citizens be relegating them – us – to the kitchen.

I am so very disappointed. I genuinely thought Fawad Chaudhry was progressive. pic.twitter.com/4LBqdDVypL

Fawad Chaudhry must have spent his entire life in a kitchen. Not a pmln supporter but he needs to shut the fvck up. pic.twitter.com/iwC7zP84Px

you can criticise someone for their character. but never their gender. ajeeb sexist remarks apne paas rakho.

Remind me to ask Mr. Fawad Chaudhry if he cleans his kitchen on a daily basis, hence his ‘suitable’ appointment as a Minister who runs the country.

Note: You can’t laugh & support this statement just because you hate MNS or PMLN. Misogyny IS misogyny. pic.twitter.com/isI2cfWjgT

We thought Fawad Chaudhry was progressive. Have something to add? Let us know in the comment box below.

Women’s Special: Here Are 5 Reasons Why Self Love Should Top Your List in 2021