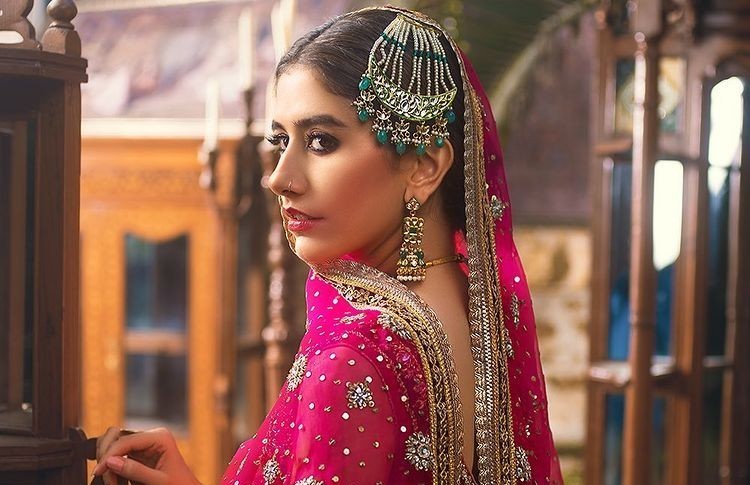 Pakistani actress, Syra Yousuf is back with yet another hit photoshoot, this time around, donning Zainab Chottani’s ethereal bridal lineup that reminded us of the Mughal era. The line up comprises of a total of 4 looks for Syra in which she looks breathtaking.

These royal numbers are set in dramatic festive colours, including rosy pink, maroon, red, contrasting colours in gold, emerald green, and copper present in jewellery and kaam. Might I add, the set up for the shoot generates conventional celebratory feel right on the spot.

Surkhi is an expression of the royal Mughal era. This classical red front open gown unveils the vintage craftsmanship of kora, dabka and kundan work.

A rose-pink sleeveless Kurti and a deep back intricately adorned with kora, dabka, and thread embroidery on neckline and borders. The jhoomar overall adds extra oomph to this number!

Syra Yousuf has been part of Pakistan’s entertainment industry for quite some time now. There hasn’t been a single moment in her career where Syra’s work has received criticism from her very loyal audience.

Just recently her photoshoot with Shehryar Munawar was making rounds on social media.

Syra’s social media presence is what puts her out there under the limelight now and then. She is an Instagram favourite with a following of 1.5 million followers. She has worked in some hit Pakistani films like Superstar, Project Ghazi, Chalay Thay Saath, and Ho Mann Jahaan.