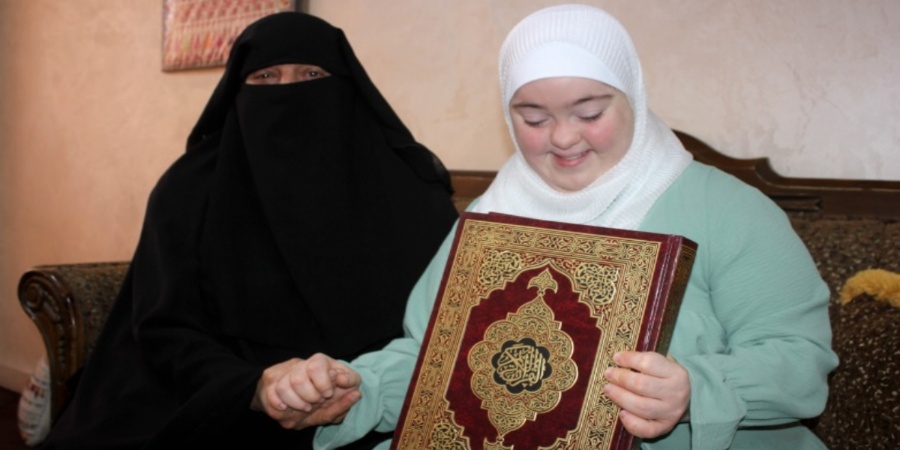 Jordanian girl Rawan Dweik has become the first female to memorize the Holy Quran while with down syndrome. The holy Quran is lengthy (comprises 30 paras), which means the task is a challenge in itself, considering Dweik did it while with a health condition. However, Rawan Dweik’s mother, Awatef Jaber, revealed how her daughter succeeded in accomplishing this goal while having a special health condition.

“I am Rawan’s mother (her father is deceased), and I am proud. I had 4 daughters and one son, and as a result of my son’s begging as he was alone and he was asking me for a brother, when I thought about that, Rawan came to me. Praise be to God; she is a gift from the Lord of the worlds; To increase my pride and honor,” she said.

Like any mother, Awatef was upset about Rawan’s arrival in this world with down syndrome. It is then she swore to God she will teach her to read Quran. “When I gave birth to her and learned that she has Down syndrome, and like any mother, I felt sad and upset, but I loved her very much, and I swore to God that I would teach her to read the Qur’an and if my Lord wrote to memorize it, and honored me also by preserving it.”

How Rawan Dweik Memorized the Quran?

Her mother explained that her daughter “Rawan was very smart”. The process began just as any beginning of a lesson taught by a teacher. Her mother began to teach her the shortest of the surahs, and she memorized very quickly, “so I enrolled her in school when she was 6 years old, and she excelled in it.”

“She studied to the seventh grade, and our Lord loved her with a sound pronunciation, which helped her to learn, but she refused school after that and went down at her will”, the mother added.

The Method of Memorizing

The learning process is different for all. For example, Rawan’s mother revealed that “Rawan was memorizing through writing, and she memorized Surat al-Baqarah within a year and a half and took the full mark, and when she came out of the exam, she prostrated to God a prostration of thanks.”

“Rawan continued to memorize the Qur’an (at a regular pace) for 7 years, and she completed it on the 29th of the last Ramadan (2021), and when she memorized one, two, or three parts, she was tested in them,” Awatef Jaber added.

Today, we see so many smart women with down syndrome doing phenomenal things in life. They are proving to be as smart as any other human being.

Based in Islamabad with Down syndrome, Pakistan’s first beauty blogger, Ridda Zahra Naqvi, has garnered a great fan following since she started uploading her video tutorials on Instagram. She has been praised for her efforts widely, not just by the masses but also by Pakistani celebrities. Reportedly, her first makeup tutorial video went viral on Instagram.