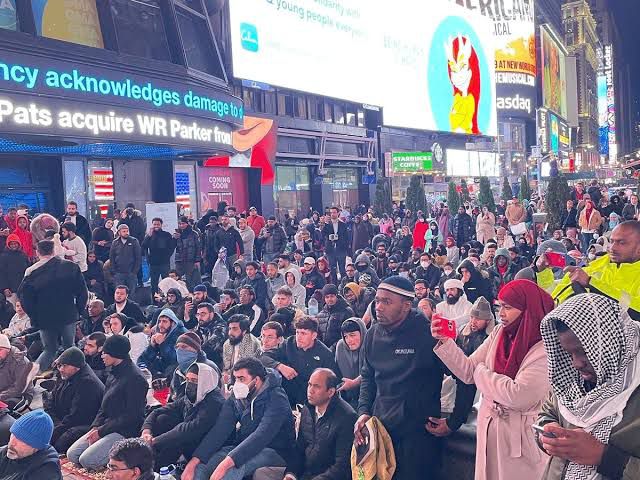 On the 2nd of April, hundreds of Muslims performed the Taraweeh prayer for the first time at Times Square, New York.

As reported, around 1000 Muslims broke their first Ramadan fast of the year at the city’s busiest street, Times Square. After iftaar, about 100 Muslims took part in the Taraweeh prayers. This was part of the Zam Zam Project, a one-of-a-kind event for Muslims.

The event was advertised as the “first-ever Taraweeh prayer in Times Square” on social media. While some Muslims were residents of New York City, others travelled from outside of New York to participate in the event. One thousand five hundred meals were provided to Muslims who were present at Times Square for free.

The event organisers spoke about the significance of the holy Islamic month’s observances and quoted verses from the holy book, Quran.

CBS News covered the event that took place in the heart of New York. They interviewed several Muslims from the crowd on occasion. While speaking to CBS News, the event’s organizer said, “We are here to explain our religion to all those that don’t know what Islam is all about.”  As per the organizers, the event aimed to show the world that Islam is a religion of peace.

Taraweeh is an additional nocturnal prayer performed by Muslims during the holy month of Ramadan, where parts of the Holy Book are read until its completion by the end of the month. Muslims fast for 30 days during this holy month.

Here are 5 Ways to Minimize Thirst in Ramadan. Read the full story here:

Ramadan in Pakistan begins tomorrow, and everyone seems excited to start fasting for the next 30 days. On average, a fast would last 15-16 hours which means you will be dehydrated severely if you do not utilize the hours after you break the fast. You will be severely dehydrated and will feel thirsty throughout the day. According to the Institute of Medicine, males require 3 litres of water. Females need 2.3 litres of water a day…